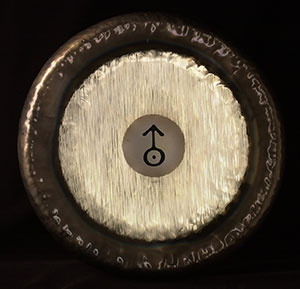 The planet Uranus is a harbinger of change. It moves against the flow of ordinary understanding, defying even the most powerful and monumental forces to carve a unique pathway through space. The Uranus gong resonates at a frequency that inspires us to break through our entrenched ideas and habitual tendencies to create something entirely revolutionary in our lives. It stimulates our electromagnetic system, “sparking” us toward greater creativity, individuality and resourcefulness. The sound bath given by the Uranus gong effects change in the reproductive system, restoring health and balance to the endocrine system and the reproductive organs. It calms spasmodic behavioral patterns and physical disorders such as epilepsy. As a ceremonial gong it summons the collective consciousness to be strong in the face of revolutionary change.