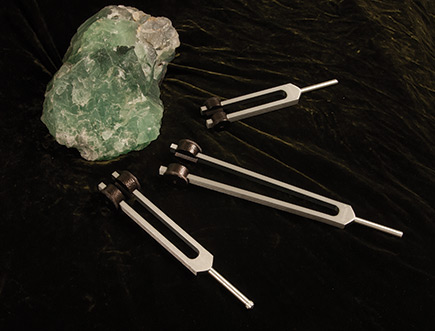 The Acutonics Sedna Tuning Forks were a response to the discovery of the newest member of our Solar System in November 2003, and the need to activate the archetypal messages, teachings, and synchronicities implicit in her arrival.

Controversially named after an Inuit sea goddess, nothing about Sedna is usual. Positioned beyond Pluto in the Oort Cloud, she expands and challenges our ideas and assumptions about the cosmos we live in and all of its workings and principles. She represents quantum leaps, new paradigms, multi-dimensions, non-duality, non-linearity, superconductivity, and super-creativity. Sedna rules sound, and the rich archetypal material provides us with access into the deep layers of the personal and collective unconscious, and into the super conscious and Universal intelligences.

As you deepen your understanding of the science, myth and associated archetypes that surround Sedna, there are key healing themes that emerge.

Betrayal: Our betrayal by others, to others, to our planet, to our medicine, to our spirit, to our soul. Forgiveness and Compassion: On every level where trust has been broken. Creativity: Connection to rebirth, to the creative and universal mind, to super creativity and to conception. Infertility and fertility, drought and drowning. Global View: Upholding higher law, global perspective, global ecology, global theology, global mythology, all residing in the One. Toxicity: Individual and ancestral, planetary, purging and purifying. Water: The mystery, magic, weight and infinite capacity, all elemental water issues or any correspondences. Transformation/Transmigration (death/rebirth): The old themes, worldviews, patterns, personal, ancestral, societal, cultural, gender based, elemental, planetary, are all that holds us back or brings destruction. Non-Linearity/Non-Duality: Ability to see the universe as an undivided whole, be a true Taoist, no differentiation of mind/matter, scholar/shaman, individual/planet. Ability to comprehend the soliton, the solitary wave, whose patterns and forms emerge out of the ground, are sustained, and die back into the field that gave it birth. Right Conduct and Responsibility: Understand right action, and personal responsibility, honor the animals and respect the larger cooperative. In the myth, Sedna withheld food from the hunters and brought violent weather if norms were broken.

The applications and sacred teachings of Sedna are deeply explored in Acutonics IX: Sedna Superconductor.