Gongs were among the first musical instruments to be made and played by humans. Historically, used in public settings, often to announce the presence of a spiritual, religious or political leader. They originated in the Far East, where they have a long mystical and spiritual tradition. Only artisans trained in the alchemical arts and purified in mind and spirit were allowed to pursue the craft of making gongs, and the process was shrouded in mystery and privilege. Gongs have been used in monasteries as aids to meditation and to exorcise evil spirits and demons of the mind. Their influence is felt to cleanse and purge anger, disillusionment and disease. 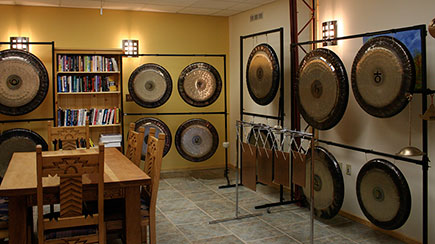 The Acutonics Institute of Integrative Medicine is a distributor of Paiste gongs a world-renowned supplier of high quality musical instruments. We have worked with them for nearly twenty years, since Donna Carey received one of the first complete sets of planetary gongs manufactured by Paiste. They have been crafting symphonic gongs for many generations, and have refined the art of gong making such that they can reproduce consistent frequencies and tones.

Each gong is handcrafted with the utmost care to elaborate specifications. The Planetary gong series is made to evoke the healing energies of the planetary bodies in our solar system using the musical frequencies calculated originally by Hans Cousto and commonly referred to as the “Music of the Spheres”. Donna Carey and the Acutonics Institute went on to calculate additional planetary frequencies for Sedna, Chiron, and Nibiru and these frequencies are used in the planetary gongs made for us by Paiste. Each of these gongs has unique tonal qualities based on the orbital pattern of the celestial body it is attuned to. The Planet Gongs are integrated into the Acutonics System of Healing & Education, used by individuals, practitioners, spas, and organizations of all types to harmonize, promote balance, enhance creativity, uncover feelings, stimulate growth, and foster internal equilibrium.