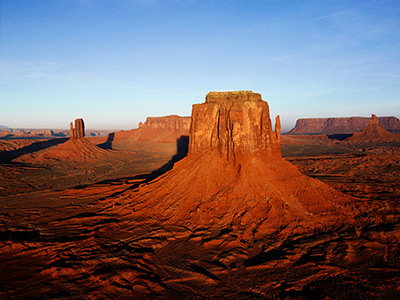 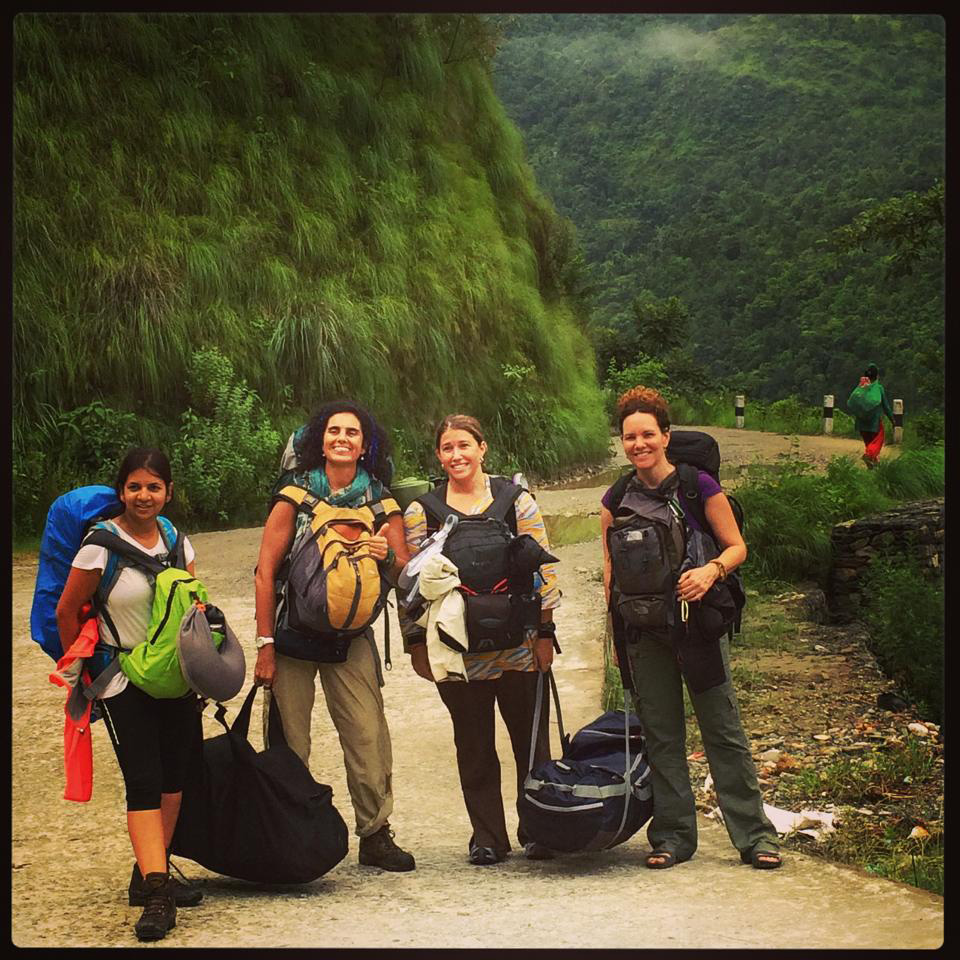 It began in 2012, when Dr. Maria Romera just back from Upper Mustang, Nepal and Dr. Alicia Villamarin, recently back from a mission to Uganda, Africa reconnected at a workshop. These two passionate and accomplished women have committed their lives to making a difference in the world and this encounter was pivotal.  The seeds for what was to become the WU Project a newly formed not-for-profit organization were planted when Alicia and Maria shared their dreams to bring healthcare and hope to underserved rural and urban areas of the world.  Alicia a board certified Acupuncture physian, with a PhD in molecular and cell biology has served as a volunteer and trainer for other not-for-profit acupuncture organizations such as Acupuncturists without Boarders missions in Ecuador (2009) and Nepal (2010) and the Pan African Acupuncture Project (PAAP) in Uganda, Africa (2012). Alicia is compelled to integrate East and West, science and technology, philosophy and spirituality as she seeks opportunities to bridge the gap between East and West and bring forth valuable traditions that are often lost in modern medicine.

Maria an Acupuncture Physician and a Veterinarian holds a belief that medicine needs both the integration of cutting-edge modern knowledge with the wisdom of ancient healing modalities; and that the way to achieve total health and wellbeing is to adjust both to meet the diversity and uniqueness of individuals.  Like Alicia, Maria has always been drawn to explore both scientiﬁc and mystical traditions. She has always questioned the meaning of existence and the relationship between spiritual evolution, health and wellbeing.  Since 2007 Maria has volunteered in Afghanistan, and India, and she has returned to Nepal every year since 2010. Maria describes these trips to Nepal as a purification process where you simply have to let go of resistance and be open to whatever unfolds, particularly as you travel to these remote areas of the world.

Alicia, described this first mission to Upper Mustang, Nepal as the hardest and best trip of her life.  “What can I say about the trip itself? It was the hardest thing I have ever done in my life, physically, emotionally and mentally. It was the best trip I have ever done in my life emotionally and spiritually. Traveling in remote Nepal is always a challenge. Roads that are suddenly roads no more, landslides, mud, drivers that decide they won’t go any further and dump you in the middle of the road, in the middle of the night, no cars for hire, trekking carrying all our gear (with no Sherpa’s) through high mountain passes. We experienced altitude sickness, and we travelled along impossibly rough and narrow 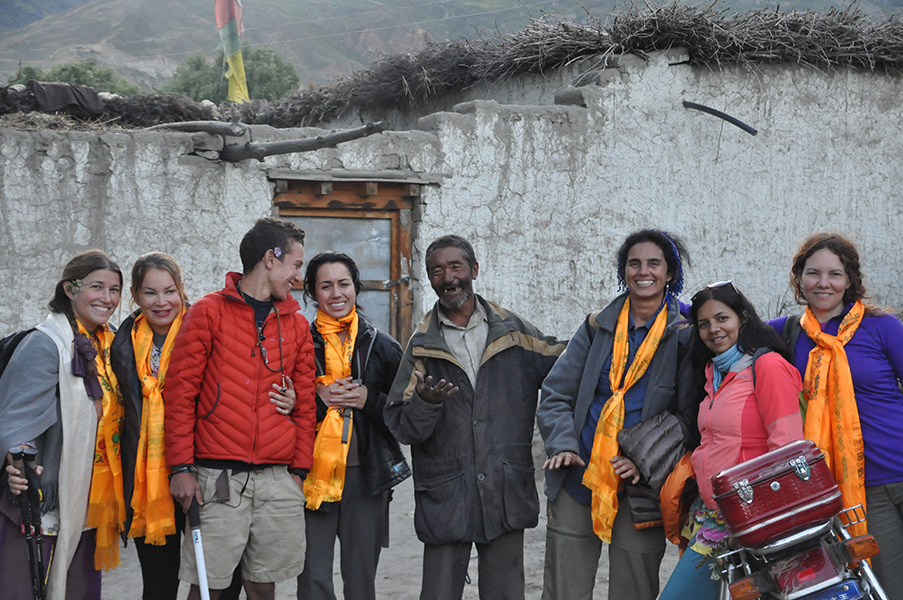 roads on the side of deep cliffs. There was endless waiting, changing plans, arguing and negotiating for transportation.”

It took days of travel to reach their destination the Lo-Garphuk Kagyue Ning Samten Choeling Monastery in Chhosher, Upper Mustang. They monastic school were there hosts, providing beds and meals and a big canvas tent to use as a clinic.  Word spread quickly of their arrival and even before they set down their gear or unpacked the supplies they had carried with them, such as acupuncture needles, cups, moxibustion, and tuning forks, patients started to knock on the door of their dorm room.  It was too dark and cold to treat in the tent, so the first treatments were offered in their dorm room beds.

This first mission included six participants. Three healthcare practitioners, Alicia, Maria, and Carmenmaria Romero, a physical therapist. Three volunteers Laura Newman (Alicia’s daughter) and Fernanda Cohn a Brazilian journalist and her 16- year old son Luis Fernando Pelaez assisted at the clinic. They kept records, assisted in treatments, collected data, and documented all the activities with photos, videos and social media posts. Following a barefoot acupuncture model their first mission trained 17 medical personnel and treated over 120 adults and 15 children. The training and curriculum were designed to meet the needs of the area and included basic Chinese medical theory and sound healing techniques that incorporated Acutonics. This first mission was a huge success, and a great learning opportunity for all participants. Despite the numerous challenges that they faced, there were no complaints, no whining, only big smiles, laughter, and determination to keep going and accomplish what they set out to do with joy in their hearts. 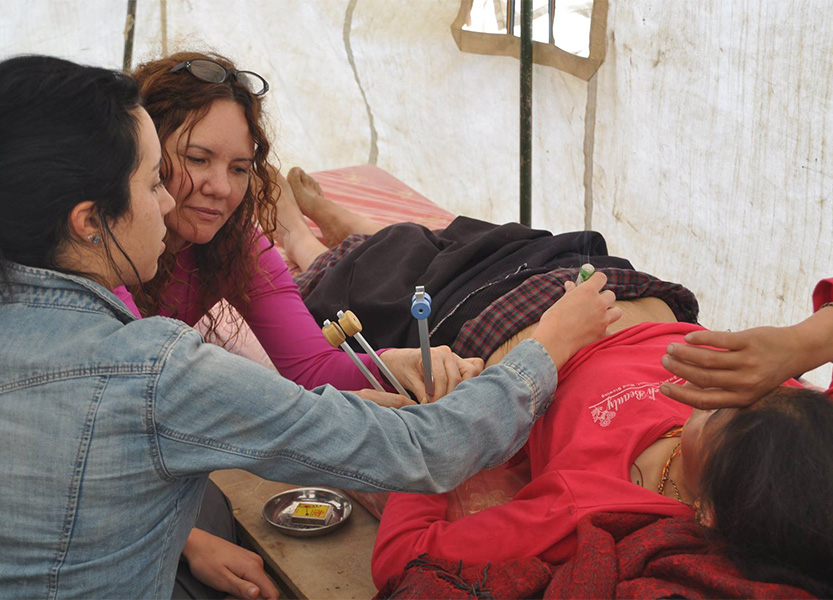 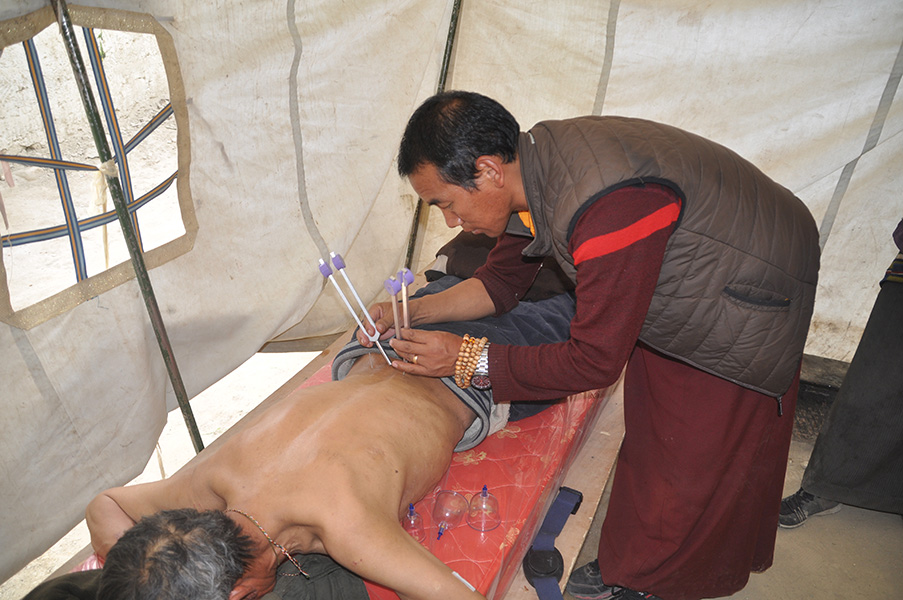 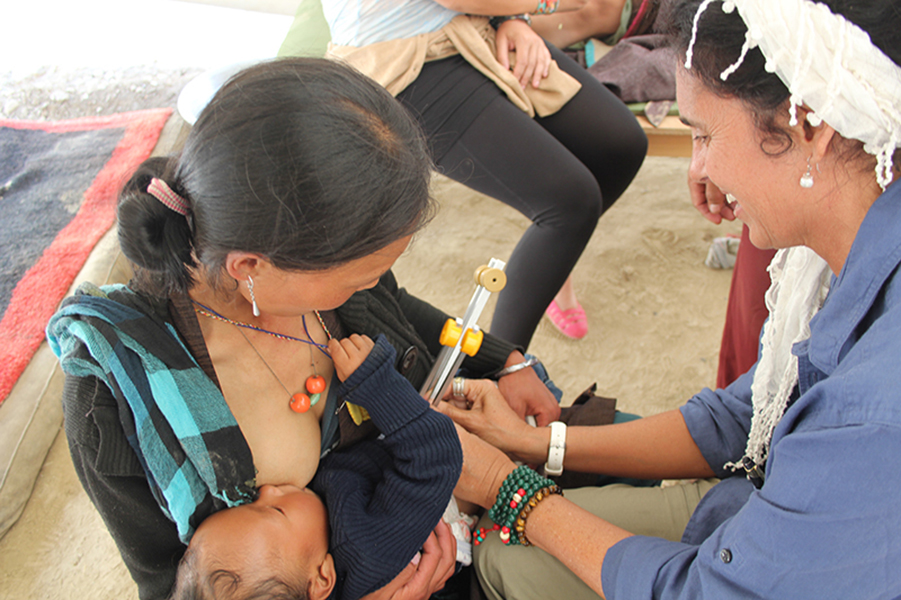 From the moment the trainees arrived tuning forks were placed in their hands and practice began. They worked on patients with no preconceived ideas and as they got the feeling of the forks they marveled at the sound. Treatments went on all day for all types of complaints, using a Tibetan English teacher as a translator the entire village would get involved in describing symptoms and participate in the conversation. Acutonics tuning forks were often used in conjunction with acupuncture, moxa, cupping and massage.

Children were treated exclusively with the tuning forks treating a range of pediatric complaints such as colds, restlessness, insomnia and bellyaches. Carmenmaria had great success treating an adult with severe back pain with just the Ohm tuning forks. The monks were taught theory after seeing the clinic in action, and a solid foundation was left behind in friendships, knowledge and tools. 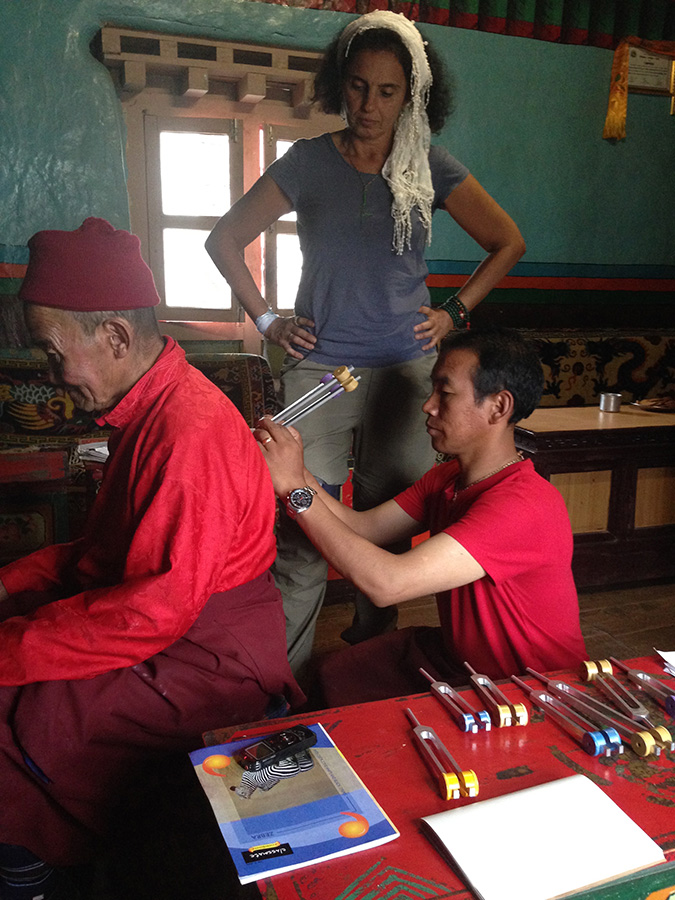 Alicia and Maria have a clear vision for the Wu Project to grow into a heart centered organization with the resources to go wherever needed. They are off to a great start. If you want to learn more about future plans or would like to support their work visit their website or Facebook page.