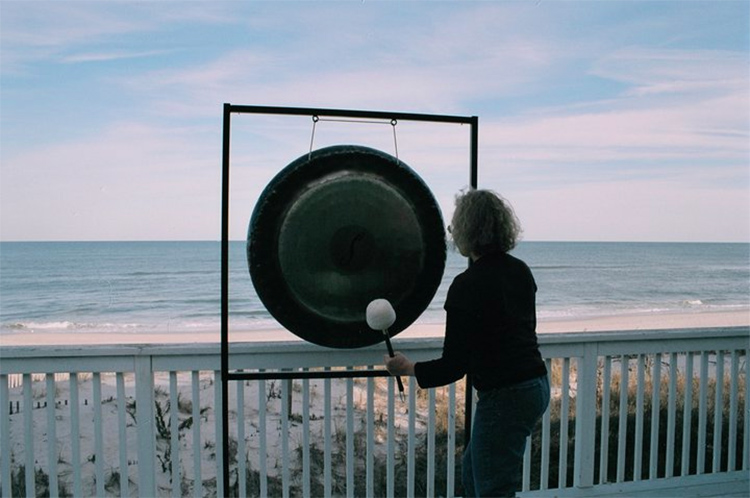 “I’m a mystic born into a scientific environment,” says Maren Good, who indeed grew up in an area that uniquely blended the mundane (the natural beauty of Richland, Washington), the ulramundane (her own inner world, which gravitated toward the planets and the unexplained), and the übermundane—1950s America.

Born in 1951 and raised at the juncture of the Yakima, Snake and Columbia rivers, Maren came of age in a town that had been created by the federal government in the 1940s (as part of the Manhattan Project). Her father, a physicist, had worked on the Manhattan Project at the nearby Hanford Site, the now-decommissioned nuclear production complex, and her mom was the typical 50s housewife (though she later became an artist and a teacher). “It was a very bizarre upbringing in a very artificial town,” says Maren. “It was a cultivated place, but my mom and most of the other women there gave up a lot of incredible talent at the cost of their own identity.”

She had two older brothers (both retired, one an immunogeneticist and the other a teacher), and when she wasn’t spending time outdoors or on horseback, she’d be with her family at their cabin near Mount Rainier. “We were very anchored in the natural world,” says Maren. “And my father was actually very creative. He could pick up any musical instrument and play it immediately.”

After going off to the University of Washington for college, where she was studying art and design, she worked in Richland at the Hanford Projects over the summers—which was when the FBI investigated her in order for her to get a security clearance. “It was a little surreal growing up there,” she admits.

Disillusioned with college, Maren joined the ranks of the growing counterculture. She got involved with an intentional community, a spiritual community, she got into energy medicine. And at times, she also worked in the organizational world, in communications, and in the corporate world, completing her BA in Organizational Communication. “But I continued to till the ground,” she says, “in things that were more satisfying.”

Things like massage therapy, reflexology, archetypal cosmology, aromatherapy. And then a friend told her about a massage therapist who was working with tuning forks. That’s when she realized, this sound healing thing, these are the tools that will bring into my world what is most meaningful and transcendent. It was the missing piece that brought all she studied and practiced together. “Back then, everybody was like, Sound what?” says Maren. That was late 2002.

She discovered Acutonics in early 2003. Shortly afterward, Kat Lyons taught her first Acutonics Level I class in NYC. And Maren was hooked.

“I would go anywhere they would have me,” says Maren. “I would talk about it, give demonstrations.”

By then, she was living back East. Having gone out there after meeting Michael Ungar, a musician and owner of a recording studio in New York City who would become her husband—and partner in sound. “I fell in love,” she says happily. “At the time I didn’t realize the entelechy. How your destiny draws you. And the key part of the work I’m called to do, it would unfold with my partner and in this part of the world. We found a way to collaborate and manifest on all levels. Michael is a tremendous partner and advocate. And what we’ve explored and discovered together in playing the gongs is nothing short of profound.” 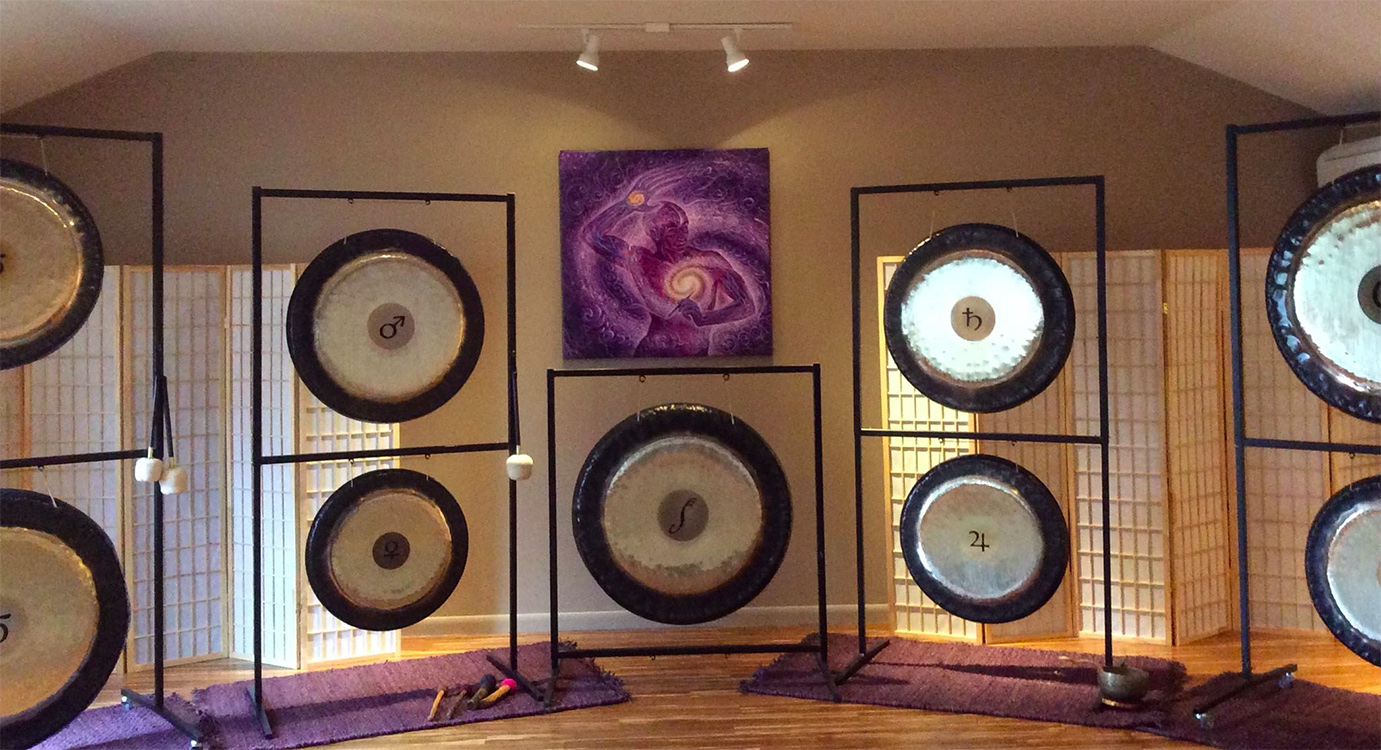 In 2001, she incorporated her company Good Scents, which specializes in aromatherapy products, in Scotch Plains, New Jersey (it can be found at scentandsoundworks.com). She even has her own small distillation set-up, distilling plants and herbs that she grows. “It is satisfying to that alchemical part of my nature.”

And in 2005, while taking the Level III and IV Acutonics classes, she discovered gongs. “I was so profoundly transformed by the gongs,” says Maren. “Gongs are encoded information through their archetypal presence.”

Now an integral part of who and what she does, her work with the Paiste Planetary Gongs is her community offering. She and Michael have the full complement of planetary gongs and for the past 10 years, they’ve been hosting regular gong meditations (on each solstice and equinox and now on all the cross-quarter dates as well).

She and Michael developed their “gong chops” while working with visionary artist Alex Grey and his partner Allyson during their New Moon ceremonies. They’d take their gongs to the Greys’ Art Gallery, CoSM (Chapel of Sacred Mirrors), in New York City, during his guided meditations. It was when the Greys closed the gallery to relocate upstate to Wappinger Falls that they created a CD recorded in the main gallery of CoSM. “Alex’s paintings activated the gongs,” says Maren, “and Alex said our gongs did the same thing for his paintings.”

Maren has been teaching Acutonics since 2005 and teaches the complete course curriculum. The teaching of this work is the best way to touch so many people and share the wisdom and knowledge that is the Acutonics program. “I am always deeply honored and touched by every person who comes to study with me,” says Maren. “I always receive a gift from what is created in our class time together. Often, students become dear friends as well as becoming a part of the growing community.”

She taught Acutonics at the Therapeutic Massage Training Center in Westfield, New Jersey, the Swedish Institute in New York City, and The Graduate Institute in Bethany, Connecticut, from which she got her master’s about four years ago. (Rupert Sheldrake was a guest lecturer, but a freak snowstorm hit and his talk was cancelled. However, when Maren, a lifelong fan of Sheldrake’s, found out he was staying at the same hotel, she and a few fellow students invited him to dinner. “We walked to the restaurant together through a wild Nor’ Easter and spent several hours with him,” she recalls. “And when I told him about Acutonics, his reply was, “What I do believe is the sun has consciousness. And we said, OK. We’ll high five that.”)

Blessed to have a dedicated space on her property, Maren is now able to do all of her teaching, host gong meditations and see private clients on site. For her sound work, Maren uses tuning forks, gongs and singing bowls, as well as essential oils. “I apply oils to acupuncture points,” she explains. “They’re a big part of my work.” She studied with both Jeffrey Yuen and Peter Holmes in Chinese Medical Aromatherapy and Aroma AcuPoint Therapy, respectively.

And archetypal astrology. “I’ll look at a person’s natal chart and ask, How is it manifesting in their life? How can I help them retune their instrument?” says Maren. “All these planets are in deep conversation in our psyche. Part of what I do is figuring out what’s out of tune, how that interior conversation is playing out in their external life, and craft a session to call these elements in and reharmonize them.” As Maren’s professor at TGI wisely said: “Our world is our psyche turned inside out.”

Over the past decade, she’s seen an almost palpable shift in people’s receptivity to Acutonics and its role in integrative medicine. “People are more receptive to it now,” says Maren. “Sound is the medicine of the future. It’s a profound healing modality, and it’s here to stay.” 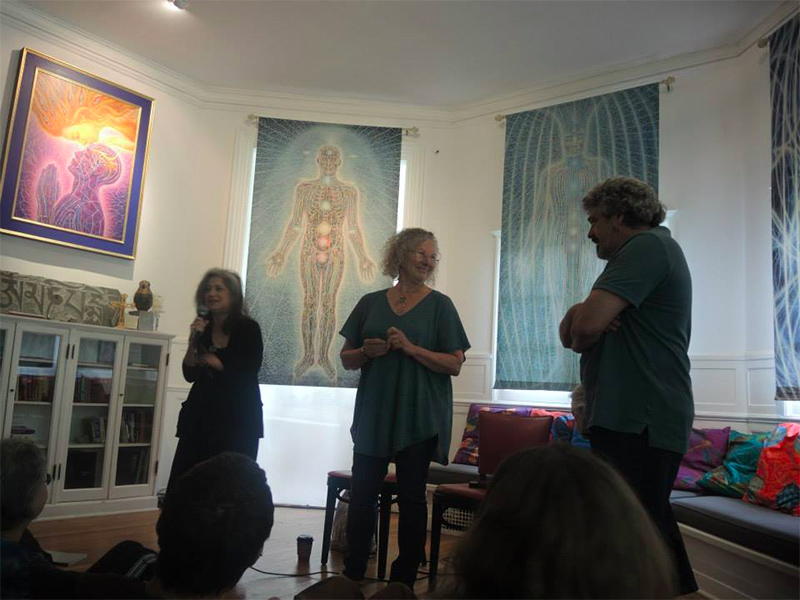 When Maren was teaching aromatherapy and sound to the Integrative Health and Healing Masters Program at TGI, cohorts were often held at the CAM centers at hospitals. She taught in hospital settings in Hartford, Stamford and Milford campuses, as well as the one at Bethany. “Every hospital I taught at,” she laughs, “got ‘gonged.’

“Finally,” she adds, “I’m able to bring my work into one plane.”

It’s not a one-way job, though. Sound, and sound healing, are not at all passive. “It’s learning how to listen, how to pay attention and being willing to do the work,” says Maren, whose intent is not to have someone come for just one session but for four to six (“so we can process together”). “Can we listen to ourselves internally and externally? I think with Acutonics we can. Acutonics brings people back to their own ground of being. It’s about re-membering as well as remembering.”

"I could find nothing to relieve my chronic back pain until I received Acutonics. The sessions give me immediate relief and are long lasting. Recently my Acutonics practitioner began addressing my circulation problem and I am experiencing great improvements. My hands were cold all the time and now are rarely cold. My high blood pressure also went down significantly from this work. The Acutonics sessions for stress relief and grounding are incredibly beneficial. I feel Acutonics can help with a great ma"