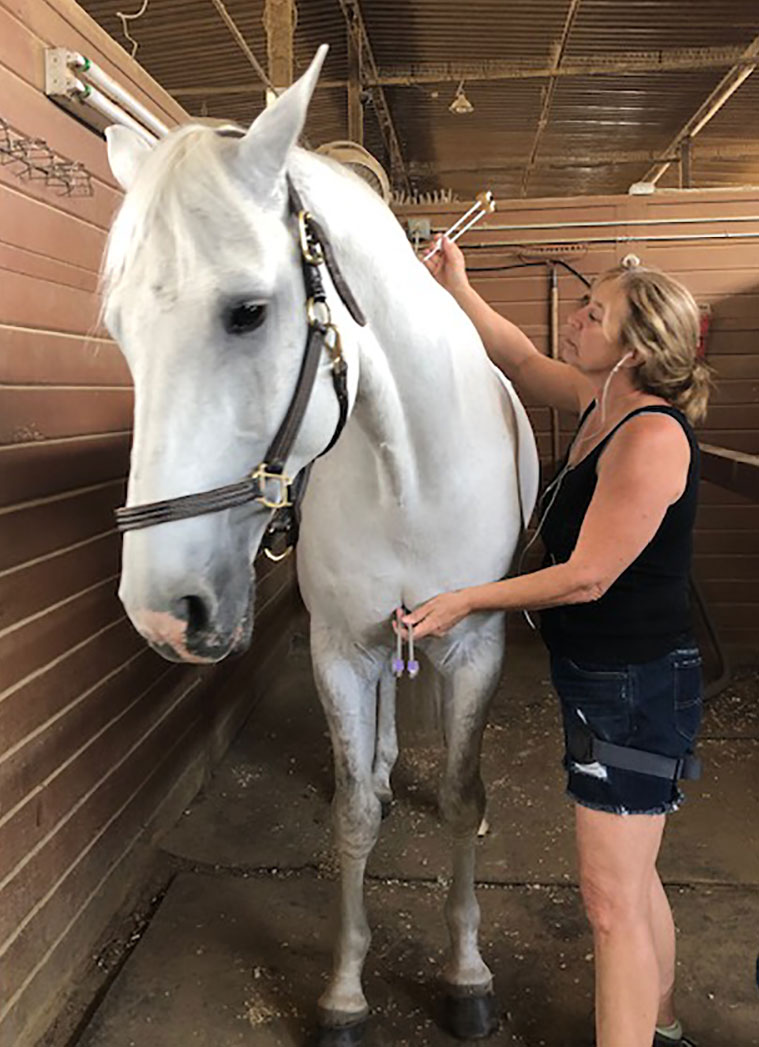 A native of Canada, Patty now makes her home in Taos, New Mexico (just north of the Mothership). It was through her studies at California’s Hellerwork Structural Integration School that she ended up in the States and, in a roundabout way, after studying with Donna and Ellen, found her true calling: using Acutonics as a way to treat the equine species. Patty has been working with horses, and creating better relationships between horses and their riders, for over 15 years. As an Acutonics practitioner Patty combines her work with the tuning forks with her background as a Hellerwork practitioner to help horses heal and find their energetic space—one that gives them better balance, endurance and strength for their spiritual and physical work with humans and the planet. Patty was born in Vancouver, British Columbia and lived in Ladner, until she was 9.

Getting Her Sea Legs:

My parents built a 46’ Trimaran sailboat in the backyard. It took them six years—as it was their weekend project. When it was finished, they launched it into the Fraser River and promptly sold the house and moved us aboard. There were six kids in my family, but by the time they moved everyone onto the boat, there were only four of us left, so there was a total of six people and a cat on board. I spent the first year pretty much feeling seasick the whole time and then my body acclimated to the constant movement. We spent a lot of time sailing around Vancouver Island, we went up to the Queen Charlotte Islands at some point. I spent a total of seven years aboard, the last two of those years we lived in a logging camp at the head of Loughborough Inlet where the only way to get there was by boat or float plane, total population 15 loggers, one cook and a secretary.

My father was a logging truck driver, which is why we lived in the logging camp. For schooling we did correspondence. By the time I turned 16, I had had enough of the “logging camp” life and left home on a charter plane. I hitchhiked back to Ladner and learned to survive on my own, which included several years of commercial fishing.

Getting Hellerwork on my body literally saved my life and I wanted to bring that kind of power to people, especially women. This prompted me to study Hellerwork Structural Integration a form of bodywork, that is a spinoff of Rolfing. I met my-ex-husband at school. He was from the US, which is how I ended up moving from Canada to the states. I have been in the states now for 25 years.

My ex and I were working as full-time bodywork practitioner in Olympia, Washington when we first heard about Acutonics. In 2002, we went to New Mexico to train with Donna and Ellen. We did all the levels with them. After about the third level, they sent an email asking if we did bodywork on horses because there was a race horse near Seattle and they wanted someone to do Acutonics.  At that time, I wasn’t working on horses, but I really liked the idea and thought it would be fun. I had heard that a Hellerworker in Vancouver, Washington worked on horses and called him. By the end of the following week, I was mentoring with him. He helped me learn to do structural integration on horses. Honestly, there wasn’t a lot of difference between doing the work on people and horses, it came pretty natural to me. 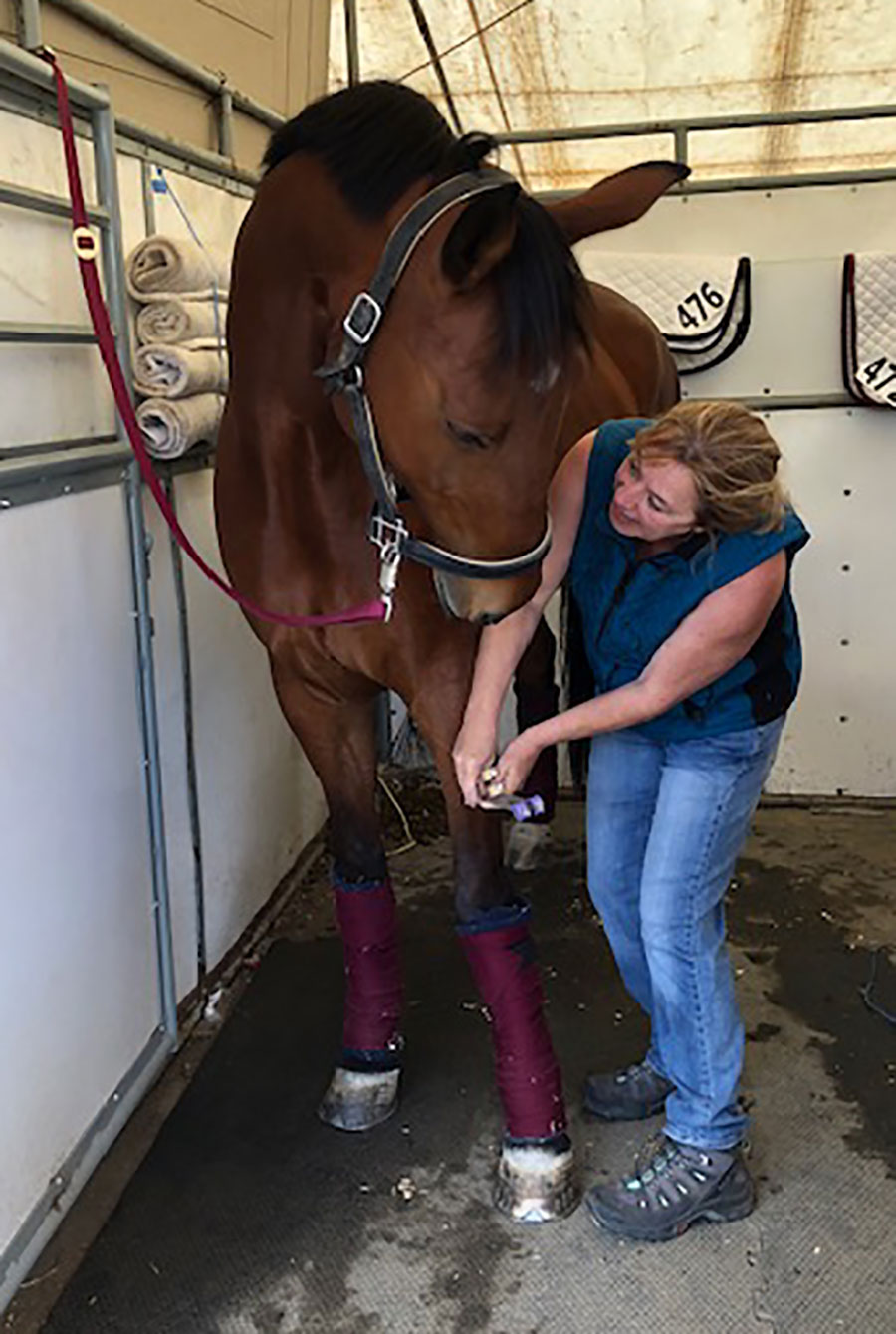 At about the end of my equine training in bodywork, I started to integrate the tuning forks into my work with the horses. This was almost twenty years ago and there really wasn’t anyone doing it at that time. Although, Ellen was very interested in working with horses and used the tuning forks on her own horse, at that time she didn’t have the time to build a practice with horses. I had found a race barn that had a horse with Rhino’s disease, which is very serious. Most horses end up getting put down when they have it to the level that this one did, and that’s what was being considered. I asked if I could try to help him, although I really didn’t know a lot at that time about putting the forks on horses. I also hadn’t done a lot of bodywork on horses either, so I was relying on my instincts as well as what I had learned from using tuning forks in my people practice, which I basically transferred to my work with this horse

The Power of Ting Points:

When I went into the stall, he was pretty messed up. He couldn’t stand still and was extremely fidgety. The owner said that was the breed. He had no control over his bladder, he would just spray everywhere. He also had very bad hives all over his body and couldn’t walk at that point, either. When I palpated him, he was extremely sore and sensitive throughout his body. His bladder meridian was so sore, you couldn’t touch it at all, nor could it tolerate any forks. So, I thought I would work distally with the forks on his ting points. The ting points are all around the coronet band on the feet. The beginning and endings of the 12 major meridians. I didn’t know it then, but subsequently learned that they are extremely powerful points on horses for tuning forks or acupuncture. In that first session that was all I did: 30 to 40 minutes of tuning forks on his ting points.

The moment I put the forks on him he went completely and totally still. The owner was watching and said she had never seen him so still. He stayed like that the whole session. I came back the following week to see him again. The horse’s owner said the day after the first session, he had control of his bladder for the first time in a long time. During the second session I was able to place the tuning forks on his bladder meridian, working with Low Zodiac to disperse his energy. I worked on him for four consecutive weeks with tuning forks only. By the end of the four weeks, his bladder worked properly, his hives were gone, and he was able to walk on the walker. The vet did a blood test and the virus was totally gone from his body. That is just one example of the power of Acutonics on horses.

His fourth session was the last time I saw him because I broke my wrist and couldn’t work for a year. That was how I ended up in New Mexico. I started going there and house sitting for Donna and Ellen, and that led to buying some property there and moving. By the time I moved to New Mexico, I was back working on people again and trying to get some equine business together.

I did a stint at an equine jumper grand prix show in Santa Fe, where I met some riders from California. They all really liked the work I did on them and their horses and invited me to go to California to the horse shows. They offered to help me get set up with the riders and trainers. These horses are all professional hunter jumpers. I adopted a theme that Ellen had created for the Equine work, “Balancing Horse and Rider.” At that time everyone got bodywork and then tuning forks, and I worked with both the rider and the horse.

I took advantage of the offer that had been made to me and drove to California where I met new clients and friends at a horse show. I was so busy with people and horses ( I was doing 9 to 12 bodies a day) and couldn’t keep up with all the work. The horses performed way better, and word got around the horse show. Sixteen years later I am still there. I stopped working on the riders about eight years ago and focus strictly on the horses, unless someone is in a bad way and then I will help them out.

The results I get on the horses with bodywork and Acutonics is astounding. If a horse was spooky going into the show ring, I would apply tuning forks to the ting points and the next day they would go into the ring calmly. I have pulled more horses than I can remember out of colic with the tuning forks. More often than not, by the time the vet showed up, the colic was gone. Some of the horses can get quite depressed, most of them come from Europe and sometimes landing here is very hard on them emotionally. Always, the tuning forks combined with energy work pulls them back. Over the last 16 years, I have developed great protocols with Acutonics for horses. To this day, when I do a session on a horse, they always get their Acutonics session at the end of their bodywork. They love it. They go so deep and quite they often will fall asleep while I work with them.

I find Acutonics to be very subtle, yet very deeply profound. When I was going through all the Acutonics training, I had some pretty profound things happen to me in the training. One in particular was about halfway through the training I woke up in the middle of the night and my whole body was vibrating intensely. I fell back asleep and when I woke up in the morning, I could still feel everything inside my body vibrating. To this day, I can lay down and when I tune into my body, I can feel the vibration. It’s an awesome feeling. My equine clients love the tuning forks. Sixteen years working on them and I still am amazed at the effect it has on them.

From Ordinary To Extraordinary:

I really can’t imagine doing a session that doesn’t incorporate the Acutonics forks. For me, it takes an ordinary bodywork session and makes it extraordinary. It brings depth and stillness to the core. I have tried a lot of different things and have watched other practitioners try a lot of different things on the horses and nothing touches them as deeply as Acutonics does.

"When I was diagnosed with breast cancer, my world went into a crazy spin. I was suddenly thrust into a foreign land of doctors, drugs, and medical treatments. Elle a recent breast cancer survivor herself, offered to help me with Acutonics sound healing treatments. Not knowing what to expect, I dragged myself in after my first round of chemotherapy. Elle went to work treating parts of my internal body like my liver to not only help with the side effects of the drugs, but to balance and ground me as well."