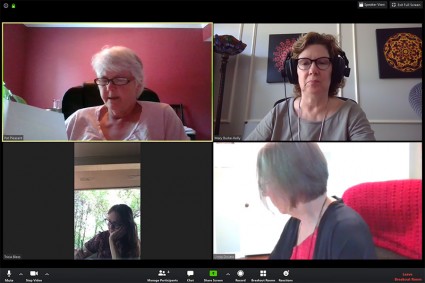 I am an Aquarian, so I embrace new and progressive, but let’s face it, Aquarius for all its eccentric glory, is a fixed sign and set in its ways. Not to mention my grand fixed cross makes sudden change a bit of a challenge. So when it became obvious (transiting Uranus is conjunct a corner of that cross now) that my Acutonics classes and practice could not be performed in person with real live bodies in the COVID 19 Pandemic, I grudgingly accepted my new path to online classes, Zoom live distance sessions……and I created a Youtube channel.

I started out with no new technology. Just my laptop and a late night mission to share what seemed needed at the time: a video on some tips for sending Acutonics long distance (something we don’t usually teach in our regular classes) for students and a second video on a protocol for the intense fear and anxiety so many were suffering. Some of you have emailed with questions on what sound and video editing I used just the camera/mic in the laptop and the editing that comes with Windows 10. I took baby steps on this path, can’t you tell?

I discovered that nighttime is yin, creative, the primordial feminine darkness time. The best ideas coming between 3:00 AM – 5:00 AM because I was starting something new like breathing in the Lung Qi that was peaking in the biological clock. The Zoom hosting guide made and shared with Acutonics faculty by Janet DeVallauris, my fellow teacher, was like following those numbers in a Miko Sankey esoteric acupuncture pattern. I couldn’t go wrong. Then came the real time practice with my husband in another room on Zoom to see my view and the student’s view. “What do you see now? Can you hear that? What is on your screen now?” Daughters were Zoomed to practice how to manage break out rooms, share whiteboards, and phone cameras. All hard documents were organized in separate emails to minimize student confusion. Zoom invitations were explicit so there would be no confusion how to join a meeting. The Blue Yeti microphone arrived, and settings were picked. Various rooms were tried out for the best lighting. The ring light was on Amazon delay.

The universe was kind. My scheduled class was Acutonics VI: Clinical Documentaries, which does not cover point location or techniques. My six students had taken six previous classes with me and all knew each other, they were a kind and gentle audience. But I made sure I had options for meditation, openings and Taoist breathing exercises for breaks if we got tired.  Input from faculty meetings and my experience as a student in Paul and Jude Ponton’s Zoom Points & Meridians and Fundamentals of Chinese Medicine was my prep.

The big day arrived, and it was like welcoming students’ home again. We could see each other, laugh and connect. Some students were Zoom proficient; others were novices. Although one student could not connect (because she had not joined Zoom previous to class) at 9:00 AM, a generous student called her on the break to give the student her husband’s Zoom code, and she was in. Zoom break out rooms became the treatment tables during practicum. Sometimes 3 to a room and sometimes 2 to a room, developing their case assessments and plans in private with me “entering the room” to answer questions. I felt that the students were more focused on the tasks. Being alone at their computer and discussing the case with one or two others, there did not seem to be as many distractions or small talk. They all felt they knew more than they thought by doing the case studies. I switched from one Zoom break out room to another and the whirling screen graphic confirming my transition temporarily cut off sound and video with the students until I entered the next room. Although alarmed at first, it began to feel like I was walking down the hall here to the next treatment table to check on them in person.

I have to admit that no one used the chat function during class. It was open but no one engaged. Maybe because I told the students I probably wouldn’t notice any chats so just “unmute yourself and talk, if you have a question or comment.” The small class size allowed us to have that familiarity like being in a room together again.

The last practicum in Clinical Docs is a role play on intake and development into a session plan. That session is then given to the partner. Online class offered an opportunity for students to learn how to send the session long distance. They had a choice to send long distance at the end of class or Zoom/Facetime/ their partner and send it on another day. Most opted for the later, so I carried them all into the gong room for a gong closing.

I audio recorded the classes and students can listen to them on the Zoom cloud for 90 days with a student code. Then Zoom deletes them.

Feedback from the students with their first online class was positive. One said it gave her the motivation to start having meetings with all her employees via Zoom, something she had not considered.  Another received her long distance session from her partner and texted me that she felt great all day….it was very powerful long distance.

What Is My Opinion About Online Class?

It definitely has advantages. Let’s face it, you can sleep longer and just be ready at the computer. You don’t have to travel to or from class or out to lunch. That means out of town students save on lodging and travel. You only have to dress from the chest up. You don’t have to make or offer snacks for students (my Moon is in Cancer…you get fed here). You can use a background so the environment can be messy. As a student, you can turn off your video and still listen so no sees what you are really doing. (Don’t give me that excuse about saving your broadband signal we know you are really eating or working on something else). With no geographic boundaries, you can also choose to study with a different teacher to gain different perspectives.

Of course, there are disadvantages. You can’t feel the tuning forks on you during practicum. And there is something about being present in the room of a vibrating gong.  The experience is less intense.  Finding points accurately or fork techniques can be a challenge. You have to purchase tools before class and have them shipped to your home instead of “try before you buy.”  Sometimes the internet connection will drop, and you have to get back on when you can. EMF’s and blue light from sitting in front of computers are not healthy and it is important to have something that blocks or mitigates those. We also take longer breaks and lunch. I recommend forks on the Yin and Yang Qiaos after class for eyes and mineral loss.

My next foray into online is for clients: a 20 minute distance session for $30 on fear/anxiety and overwhelm during May 2020. If you offer something like this, it gives your clients who question long distance effectiveness a chance to try it inexpensively and see if it resonates with them while you still get some pay for your time and expertise. If you can build a practice with word of mouth, long distance sessions can be built like that as well. By choosing something so obvious like anxiety, they should be able to gage if long distance works for them.

At the end of May, I am offering a 2 hour “Acutonics at Home” workshop to teach personal care with Acutonics starter sets. I will be working the “creative yin time” to develop methods that translate into finding points and holding forks……how about that plastic reflexology foot I have…?

Here are a few quotes from students who just completed Acutonics Level VI: Clinical Documentaries, the first online class that I taught.

"I loved the breakout rooms. When I developed my plan with my partner and then came back to the main session on ZOOM, it made me realize I knew more than I thought."

"Thanks for going the extra mile to make sure the students are getting what they need during this time."