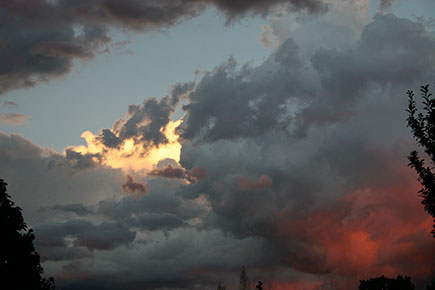 By Andrew Cunningham, is a freelance writer who lives in Falmouth.
Cape Healing Arts - Summer 2007

“Music has charms to soothe the savage breast.” So goes the saying. In reality, it’s the sounds within the music, and it’s these sounds that many holistic health practitioners are using in their treatments of patients. It doesn’t matter what a particular practitioner focuses on – acupuncture, massage therapy, BodyTalk™, craniosacral treatment – more and more, sound is becoming a vital part of the treatment.

One form of sound healing growing in popularity is Acutonics. Using tuning forks calibrated to the mathematical frequencies of the planets in their orbits, the process is completely non-invasive, using acupuncture, acupressure, and other trigger points in the body to work with the energy flow in the body’s meridians and chakras. Acupuncturist Arlene Myers, owner of Acupuncture and Associated Therapies in Mashpee, and a certified Acutonics teacher, says that the exciting part of Acutonics is that it can be studied by anyone. “You don’t have to be a medical practitioner to learn Acutonics,” she explains. Made of space-grade aluminum, Myers says that the tuning forks are used two at a time, sometimes tuned to the same frequency and sometimes octaves apart. She finds the treatments an excellent alternative or complement to acupuncture. “You don’t have to use needles to get the benefits of Chinese Medicine principles you find in acupuncture.”

It’s all about balance, says Myers, who conducts Acutonics workshops for the general public and other health professionals. “If the body is in balance, it will allow the problem to work itself out. Bodies reflect everything that is going on with us.” Acutonics and other sound healing therapies help to bring the bodies back into balance. “When the body suffers a trauma of some sort, that energy stays with us. The sound from the tuning forks gets it moving,” she explains. Sound healing is based on the idea that problems affect us on many levels. Usually if there is a physical ailment; it affects the emotional body as well.

“Our body reflects all kinds of levels of thing that are going on,” says Myers. “What I like is that you don’t actually have to do psychotherapy; you don’t have to verbalize the issue. What we work on with sound is the cellular, or energetic process that someone is experiencing.”

Using different forks leads to different results. Knowing which forks to use, based on the energies of the planets, is what Myers considers the creative part of the process, “Everyone uses them differently, too,” she says. “For example, I will often combine a half hour of Acutonics with a half hour of acupuncture. Some practitioners do Acutonics for a full hour.” And as with most alternative healing, the treatment goals will dictate how many sessions will be needed.

Of course, healing with sound is nothing new. The ancient Greeks understood the power of music to heal the body and soul; in fact, practically every civilization has used sound as a healing property. In the 1960s, Swiss scientist Hans Jenny concluded, after ten years of testing, that sound creates form, and that the human body has its own particular sound made up of the sounds of its cells and organs. For examples, it has been determined that slow music can slow down the heart rate, creating a sense of peace in the person listening. All of our atoms, molecules, and cells operate on a vibrational frequency. A harmonious sound, especially one focused with intent, will resonate throughout the body and bring the body’s vibrations into alignment with the sound.

Alica Gardner runs an Energy Medicine and Body Work practice out of DeVeuve Chiropractic and Natural Medicine in Orleans, “I use sound healing in almost every treatment I do, “ she says. “From the music I choose in the treatment room, to actually putting sound into the body.” She uses the Acutonics tuning forks, but also chimes, crystal bowls, bells, rattles, and drums. “I love the Acutonics system because it incorporates the wisdom of ancient Chinese Medicine, astrology, and the magic of sound.”

Gardner uses the BodyTalk™ system in her practice, which involves muscle testing to help the practitioner determine what forms of energy medicine to use on a patient. When she adds sound therapy, she is “astonished” by the results. “The tuning forks are especially good for getting stubborn ‘stuck’ pain and discomfort to move on and out. Clients find the treatment (being so non-invasive) very relaxing and restorative. They often seem to ‘float’ out of the treatment room after a session.”

Debra Avery, of Sandwich, is a craniosacral therapist and a Reiki master teacher who works out of the Acupuncture and Associated Therapies office in Mashpee. She used to incorporate sound as part of her treatments, but has found the sound therapy becoming the centerpiece. “I now include the other things around the sounds,” she says, “Sound opens the energy body, allowing me to use my hands more effectively,” Avery feels that sound healing, in all its forms, is finally gaining acceptance. “I think its time has come,” she says, “It is the medicine of the future.”

In addition to the tuning forks, part of the Acutonics system includes symphonic gongs, made in Germany which like the forks, are tuned to precise planetary frequencies. The gongs are designed to bring listerners back into connection with their physical, emotional and spiritual worlds. The powerful resonance of the gongs makes them perfect for use with families or large groups. Myers hold regular gong meditations throughout the year in her office.

Sound healing is not limited to tuning forks. Like Gardner, many health practitioners use chimes, bells, cymbals, rattles, and drums, as well as “singing bowls.” Singing bowls are ancient instruments thought of as a “standing bell.” Unlike most bells that are inverted and hang or are attached to a handle, singing bowls sit upright. The rim and sides of the bowl vibrate to create sounds.

Johanne Kieffer, a licensed massage therapist and a Reiki Master at Wellspring Massage, in Eastham, feels that the healing powers of sound make her other treatments more effective. “It places the body in a more relaxed state in preparation for the massage,” she explains. “Clients have provided positive feedback, reporting a sense of overall feel the vibration traveling up their legs and sometimes through to their fingertips,” Kieffer has experienced the power of sound healing in her own life, using it to calm some autistic behaviors in her son.

Alternative medicine has experienced a rebirth in our fast-paced society. It makes sense that one of the most ancient of all the healing techniques – sounds – should reemerge as an essential part of the treatment process. As we begin to understand the properties of sound, we can truly understand just why music can “soothe the savage breast.”