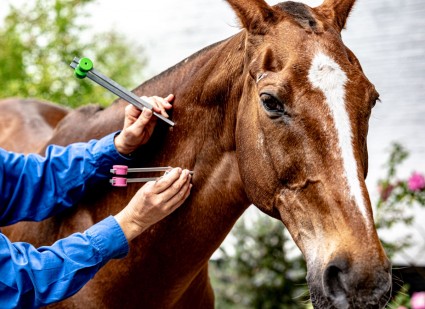 When we moved Acutonics from Seattle, WA to rural Northern New Mexico, I fulfilled a dream, to have horses in my life, once again. Shortly after my beautiful Kentucky Mountain Saddle Horse, Jody Hard to Copy, arrived here in New Mexico, she suffered a traumatic injury. Over the ten years that I was blessed to have this incredible horse in my life she became my teacher and motivation to use Acutonics on horses. Jody and I had great success together. In 2007, wanting to share this knowledge, I collaborated with Acutonics faculty member, Kelly Haggerty to develop and launch the very first Equine Acutonics class, at Solid Ground Farm in St. Leonard, MD. Since that time Kelly taught several classes, Patty Warren developed and taught a program that integrated Acutonics tuning forks with bodywork for horses, and several other faculty members began to treat horses and express interest in teaching an equine specific Acutonics course. Although, we were pleased to see people developing programs for horses, Donna and I felt that it was important for the Institute to oversee the Equine Acutonics course, and that a uniform curriculum be developed and taught, as the foundation, that in the future other teachers may train to teach.

Knowing I had far too many commitments to revision this class, prompted me to reach out to Alaina Draper, to see if she would be interested in developing and teaching a new Equine Acutonics Class. Alaina, based near Salisbury in England has completed all the Acutonics training with Joanie Solaini and took the Unwinding Trauma class with me. She also recently completed her training to become a Certified Acutonics® Practitioner and she has also assisted Joanie with her classes. I have been fortunate to have numerous opportunities to observe her work with horses and Acutonics and I have always been impressed. Moving Acutonics online, prompted me to revision how we might offer an equine course to our global Acutonics community. After a year of thoughtful curriculum development, Alaina is ready to launch Foundations in Equine Acutonics online. Donna and I couldn’t be happier with the thoughtful work she’s done to bring this class together, and we hope to see many of you when it is launched on Zoom.

This October Acutonics is making a long overdue re-entry into the equine world with a Foundation in Equine Acutonics elective. This online class will give students the core knowledge they need to start regularly treating their horses. We’ll explore how East Asian medicine approaches equine health and study speciﬁc protocols to assess and restore systemic imbalances.

Whether you want to treat your own horses, ultimately want to study further to treat professionally or are just interested in how Acutonics translates to another species, this course is designed to give you the core building blocks you need to take that forward.

Acutonics is a great way to begin practicing complementary equine therapy. It gets fantastic results and having a practice that allows you to do something with a horse, that is exclusively for their beneﬁt dramatically changes the horse-human dynamic.

This class is open to anyone interested in trying Acutonics on horses who has also completed levels 1 & 2.

This class extends the treatment skills and frequencies taught in Acutonics levels 1 & 2 to working on horses. Rooted in evolutionary harmonic physics and East Asian Medicine, this course focuses on bringing the horse into a state of physical completeness. Enhancing performance and quality of relationship through amplifying to core identity of the individual horse.

Learn equine energetic anatomy and explore speciﬁc, non-invasive treatment protocols for preventative care, helping the body to adapt to constant environmental and internal changes. Extend your relationship to Acutonics Integrative Medicine by experiencing the purity with which horses respond to the frequencies of their planetary and cosmic environment.

This class is Ideal for Acutonics students who are already experimenting on their own horses, or have access to horses to practice on, or even just those interested in learning the theory of equine practice.

This course will take place remotely over 3 weekends with assignments for those who have access to horses to practice on.