Home » News » Come What May: Uranus in Taurus

Come What May: Uranus in Taurus 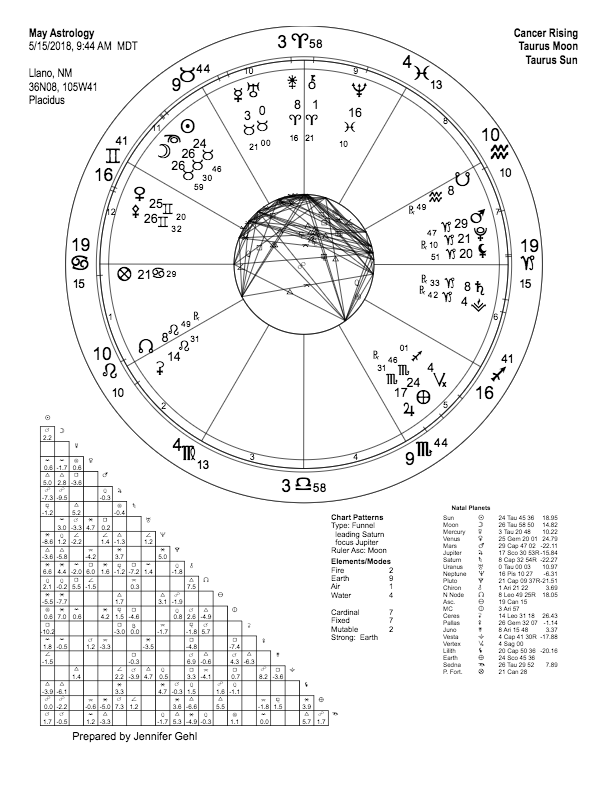 Revolutionizes our Financial and Environmental Values by Jennifer Gehl

The biggest news astrologically for the month of May, and really for the whole of 2018, is Uranus’s move into Taurus on May 15. It’s been 84 years since Uranus occupied the sign Taurus, and 7 years since Uranus shifted signs from Pisces to Aries. While traveling through Aries, Uranus activated the “I need to be free to be me” attitude. As it moves into Taurus, it will activate the “I need to be free financially” attitude. We will feel some dissonance as our acquisitive nature and security needs will be greatly challenged by Uranus’s energy. As Fixed Earth, Taurus loves “sameness”, and is not adept at handling change. Uranus likes to throw curve balls and events we never saw coming.

At the global level, we will see a need to break free of systemic financial constraints and debt. But Taurus governs more than mere finances; it rules resources of all kinds, including self-esteem. The old social narrative that equates self-worth to net-worth will be revolutionized by Uranus’s presence in Taurus. Earth is our “real estate” writ large, so all things related to her resources and the environment will no doubt be affected and ultimately revolutionized. There may first be some shock waves in these areas, perhaps even literal “earthquakes”, but ultimately the upheaval will lead to innovative change and more Earth friendly solutions. We will probably get a sense of what is to unfold over the next 7-8 years of this transit when Mars in Aquarius squares Uranus on May 16. My guess is that Uranus will bring about change that castrates corporate greed and restores power to the masses.

Uranus also rules the eccentric and unfamiliar. This includes inter-dimensional and extra-terrestrial beings. So Uranus in Taurus could bring more visible contact and interaction with those who’ve been assisting with Earth’s evolution from behind the scenes.

How can we prepare psychologically and spiritually for these changes? Being aware of where Uranus sits in your chart, as well as the areas of life affected by the fixed signs Taurus, Scorpio, Leo and Aquarius will provide insight. Right now, we are all experiencing Jupiter in Scorpio, putting a magnifying glass on 8th house issues, not the least of which are the issues of power and sexual abuse unfolding in the media. When Uranus moves into Taurus it will oppose early degree Scorpio, perhaps freeing up any heavy energy experienced from Jupiter in Scorpio. Early degree Leo and Aquarius will experience a square from Uranus, creating some tension asking for change. For those with Sun (and Moon/Ascendant) in Taurus, Uranus will affect self-identity or behavior in some way; Scorpios will be affected in the area of relationships, both business and personal; Leos will experience change in career or public status; and Aquarians can expect change at home or in the emotional root/foundation.

The highest vibration of Uranus’s shake-up is to wake up.  If we’ve been aware that we need to change and haven’t, Uranus’s effects will be felt as jarring.  If we’ve been evolving according to our inner guidance, then these changes should be felt as a breath of fresh air.

For those of us with Sedna in Aries (born before 1968), Uranus has been awakening her energy in our lives while transiting late degree Aries. It is about to do the same for those with natal Sedna in Taurus. Sedna embodies the journey of each Water sign’s initiation from low to high vibration. The Cancer initiation involves departing from her family of origin and codependency to embodying the Mother of all Life in the Inuit Community. Her Scorpio initiation unfolded through emotional betrayal and violent death, only to be reborn as the immortal sea woman and shaman. The Pisces initiation is illustrated by her romantic deception turned nightmare, leaving her literally and emotionally lost at sea. But the highest vibration of Pisces embraces the embodiment and connection of One life to ALL, and in this Sedna triumphs.

Ultimately Sedna’s triple-water shamanic initiations illustrate our own journey, from low to high emotional vibration, for the purpose of ultimately transcending victim/persecutor consciousness that has plagued our planet for eons. As part of Earth’s ascension process, there has been a need for us to feel every conceivable emotion in order to transmute/transform that vibration on this planet. In doing so, we have provided a service to the planet at large. Now we have the opportunity to embrace our immortal, multidimensional being within. Uranus plays an intricate role in this evolutionary process as liberator of all sentient beings who have previously been downtrodden and outcast. The good news relevant to the transit of Uranus in Taurus, disrupting our current financial system and activating Sedna, is that abundance will be provided when human beings practice right relationship with all other sentient life.

For the most effective treatment know where Uranus, Taurus, and fixed signs are in your (or your client’s chart) to support the current cycle of change. Determine the Vessels and blends based upon this knowledge. The following blends are merely suggestions taken from the New Moon and Full Moon charts.  It is recommended that they be compared to the client’s natal chart for further refinement.

May 14: Mercury enters Taurus.  Change begins in the world of finance and commerce
May 15: New Moon conjunct Sedna; Uranus moves into Taurus. A new cycle begins that shakes the foundation of an ancient and incestuous patriarchal stranglehold, ultimately leading to financial liberation of the masses. Inter-dimensional beings (Uranus) make their presence more fully known on our planet (Taurus).

New Moon Blends:
Sun/Sedna
NM/Sedna
Jupiter/Sun (opposition, and preparation for Full Moon in Sagittarius)
Saturn/Sun (exact quincunx from Saturn to NNode in Leo; also prepares for quincunx from Saturn to Sun at Full Moon on May 29
Mars/Venus (quincunx from Cap to Gem)
Pluto/Venus (same quincunx)
Mars/Uranus (square – becomes exact on May 16)
Uranus/Sedna (depending on natal Sedna placement, transiting Uranus is conjunct and activating). Awakens dormant DNA, assisting with the body’s recalibration to higher dimensions.

May 29: Full Moon in Sagittarius; bringing fullness to new and broader philosophy…being able to see the bigger picture of events as they unfold.

Jennifer Gehl, MHS, integrates her Bachelor’s in Music, Master’s in Health Sciences, and extensive background in several energy therapies, to inspire new awareness of ancient medicine. Her book, The Science of Planetary Signatures in Medicine: Restoring the Cosmic Foundations of Healing, with Marc S. Micozzi, MD, outlines the connection between human health and cosmic science. On her radio show, Cosmic Harmony with Jennifer Gehl, she discusses astrological cycles with her guests and introduces harmonic blends to support healing change in their lives. The show airs each Wednesday at 11 AM/11 PM EST, on Dreamvisions 7 Radio Network, a syndicated Boston based radio station and media partner to The Omega Institute.

"The physical issue . . . centered around, an essential tremor in my hand and leg that I have had for about 8 years. In working with Elle for about 6 months and the way she technically AND intuitively uses Acutonics, I am happy to report that over time my hand tremor has lessened quite a bit and my leg, which could sometimes jerk quite substantially during the night, has almost disappeared... [After] every session, I always felt “lighter”, happier, [and calmer]. "