Home » News » Dr. Birch Storey on Acutonics’ and the Spaces in Between 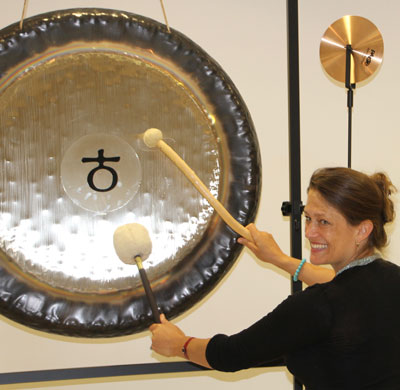 “Sound,” says Dr. Birch Storey, “is to the nervous system as food is to the body.”

Which is about as good an analogy as there is for the basis of Acutonics and sound healing.

“And what makes Acutonics unique among sound therapies,” she adds, “is the cross-cultural and mathematical impact of the interval that is created when two tuning forks are used together.” 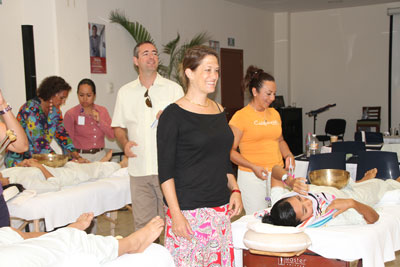 Birch should know. She’s been teaching Acutonics for almost twelve years, and like many an Acutonics teacher, practitioner and client, has had an open mind, a curious mind, all her life. One that has led her to many places, many modalities, before landing on what she feels has been “the greatest medium, method and mentor of my life—Acutonics.”

Born in Canada but raised in Bermuda, Birch had her first “visceral experience of the sonic soup and how transcendent it was,” as she puts it, when listening to the songs of the humpback whales that her mother had recorded (her mom had been the first person to make any such humpback recordings—her mom, “an intrepid soul who used to go diving with Jacques Cousteau,” had also started the nation’s first maritime museum, now the National Museum of Bermuda). “That,” she says of her mother’s tapes, “led me to a lifelong love of vibrational fluency.”

Even earlier, at age four, she’d developed a concurrent passion for the natural world and its secrets while dissecting her first fish. “Ever since then,” she says, “I’ve been fascinated by the inner workings of the universe and how its unseen mysteries are revealed in what we see, hear, smell and taste.”

Three years later, she’d started boarding school. A very structured environment but one that gave her a keen independent streak and a desire to see other cultures (by age 11 she was traveling to Italy for tennis matches). 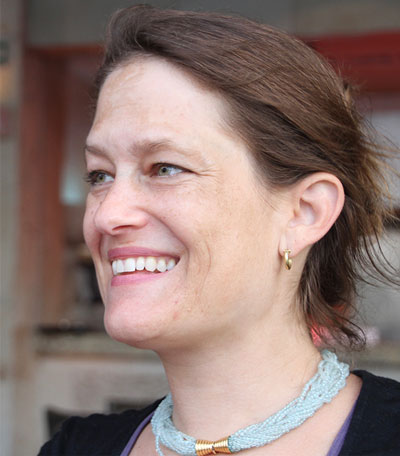 By the time she got to Dartmouth, she was determined to become a doctor—and graduated with a BS in molecular and genetic biology in 1994. But her time there was less of a straight shot through and more of a circuitous journey around the world—literally and figuratively.

Dismayed by the fact that Dartmouth required only five hours of nutrition as part of its pre-med package (and on a larger level, “profoundly disillusioned to learn that the bastion of Western medicine was more focused on disease management than the preservation of health”), she lit out for Australia to work in a rainforest ecology program. “I thought, Maybe I’ll just heal the land instead of the people,” she recalls about her time among the elder women of Queensland’s aboriginal clans.

Her work in ethnobotany, though, only reified her desire to work with people (over plants). So she packed up again—this time to Nepal and Tibet, where she initiated herself into those area’s perennial wisdoms. And then on to Vietnam, where she volunteered at a Hanoi hospital, and learned acupuncture in exchange for English lessons. She was all of 19.

Then she went back to Dartmouth.

After graduating, she apprenticed with a kung fu and qi gong master—who after teaching her what he knew about Taoism and Chinese medicine, encouraged her to venture further into acupuncture and Oriental medicine. “That,” says Birch, “laid the foundation for why Acutonics resonated with me.” 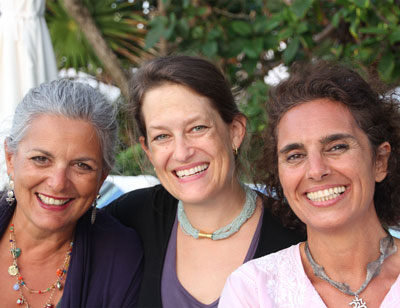 Going further into acupuncture meant venturing west to Santa Fe. To the Southwest Acupuncture College, from which she graduated in 2000 with a degree in Oriental medicine and right afterward created and directed the Center for Holistic Therapies at the Life Healing Institute, a rehab facility just outside of town.

It was while she was there, trying to treat people, many of whom had PTSD, that she “came to realize the limitations of acupuncture needles,” she says. “For those who had already experienced the trauma of transgression I found it anathema to penetrate their boundaries once again.”

How, then, could she adequately treat people without violating their personal space—their very skin?

In order to do so, she branched out. She studied energy fields, light healing and chakras with Barbara Brennan at her School of Energy Medicine. (She also got her master’s in classics from St. John’s College.) And then she had her Eureka! moment: she came across something in Oriental Medicine Journal. Something about a class in sound healing at a place called the Kairos Institute (which today is known as the Acutonics Institute of Integrative Medicine). 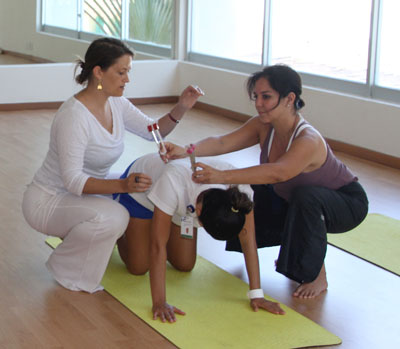 She’d discovered Acutonics. She’d found her modality. And then almost as soon as Acutonics came into her life, she was told she had cancer. Which led her even further into the world of alternative healing—and to England, Germany and Malaysia. In hindsight, though, the cancer taught her many valuable lessons; about herself and about the power of sound and sound healing and frequencies and harmonics.

In essence, she saw her cancer partly as the result of an imbalance—too much of a good thing. The more “vibrationally fluent” she became the more she leaned on it to “ratchet the pitch up when feeling sluggish or cool down heat and irritation when irked.” She’d been raising her vibration without systemically harmonizing her entire bio-field first. Over time, “I blew a fuse,” she recalls. “This forced me to mature my embodied understanding of the nature of nature and return home to what makes Acutonics so powerful: intervals.”

In time, the cancer went into remission. And Birch has forged ahead. Stronger than ever. As curious as ever. As determined to share her knowledge of sound healing and Acutonics with others. She’s been a senior faculty member ever since.

And as Birch sees it, “It is the interval, the space in between, that holds the magic.

“The backbone of all this healing”—her healing, the healing of others—“was the ability of Acutonics to shift the nervous system out of sympathetic fight or flight into the rejuvenating and repairing parasympathetic dominance,” adds Birch. “Acutonics works at the level of epigenetics, for instead of focusing on individual frequencies, it works with harmonies. Harmonic intervals between two tuning forks entrains the nervous system and all the resonant frequencies into harmony with itself.” 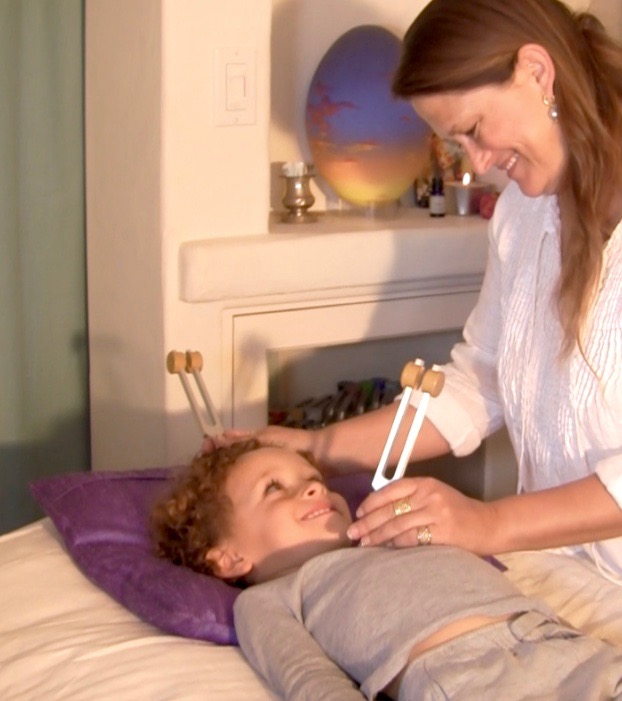 Now firmly ensconced (and newly married) in Santa Monica, where she founded Harmonic Living, she remains as dedicated as ever to Acutonics. “Out here, we’re ten years beyond everyone else in terms of integrative medicine and sound healing,” says Birch, who prefers the forks over the gongs, which she feels gives her the ability to manipulate with greater specificity. “We produce the highest concentration of consciousness explorers.”

As progressive as Santa Monica is, though, that adventuresomeness can have its drawbacks. “You find people doing these gong baths in really dangerous ways,” says Birch. “So people get blown out. Or they do too much ayahuasca, or too much kundalini. So then we have to reweave the fabric of their fields.”

As the author of Harmonic Self-Care and an advocate of harmonics for kids, Birch also teaches Acutonics and offers her other forms of therapy over Skype and online.

“Acutonics allowed all my interests and skill sets to come together—I grokked it instantaneously,” she says with a laugh. “Across the board, it’s like my perfect lover. Acutonics has become my teacher. And it’s a profoundly shape-shifting ally. And I see it only becoming more and more acceptable. Someday it’ll be in every school and hospital and part of every first aid kit. It’s exponentially taking off. It’s like we’ve hit the 100th monkey.”

"The Neptune gong arrived, it spent some time at my home for us to become acquainted, and now is in my therapy office. What an incredible presence! It really is like a living being. I am very grateful. I feel like the gong is a good teacher, ally, and motivator in my study and practice. "