Acutonics the Sound of Healing 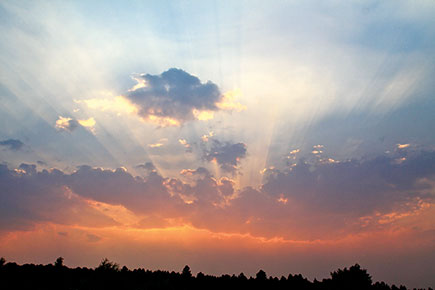 In ancient Greece, the pain of sciatica and gout was eased with flute playing; in Biblical times David treated King Saul’s depression by playing the harp. Today, growing recognition that certain sounds influence health, character, mood and consciousness has given rise to the new field of Acutonics, an energy-based therapy. It is part of the larger field of harmonic medicine, which effects healing through vibration and sound. 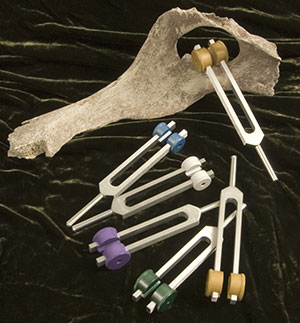 In this noninvasive precisely calibrated tuning forks, representing a natural harmonic series based on the orbital properties of the Earth, Moon, Sun and planets, are applied directly to acupressure points, trigger points, points of pain and chakras to access and open the energy pathways in the body. Acutonics is being increasingly incorporated into spas, and is also appropriate for massage therapists in private practice to use.

“Every cell in our body is a sound resonator,” says Donna Carey, who co-founded the Acutonics technique and the Kairos Institute of Sound Healing in Llano, New Mexico. “Every cell lives in a rhythmic pattern. Each organ has its own cycle and its own pulse. Each and every system has a cycle, rhythm, pattern and pulse that exist in resonant harmony and sympathy to the cycles of the Earth and the heavens.”

The Philosophy of Healing Tones

The belief in sound as vibration, a link between spirit and life force that affects every aspect of creation, is evident in all cultures and mythologies. Sumerians and Taoists, observing nature, inferred that each interlinked piece of the universe is part of divine harmony with humanity at the center. Pythagoras documented the “music of the spheres,” which represents the supreme interconnecting harmonic intelligence of the cosmos. In the 17th century, Johannes Kepler, examining the elliptical orbits of the planets, calculated velocities and demonstrated the relationship between planetary motion and musical ratios, which, three centuries later, Hans Cousto translated into musical tones.

Carey, a licensed acupuncturist and herbalist, educator and poet, was awakened to the power of sound after a near-death experience in which she said she heard “the music of the spheres.” She began integrating a variety of sound-healing tools into her clinical practice, including planetary-symphonic gongs, tuning forks, Tibetan bowls, drums and didgeridoo. Carey concluded that custom-calibrated tuning forks would be the most versatile and transformational tool for achieving the alchemy of outer medicine, used to cure illness and prolong life, and inner medicine, used to transcend being and enter into non-being. According to practitioners, Acutonics balances, grounds, builds, expands and releases energy in the body.

Patty Evans studied Acutonics after receiving it from Carey. She now incorporates the technique into her Hellerwork practice in Taos, New Mexico. “Even weeks after my first treatment, I felt the impact of this powerful work on physical, emotional and spiritual levels, as though I were suddenly in tune and touch with the inner vibration in my body, while totally conscious of how everything in the universe vibrates,” she says.

“It felt as if [Carey was] improvising a symphony on my body,” says Justin Bailey of Taos, New Mexico. “I ended up having a out-of-body experience and found myself in a place of utter peacefulness.

Specialized Acutonics facial treatment (left) balance the hemispheres of the face, and lead to lifting and toning. Acutonics tuning forks can be applied directly to acupressure points (right), trigger points, articulation points, points of pain, and the chakras to access and open the body's energy pathways.

Learning to work with middle-, low- and high-frequency tuning forks sets, as well as with essential oils and a variety of sound healing tools, such as Tibetan bowls and tinchas, gongs, bells and drums, is part of the Acutonics practitioner certification program at the Kairos Institute. Students also learn how Acutonics blends traditional Chinese medicine theory, Western science and cosmic-music theory into a variety of healing settings. There are seven levels of training, from beginner to advanced. Many certified practitioners of Acutonics continue their training and become certified teachers. According to the Kairos Institute more than 40 certified teachers are spreading the teachings of Acutonics around the globe, and there are 2,000 certified practitioners.

“I added it in because it complements massage very well, bringing another dimension into the body along with touch. In some cases it has helped set the stage for a much more effective massage while in others it creates access to levels of the body and consciousness that massage can’t reach,” says Carol Tiebout, a therapist at the Hot House Spa in Seattle, Washington.

“Most of my sessions include at least some Acutonics,” she continues. “I’ve used it to augment massage by accessing craniosacral rhythms, and working with points that help decrease physical pain and muscle tension. I’ve used it to help calm the nervous system and to help bring clients out of the thinking realm and into the language of their internal oceans and currents. I’ve [also] worked with [chronic fatigue syndrome, fibromyalgia], fertility, depression and chronic sinus infections.

“For clients who feel that in some way they do not fit quite right in this world, this a particularly profound experience,” Tiebout adds.

Acutonics is finding a home in spas across the country. At Lake Austin Spa, in Austin, Texas, it is applied with Tibetan bowls. The Living Spa at Monte Sagrado resort in Taos, New Mexico, uses the Acutonics tuning forks to provide a complete energy-balancing treatment.

“My use of the tuning forks has been adapted to bodywork for trigger-point release on muscles and joints, and revitalization of connective tissues to release tension and stagnation,” says Alex Rentz, a massage therapist at the spa. “Acutonics tuning forks are a wonderful tool for energy balancing in conjunction with more subtle bodywork like polarity, craniosacral and visceral therapies. I have also incorporated Acutonics into working with hot stones and gem stones.

Mary Elizabeth Wakefield, a massage therapist at Chi-Akra spa in New York City, uses Acutonics for facial treatments, to balance the hemispheres of the face.

“This pairing of masculine and feminine (the right relates to yin, Venusian archetype; the left to the yang, Martian principle) not only restores the equilibrium of brain chemistry but also promotes an inner sacred marriage that manifests outwardly as a lifting and toning of the face,” she says.

Infinite Treasures of the Heart

Susan Stone, founder of Stone Health Center, in Southborough, Massachusetts, and a certified Acutonics teacher, outlines reasons for massage therapists to incorporate Acutonics into their repertoire: “It saves the practitioner’s thumbs, fingers and hands. It expedites the pain-releasing process. It affords wider access to clients’ pain—emotional sources beyond the physical. It provides therapists with a fundamental understanding of traditional Chinese medicine and new approaches and techniques for working with the energies of the body without having to become acupuncturists.”

For clients, the results form the combination of massage or bodywork and Acutonics are powerful and long lasting.

“While I was aware of what [the therapist] was doing to me [and] there was some pain involved, I started to feel better and better as the tuning forks vibrated and [her] magic touch worked the kinks and stress out of my body,” says Judi Ritchie, a London resident who has received Acutonics treatments at Canyon Ranch spa in Lenox, Massachusetts. “After this session, I felt more energetic than I had felt in six months.

“On my return to Canyon Ranch this year, with a digestive problem, some aches and pains, and very low energy, [the therapist] used shiatsu techniques and also the tuning forks,” Ritchie continues. “I could feel the vibrations travel through my body as she applied the forks to my pressure points, sending energy to parts of my body where I was in need of it.”

“Sound is the mysterious key of memory—cellular, muscular, emotional and spiritual,” Carey says. “It helps us to unlock the infinite treasures of the heart. Acutonics speaks to the work of the heart, reminding each soul of its attunement with the harmonies of the universe, where true healing happens.”