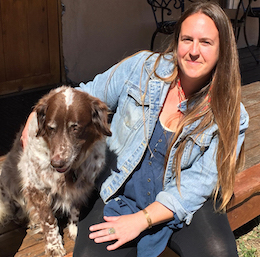 Diane Wenslawski recently visited the Mothership with her dog Oak, driving here from her home in Bodega, CA. Diane was originally introduced to Acutonics when she was seeking a path for working with horses. Her search led her to Patty Warren who was offering Equine Acutonics Level I: Balancing Horse and Rider in Southern California. “The class blew my mind it was my first time working with the forks and when I placed them on the horses it was really powerful, it was not anything that I could have expected, because of the energetic nature that came through. Horses are shamans and the warm blood horses that I got to work with were incredible teachers. As I worked on the spine of one horse I literally felt his ancestral lineage come through, it was amazing to get to this energetic realm with horses.”

After studying with Patty, Diane volunteered to work with rescue horses and her interest in working with the tuning forks continued to grow. She wanted to learn more about using these powerful tools with humans and in her quest for teachers she discovered Katie Mink and Laurie Herron who offer courses in Northern California. Diane has been on the fast track, taking Acutonics Level I – IV, Harmonic Pathology and Sedna with Katie and Laurie. She also assisted at Camp Acutonics this summer.

Diane feels a strong connection to New Mexico and use to travel here twice a year to study ancient cultures and the movement of people throughout the world. So learning that Acutonics was based in northern New Mexico she decided to take a road trip to the Mothership. “What a perfect place for headquarters, the views are spectacular, and there has been so much work here on the land both inside and out.”

Diane’s love for the land and the natural world led her to assist a friend develop a permaculture farm in California. She also loves the night sky and the myths and archetypes associated with the constellations. Her interest in other cultures led her to spend time in Guatemala where she studied the Spanish language and spent time in a Tzutujil village living with a local Mayan family.

Diane feels called to be of service and the future promises many great adventures, including opportunities to deepen her understanding of using Acutonics to work with the land, horses and people.