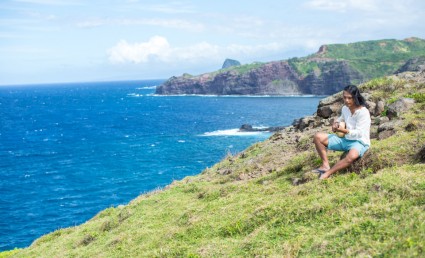 Below is Osamu Moriyama’s diary of his experience earlier this year at the Acutonics Levels II and III workshops, which were led by Theresa Lee and Ron LaPlace in Kootenay Bay, British Columbia, Canada. Osamu is a sound healer and Acutonics student, as well as a Reiki healer, musician, and shaman. (This is a slightly edited version of Osamu’s blog)

In addition to his Acutonics studies, Osamu is a sound healer, Reiki practitioner, musician, and shaman.  He shared his recent experience of his classes in Kootenay Bay British Columbia in his personal diary and he granted us permission to share this with you. One of the aspects in his narrative that touched me deeply is the experience he shares of being called to sound healing through the sound of the flute while on a visit to Taos, New Mexico in 2008, what an extraordinary synchronicity, and we hope he will return one day and visit the Mothership. This is an edited version of his original blog post, which can be found at motherearthsound.com.

After getting off the ferry at Kootenay Bay, in British Columbia, Canada, it was only a ten-minute drive to get to Theresa Lee’s house. We arrived at 9 am sharp, and were welcomed by Theresa and her two big Labradors. We hugged, and immediately I could feel an intimacy in spirit between us. Theresa would be our teacher for the Acutonics Levels II and III workshops, which were being led by Ron LaPlace. Read More

The house was charmingly settled by the beautiful lake, which was surrounded by the huge area of the forest. I remember thinking, I love this place, I love this house. Ron was already inside, and he too greeted us with a big smile. We then met the other students, all at once, most of them Canadian. Then Theresa took us to our rooms, which were apart from the main house. On the left side door was the healing room. When we entered there were so many gongs I couldn’t count. How many are in here?!  I asked: “Oh, around 13 in here”. There are others, I was told, in the main house.

Theresa has all the planetary gongs, manufactured by Paiste. “And they are attuned,” she explained, “to the frequency of all the planets in our solar system and we are going to immerse ourselves into the ocean of those vibrations.”

So the Acutonics Level Two class has begun.

There are eight people—including me and Noriko.  It’s a small group but it fits the size of our space. Amazingly, there are five men out of the eight total students. This is the highest ratio of men to women of any healing class or event I’ve ever attended. Even Ron and Theresa are amazed, and they praise how unusual it is, but how wonderful.

In Acutonics Level I, we learned the usage of the middle frequency of the tuning forks, which attuned to the vibration of the Sun, the Moon, and the Earth. In Level Two, the High and the Low frequencies of these tuning forks will be added.

Theresa and Ron introduced some protocols (processes to work on for specific types of balance). We also discussed which tools are necessary or best for certain conditions.

The basis of Acutonics is to apply the tuning forks of the solar system onto acupuncture points. Think of these points as a push button for access to all body systems, and the energy systems outside the body as well. We bring balance and open, nurture, and activate these imbalanced and stuck points with the tuning forks. How we choose tuning forks and which point or points to apply them to depend on the therapist’s sensibility and experience. But we need to take a step to learn the basics here in class in order to lay a strong foundation, so that we can be more creative and inspirational.

The Acutonics system has a deep relation to Eastern medicine, Eastern philosophy, and spirituality. So they often mention the Five Elements—the I Ching. This is interesting.

Their wisdom was way ahead of their time—and ours. Ancient people always know much better than us.

Acutonics also talks about the concept of shamanism. I see that in ancient times sound was used for many purposes, such as creating altered states of consciousness, purification, prayer (for rain, for harvest), purifying a soul, retrieval of a soul, helping a soul transition to the other side, etc. The shamans are the people who use the sound as such tools.

The class was in the midst of clear energy, which this place creates. I felt time go by slowly and sleepily. On this day, the weather was so nice—sunny skies—we went outside to see Ron’s demo session and do our practice. During the three days of class we had breakout sessions where we’d partner up and practice the techniques we’d just learned.

All of the students are so cool. Being the only two Japanese was not at all a big deal.I took a picture of us all, my new soul friends, and even in the picture you can see everyone has unique vibes.

In this class, we were introduced to the planets in our solar system. In addition to what we already know—the Sun, Moon, and Earth—we got Mercury, Mars, Venus, Jupiter, Saturn, Uranus, Neptune, Pluto, and Chiron.

And you may be wondering what the heck the planets have to do with healing. It’s because the planets are interacting with each other as well as affecting human life. For instance, the Moon has a lot to do with our emotions, thus, subconsciously,  some emotional issues may rise up along the Moon phase. Each and every planet has its quality, and we can utilize these qualities by attuning with them.

I’ve heard that before WWII, the Japanese people were studying God’s myth of Shinto, the story of Amaterasu in school, and I heard someone say the reason why Japanese people lost their souls is because they stopped teaching it in the school, so they don’t know who they are, they’ve forgotten their root spirit. And I agree with this.

So I thought learning a myth is such a wonderful idea to bring the spirit back within us.

On the second day of Level III, Ron invited us to express our personal relationship with sound. It started with Ron’s story. Then he asked each of us, one by one, to talk about our experience with sound. Everyone had their own story, and expressed themselves and shared their stories with their instruments or their voices.

Osamu shares his personal experience of being called to sound:

I started playing the Native American flute on a trip I’d taken to Arizona and New Mexico in 2008. When I visited Taos, by the Rio Grande gorge bridge, I heard the sound of a Native American flute—it fascinated my soul. So I walked in the direction of the sound. I found a man who was playing music with an audio player. He said he was the one playing the flute on the CD. So I bought a couple of his CDs and I started listening to them on that trip.It felt like a calling. It got me into sound healing and shamanism.

Since then, I’ve dedicated my sound to a spirit of land and the Mother Earth to connect with nature and spirit. These places are sacred places, so-called power spots: Sedona, Wupatki National Monument, the Hopi Prophecy Stone, the Mayan ruins in the Yucatan, Machu Picchu, Mount Shasta, and the Hawaiian Heiau and volcano.

I shared the space of sound by playing Tingsha, Caxixi, Seedpod, Native American flute and guitar.

Noriko Shares her personal experience of being called to sound.

She told the story of how she started to sing. She never wanted to become a singer, she was a keyboardist and composer but in 1995 a producer she’d been working with on a project encouraged her to sing. The first gig the producer booked for her was performing at The Blue Note jazz club in New York City—just one month before she’d decided to sing and train.

Soon after that, the second gig was for a charity concert aiding Kobe’s earthquake refugees. She sang in front of 5,000 people.

These two experiences traumatized Noriko. The next year, though, she met me and we started making music and fell in love.

We made an album together—Solaris.

So she sang her old song, “Sand Island,” from the album Sand Island. It’s the song that has the lyrics that portray the Creator and the illusion of the world.

It’s been such a long time since the last time she sang in front of an audience. She has been so busy dedicating her energy to healing, but she told us she has the desire to sing again and will make more music. So let’s see what’s going to happen.

All of us performed and shared our talents and the gifts through the sound.

Ron was impressed and moved to tears—everyone had expressed their sounds from their hearts.

Learning the planets was a great opportunity and fun. We took sufficient time for each planet. This was the process to align with and be familiar with each planet’s vibration.

Ron and Theresa talked about the energy and characteristics of each planet and gave the Greek myth for each one. Then, for each planet we moved to the healing room in order to align with the music and the gong.

Ron played a piece from “The Planets,” which had been composed by Gustav Holst. Theis orchestral suite is very famous but I had only heard Jupiter before.

It was interesting to grab the composer’s intention and see how he interpreted each planet.

After he finished, Ron described the planet’s character, to remind us and connect with its energy. It was easy for us to connect with the planet, as Theresa started to play the Planetary Gong.

The gong’s big, swelling wave of sound would wrap around people in the room, creating many layers of overtone. Theresa’s gong play was perfect. So perfect we could immerse deeply within the bath of sound. I was almost in a trance state.

The planet Jupiter was even on his T-shirt! You’ll be reminded of the vibration of Jupiter at any time. I want it, too!

We teamed up and divided into three men and two women. The men’s healing club had two men working on one man, who was lying on a massage bed.

It was really good experience.

That was the last thing for this class, and then the students received their certificate for Level Three.

The very last thing we did was a ceremony that was to connect us with the energy of the Big Dipper.

To read the rest of the article, proceed here.