It’s not as though Theresa Lee’s life has changed dramatically since meeting (and then marrying) Will Morris several years ago. But it has changed. 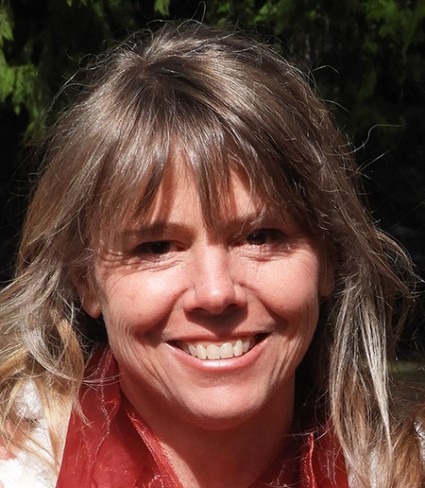 Since last speaking with her, she has continued to deepen her Acutonics practice, located in the Kootenay Sound Healing Centre in the tiny Canadian town of Riondel. It probably is safe to say, though, that the influence has been mutual: Will has reinvested himself in Acutonics as much as Theresa has taken her practice to an even more profound level. And she gets just as much out of her students as she does from her personal life.

“Will has been taking all the Acutonics classes, and he brings an incredible insight to what we’re doing,” says Theresa. “He has a very large gift. He has a lot of experience teaching. And so he’s had a powerful influence on me. We’ve done musical performances together with gongs. He plays the flute.

“Acutonics,” she adds, “has been responsible for us meeting as a couple. In that way it has been highly transformative.”

It certainly affected Theresa, who took to it the first time she tried it back in 2010. That was when she was gifted a treatment with Eva Chobanuk in Nelson, British Columbia. She started taking the teacher training classes two years later, and has continued to learn and grow since then. “I’m pretty shy as a person, but I also have a constant willingness to be better and be uncomfortable. Juiciness comes from living more presently. And stepping into fear is very rewarding.”

As nervous as she may be about things, she continues to push herself. And her practice.

“I’m always looking for a modality that fits with who we are and what we do here,” says Theresa. “Acutonics has always had an immediate and very powerful effect on me. A good one. And a lot of my focus goes into my teaching of Acutonics. And so I get a lot of learning through my students.”

As small as Riondel is, at last count a population of maybe 300, Theresa estimates that there are as many as a dozen people using tuning forks up there. “In this town, there’s a huge pile of us practicing with the forks and so there’s a bigger willingness to try it,” she says. “People are having success, so there’s a quiet movement and an openness to these kinds of healing.”

Which is partly why she and Will decided to expand their Kootenay center, and expect to open a newly finished building later this fall. “Its official name will be the Kootenay Sound Temple and Healing Centre,” says Theresa. There’ll be a gong center and a treatment center. It’s 100 feet from where Will and I live now. And it’ll also have a teaching space and a recording studio for Will.”