Elle MacLaren, as many an Acutonics practitioner before her, originally sought out acupuncture to help her with her issues. Issues in her case being hormonal. Then one day Sylvia Pelcz-Larsen, whom she’d been seeing in Boulder (where Elle had been living at the time), pulled out the tuning forks. “I said, Wait a minute, I’m here for acupuncture,” recalls Elle. “What’re these? What’re you talking about? She ended up using the forks more than the needles.” 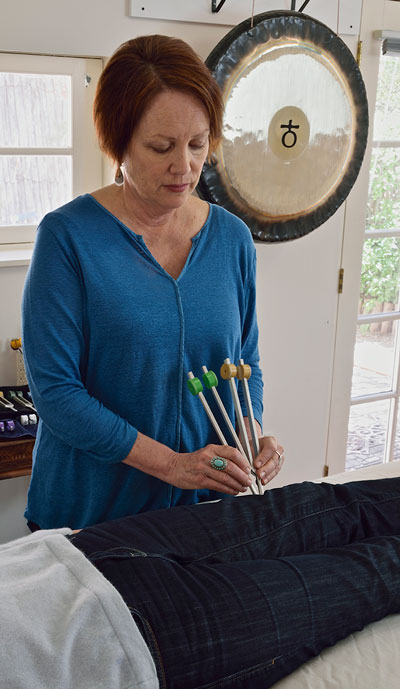 Elle Maclaren, as many an Acutonics practitioner before her, originally sought out acupuncture to help her with some health concerns. She began seeing Sylvia Pelcz-Larsen in Boulder (where Elle lived at the time) who was using Acutonics tuning forks more than needles. Elle was dubious about them at first as she was expecting Acupuncture, but soon realized how effective the forks were.

After a couple of years with treatments from Sylvia, Elle asked about becoming an Acutonics practitioner herself. She’d been very busy as a mom, as a painter, as a wife, as someone who had been doing things for other people (possibly more than for herself). Her kids had gone off to college and she wanted to do something to help others. She liked taking care of people, and Acutonics, something that had done so well by her, seemed perfect. When she finally posed the question to Sylvia, Sylvia’s response was of course. I’m a teacher. I can teach you.

Elle began Acutonics classes in 2008. In 2009, she was diagnosed with breast cancer.  Suddenly she was facing surgery followed by chemotherapy. 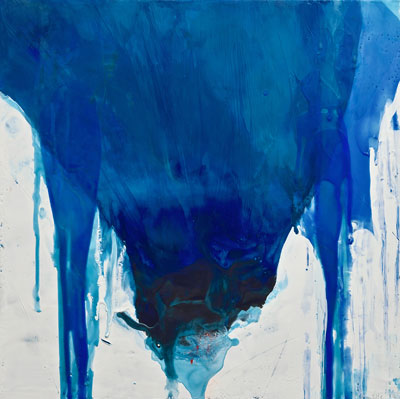 Elle has always worked with integrative health care practitioners including acupuncture, chiropractic and Reiki (which she trained and certified in). When she was diagnosed with cancer she knew that she wanted to incorporate the best of Eastern medicine into her Western treatments. Sylvia also insisted that she continue with Acutonics twice a week while she was going through chemo, and, since this was a stretch for Elle financially, Sylvia gave her two for the price of one sessions. “People couldn’t believe how good I looked during that time. And my energy was good.”

“Once I was feeling better I wanted to give back”, says Elle from inside the cozy studio workspace she has not far from Canyon Road in downtown Santa Fe. “For several years I gave complimentary Acutonics sessions to other cancer patients.”

Elle was born in Detroit in the early 1950s and raised in the suburbs of Farmington Hills, now a large city in itself, but back then it was largely farmland. Her mom was a stay at home mom and her dad was a chemical engineer who became the president of a chemical company in Ferndale, MI. Elle was the oldest of three daughters (one sister became a city planner and the other is a civil engineer turned kitchen and bath designer) and always into art (drawing and painting mostly) and music, taking piano and voice lessons.

After high school, she attended Alma College, about 2 hours north. A small visual arts school, with an emphasis on small. Elle focused on drawing and painting, and the school left her largely on her own. She got married a year after graduating college and continued to work in the visual art field and taught piano.

In 1981 she and her husband, a banker who went on to become a financial analyst, moved to Boulder. She painted some, but kept in the art world mainly as an artists’ rep., selling art for other artists and for a gallery. 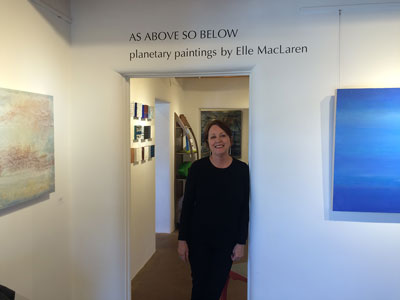 When she had kids, she became a stay at home mom and got back into her own art again. As the kids grew, she began to get her work out into the world through galleries and with her own artist rep. in Denver.

In autumn of 2010, after the cancer treatments and with an impending divorce, she started to think about relocating to New Mexico. She had wanted to live in Taos where she visited often (“Taos is where my heart is”) but decided to try Santa Fe since she had friends there. She found a place to rent for 6 months to see if she would like it. “Within two weeks I knew that Santa Fe was the place. I loved it.” She stayed and has no plans to move anywhere else. She also continued her Acutonics education and became certified in New Mexico while also pursuing her profession as a visual artist.

Elle’s art is very much tied into her Acutonics practice (her thesis was an exploration of the surfaces of the planets painted in encaustic while listening to NASA recordings of the sounds in space). She is now wanting her work to be more environmentally charged and is working on a series of melting glaciers.

“Gradually,” she recalls, about her initial experiences with Acutonics, “I felt better than I had with just acupuncture. The experience with Acutonics goes to another level that’s so much deeper. Acutonics builds on itself and the more you do it the better you feel”.

She’s found that to be not just for herself but for most of her clients. “Some people get better—and fast,” she marvels. “So Acutonics helps in that respect, too. They’re not only getting improvement for their conditions, but they’re improving more quickly. Sometimes in just a few sessions.”

“Other people,” she says, pausing to think it over, “may not see results as quickly. But it just depends. I rarely find somebody who doesn’t experience some beneficial shifts from this work.”

She still works with people who’ve been through cancer or are in the midst of their treatment program. She also treats people with thyroid problems, women going through menopause and people dealing with physiological issues, such as trauma, among other conditions. And she’s found it to be “Brilliant for hormones.”

“I love this work,” she says with a very genuine smile. “It’s like when I paint. I get into a zone. It energizes me. I feel blessed. Every day I say thank you. It’s so rewarding because you see such good results. And just the work itself—I’m very intuitive when I work. I love the connection with the other person. There’s a dialogue with their bodies and what they need.”

“On some level,” she adds, “it was perfect that I ended up doing this work. There’s music, there’s harmony. Acutonics helps people to get through things. It supports and boosts them to help guide their own body back to harmony on their healing journey”.

For more information on Elle, go to Vital Vibration or contact her at 505-467-9957 or ellemaclaren12@gmail.com.