Candice Lambert is based in Queensland, Australia. She has completed the entire Acutonics curriculum with Eeka King. Although she initially intended to take her time learning this medicine she was immediately hooked and took every class as soon as it became available. She has also completed clinic hours with Judy Bernard. She was first introduced to Acutonics in 2015 with Mary Elizabeth Wakefield and MichelAngelo, traveling to Minneapolis to complete the Gold Standard Facial Acupuncture Certificate. 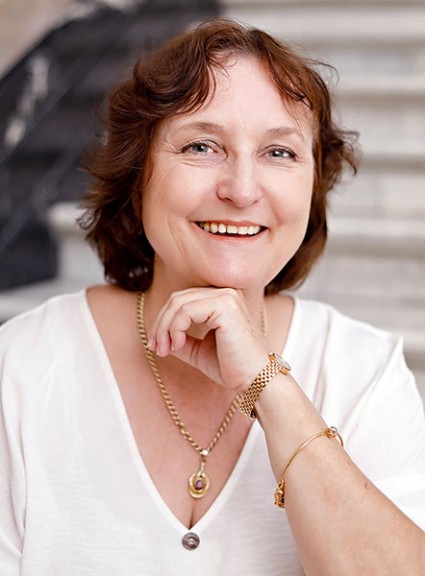 Candice was born in England in Oldham, which historically was a cotton manufacturing town in the county of Lancashire. At an early age her parents moved to Manchester, a large city in the Midlands of England. As a child she describes herself as a bookworm, and very boring.

"The only sport I could do was swimming and, much to everyone’s surprise, I excelled at it. During netball practice at school, I would hide in the apple orchard next door, eat apples and read books. I thought anyone who was good at sports was peculiar."

Her mother a primary school teacher, was English and her father a hairdresser, was Polish. She had two brothers, the older one was a bookworm too, and the younger one excelled at all sorts of sports. She reflects: “He would try and engage me in long conversations about the football team, Manchester United. My eyes would go crossed”.

Her family emigrated to New Zealand and then Australia when she was a child.

Today she lives in Brisbane Australia, a vibrant semi-tropical city in the state of Queensland.

“I have one daughter who is training to be a yoga and meditation teacher. She excels at sports, especially basketball, and likes to go for long hard hikes - like up mountains in Norway!  On several occasions when she was a young child, my mother would remind me that my daughter liked organized sports and I that I was the peculiar one.”

A love of travel prompted Candice to study nursing, and the emotional and physical toll led her to study TCM, where she met Eeka King. Candice continues sharing her story with you below.

Education from Nursing to Acupuncture
I studied history at university in New Zealand and decided that would never get me a job. As a young adult I took my nose out of books and realized that the world was quite interesting, and I could have the adventures people had in books. I started to travel.

I needed a career which would get me a job anywhere in the world, so I choose nursing and completed my degree in Brisbane. I was then able to follow that dream of travel. Since then, I have nursed all over the United Kingdom, and in Australia in outback towns and big cities. I have experienced all sorts of nursing from medical wards to psychiatric nursing. The Emergency Department became my specialty as I loved the fast pace. Nursing is complex, and full of human meaning and drama. However, it does eventually take an emotional and physical toll. One of the deciding factors to push me into another career was the need to see people take responsibility for their own health.

As I walked past the Australian College of Natural Medicine on the Gold Coast in Queensland there were two courses advertised in the window— one on becoming a naturopath and one on becoming an acupuncturist - I chose the latter. I loved it and met Eeka King (Acutonics Teacher) at the college and we shared some Traditional Chinese Medicine (TCM) classes together.

Since then, I have worked part time in different TCM practices and part time in nursing. At first, I would say the Western Medical paradigm got in the way of using my knowledge of Traditional Chinese Medicine (TCM). Life matures you, and now I have a strange blend of both in my head. When I see acupuncture clients, I can quickly understand their Western medical conditions, however, I will only treat from the TCM pattern perspective to honor this ancient medicine.

I expanded my practice by going to the USA between 2015-16 to complete the Gold Standard Facial Acupuncture Certificate with Mary Elizabeth Wakefield and MichelAngelo in Minneapolis. Between 2018 and 2021 I completed many of their Facial Soundscapes modules in New Zealand and online.

Whilst facial acupuncture and tuning forks can be used for facial rejuvenation, I primarily use the techniques for medical conditions such as facial droop from stroke or Bell’s Palsy, or I integrate them into a standard acupuncture treatment.

I loved my time in the USA and managed to travel to Chicago, Los Angeles, and New Orleans. Curiously enough the USA reminded me of Europe with its huge diversity of culture and history between each state. New Orleans blew me away with its rich history, diversity of people and the music — my God the fabulous music! One day I will get back to the Spotted Cat music club, get back to the Voodoo Museum and watch the cyclists go around the city at night with lights woven into the wheels of their bikes.

An Enigmatical Relationship with Acutonics 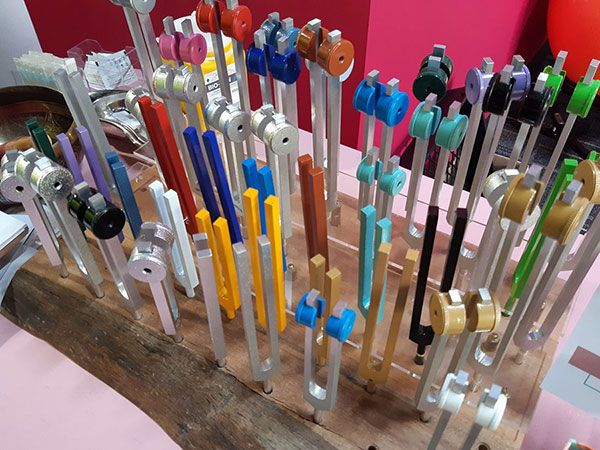 My studies in the USA with Mary Elizabeth Wakefield and MichelAngelo introduced me to tuning forks and it whetted my appetite. Back in Australia in 2019 I came across Acutonics being taught by Eeka King - my acupuncture and TCM colleague. I am a strong believer in synchronicity. It was my aim to study this discipline slowly; that didn’t happen as I enrolled in Eeka’s courses as soon as they appeared and bought all the forks as soon as they became available. I was hooked. Here I now am in 2022 aiming to complete my Acutonics Diploma.

“Music has charms to sooth a savage breast," and so does Acutonics.

I have an enigmatical relationship with Acutonics. I have a foot in both camps of the science of Western Medicine and the internal mapping of the human energetic field with TCM. The skills and techniques the TCM practitioner use seem to be enhanced with Acutonics. Instead of using a metal needle to coach Qi to an area of deficiency or moving it away from an area of stagnation, I now can send music along the meridians. It seems to have a profound effect on the emotions and spiritual health of humans. I once had a large tradesman weeping in the corner after a treatment. His girlfriend explained he had an emotional shift after the treatment. As regards physical issues one patient did say the effect on her pain was more profound and lasted longer than needles or cupping.

Integrating needles and forks enhances the speed of a treatment and enables me to work on multiple areas. For example, I have a long-term stroke patient with mobility issues. I needle her scalp to stimulate the motor and sensory part of her brain and then I will use various forks on the needles, such as Mercury and Uranus, to stimulate the nerves and take electricity to those parts of the brain affected. Other ways I use the forks are to influence the needle. Acupuncture uses techniques to stimulate Qi or calm it. Instead of using complex needle manipulations to achieve a therapeutic effect, I will simply use the sun fork to enhance Yang, the full moon to enhance Yin or the earth day fork to stimulate Qi. Overall, this is much quicker and easier than needle stimulation.

Acutonics is for everyone, however acupuncture and needles are not. Children, the elderly, people who are exhausted or emotionally distraught often respond better to Acutonics than acupuncture. Therapeutical it gives me another treatment option and I love sending music and vibration along the acupuncture meridians. 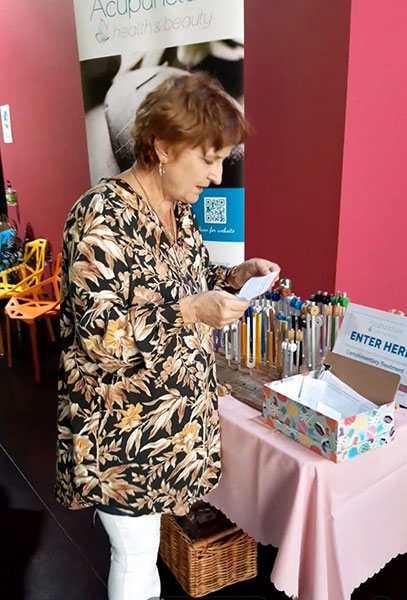 I have a home practice now. COVID hit my practice hard, so I relied on nursing financially to get me through. COVID also proved emotionally exhausting to patients and my nursing and medical colleagues. Many are still recovering. I was able to use my forks for my personal self-care, and I am now enjoying more clients in my practice.

Integration of needles with forks can enhance a treatment. I occasionally use gems and roll-on aromatherapy; however, you must be careful of allergies or dislike of the aromatherapy smell in patients. I also use hand chimes and Tibetan bowls with the forks. I am aiming to purchase gongs. An example of how added equipment helps therapeutic effect is the use of a Tibetan bowl on the sacrum before needles/forks are used. It relaxes the lower back and enhances the Acutonics therapeutic effect.

Once a person is properly introduced to the tuning forks, I find they begin to love them. The forks are seductive and sell themselves once they are displayed en-masse as I did at a recent trade show. People are intrigued as they are so visually beautiful. I am careful as to how much of the theory I give to people as it depends on how open they are. To some people I simply explain the different sounds/vibrations can enhance therapeutic effect in the body, whilst to others I give the whole cosmic philosophy behind the forks. I have a solar system in my clinic.

Life beyond Acutonics. What do you do? For fun? For relaxation?
I learned to love exercise and I now do pilates, yoga, bushwalking and gardening. I am passionate about the health of our environment and my political and social choices now reflect this. Guerrilla gardening (raising plants on land you do not have a right to cultivate) interests me. I throw seed bombs with Australian native plant seeds onto the vacant land next to railway lines, and I planted out an entire sad looking small park next to the house where I used to live with native Australian plants. I met a fellow guerrilla gardener during one of my forays into this park, and we became friends. The park is now a haven for the beautiful brightly colored birds we are fortunate to have in Queensland. Getting caught is a $300 fine. So far so good…….

What’s next for you?
I have been studying with Eeka King and Judy Bernard to finish my clinic hours. I am now contemplating which subject to do for my thesis to complete my Acutonics Diploma. From now on I am very happy to undertake any further studies under the Acutonics umbrella, especially learning how to help the Earth by using the forks on flowers, crops seeds and trees. I might have to travel to New Mexico for this……I shall pop into New Orleans on the way.