Keith is a Cancerian born in Southwark, London on July 12, 1950. I was privileged to have a safe and secure childhood with loving parents, a lovely sister and my black Labrador dog, Jess. As an early teenager I loved being a boy scout. It truly was a time of innocence, wonder and adventure. 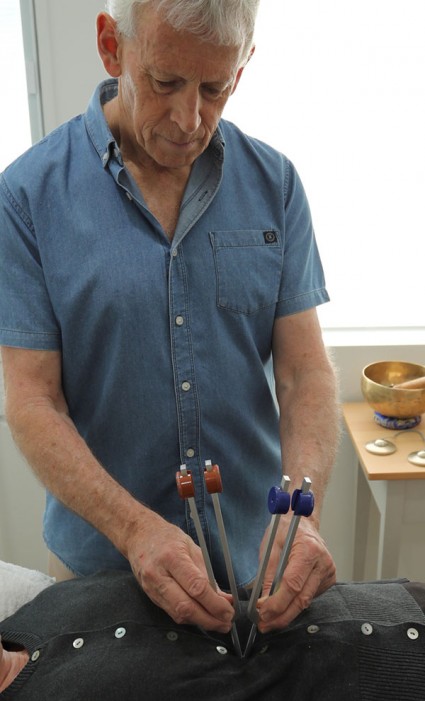 As I moved into adolescence, I started to ask questions about life. I can’t remember when I first started to think there must be more than where my education and upbringing were taking me. I started to wonder what life was and what was its purpose?

I left home just before my 19th birthday in 1969 and spent the next few years as a hippy: long hair, communal living, LSD, big rock concerts and the whole thing. During this time, I lived in London, Manchester, Bristol and Paris. Amongst other things I practiced some yoga, tried meditation and listened to a number of spiritual teachers. All were enlightening, but I still hadn’t found what I was looking for.

Then in 1974 I came to Australia to live. And it was here that I met my spiritual teachers (from many lives). You know how it is when you hear a truth that sits in all the right places in you. I’ve been learning ever since. I moved to Goulburn, a country town of around 23,000 people, 200km (125 miles) south of Sydney. It was a traditional sheep farming town and a big change from the cities I had always lived in.

I continued to explore and learn about life and spirit and also to participate in cycling, running and triathlons. In my school years I’d never really learned to apply myself to many things and this had been a pattern throughout my life. I think it was from endurance sports that I learned the principle of preparation and patience. So, training for events prepared me for my next major endeavour, study. 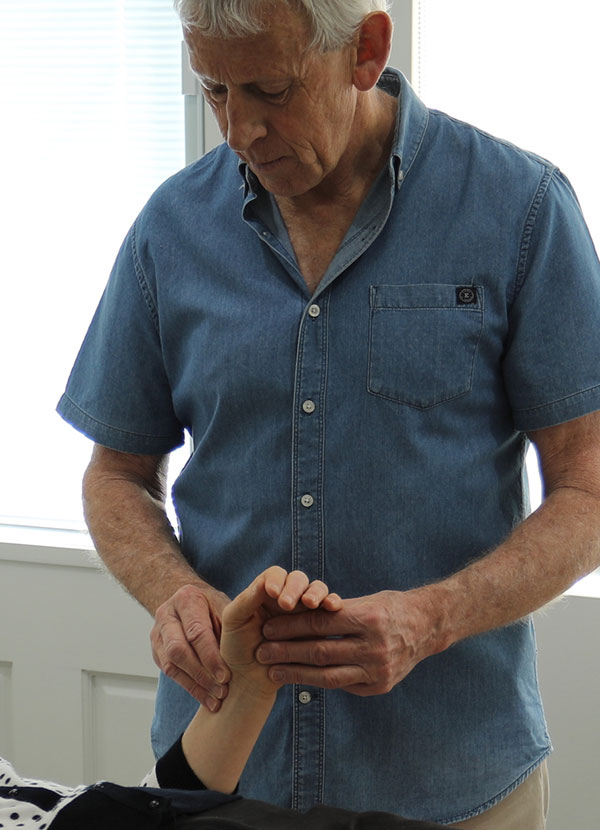 As this life unfolded, two expressions seemed to become emphasised. These were teaching and healing. In 1977 I studied massage and practiced part time for a few years. Then in 1985 I did an introductory course in acupuncture. At that time acupuncture was still a young profession in Australia and in 1989 I enrolled to study it formally in Sydney. After five years of study and a short internship in Guangzhou, China, I graduated in 1994 with a Bachelor of Applied Science (Acupuncture).

I had my first experience of teaching when I was travelling to Australia by ship from England. Having practiced some yoga in England I was conscripted to teach yoga classes every day for the four-week voyage! You can imagine a 23-year-old hippy walking into the ball room for the first class, expecting a handful of people and finding about 50! It must have been OK though, as the numbers grew over the course of the voyage.

Years later I taught some spiritual classes, did some cycle coaching and took some classes in massage and Traditional Chinese Medicine (TCM).

After I’d been practicing acupuncture for a while, I became a full-time college teacher in Canberra, lecturing in Chinese Medicine, Human Anatomy & Physiology, ethics and research sciences. I loved my years of teaching, which I finished in June 2017, after seventeen and half years.

At the beginning of 2015 I was planning how I would gain my continuing education points for the year (necessary to maintain professional registration in Australia) when I came across a three-day course in Acutonics. I wondered what it was and read some more. It looked interesting and what really swung it for me was that the course was being held in the Byron Bay area, one of my favourite places in Australia. So, to be honest, I went to the Level I Acutonics course out of mild curiosity but mainly to earn education points! 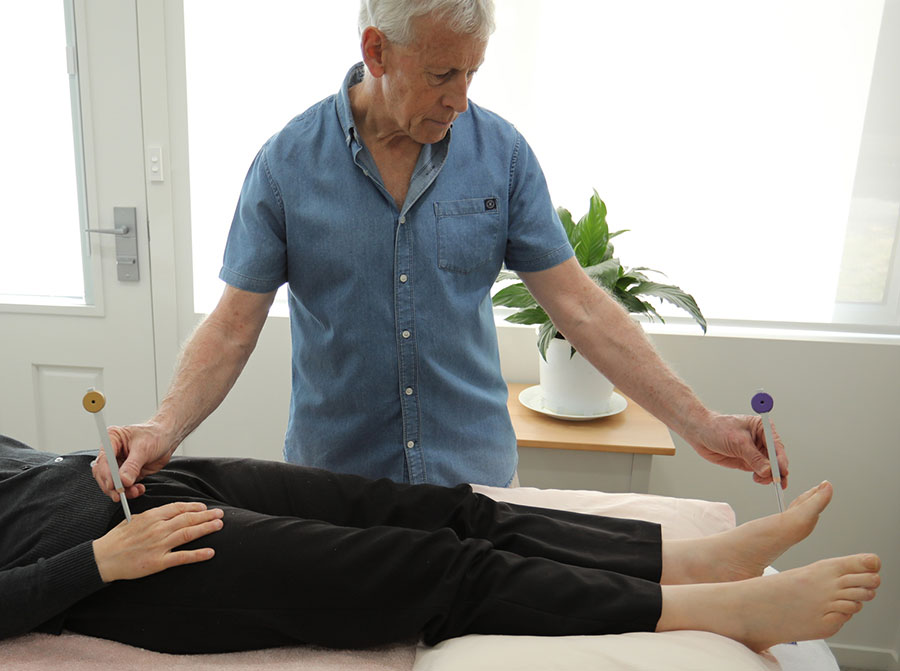 Our teacher, Eeka is a gifted and inspirational teacher and by the first morning break I was completely hooked, and I haven’t looked back since. As we age (I’m currently 68) it is easy to just stick with what we know and work with versions of that. It is wonderful having a whole new channel for healing and helping people through the power of sound. I have been studying one Acutonics level a year and I love working with the new skills and techniques after each course and absorbing and applying them over the year.

I have found myself particularly drawn to working with emotional and attitudinal issues. So, for example, I have seen one patient coming off anti-depressants (under her doctor’s supervision), a lady who struggles with being assertive in her life and a gentleman who gets headaches with some psychic exercises. I have always been drawn to understanding and working with how we make our illnesses and circumstances. Over the years I have come to believe that we make everything in our world with our thinking, with no exceptions. “As I think, so I am”. A few years ago, I delivered a paper at the Australian Acupuncture and Chinese Medicine Association Annual Conference entitled ‘One Cause of Disease’. I proposed that the three traditional causes of disease in Chinese Medicine (Pathogenic Factors, Emotions and Neither) were actually all created by one cause, our thinking.

Over the last three years I have found Acutonics to be the most profound healing tool I know of to address the deepest levels of our making. Last year I experienced a wonderful example of the power of Acutonics when an acupuncture patient with chronic Parkinson’s experienced adverse reactions to needles as they caused her pain and triggered muscle spasms. I suggested trying Acutonics and the effects were profound. For more to this story: https://www.facebook.com/groups/acutonicshereweare/permalink/2056778771001124/

I have also had opportunities to integrate Acutonics with my esoteric and spiritual pursuits. For example, a small group of which I am a part work with the energies of each new and full moon and with each solar solstice and equinox. Then along came Acutonics into my life, with its unique tools for enhancing the energy centres associated with these solar and lunar cycles. So tuning forks and chimes have become an integral part of our work. 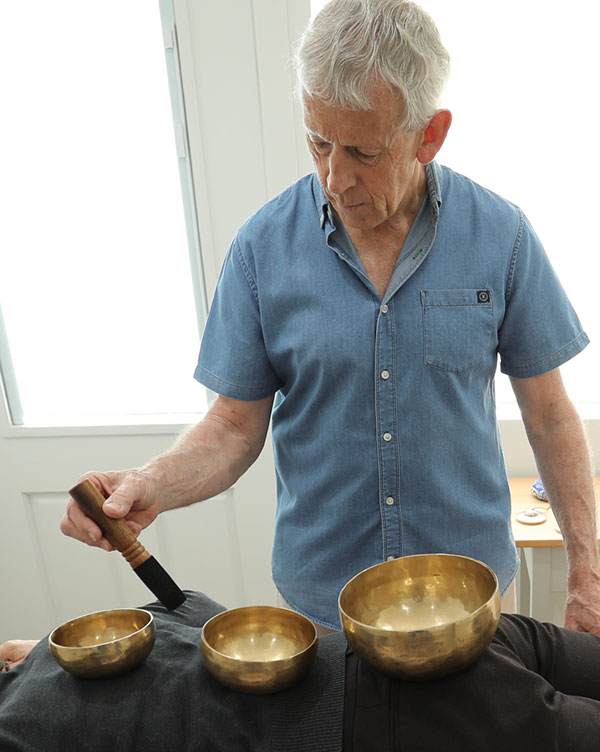 I have recently had a new expression of Acutonics. My yoga teacher asked if I could do tuning work with a group of people. I already employed hand chimes, Tibetan bowls, Ting-Sha and gongs in my practice. So, I thought about it and came up with a series of group sessions, each having two specific themes. The sessions guide the group through listening to, and visualising the sounds flowing through various acupuncture points and energy centres. The feedback was enthusiastic. I then had a request to deliver these sessions again, from some esoteric students in Canberra. These were also very well received.

As well as tuning the attendees, the group sessions are introducing a lot more people to Acutonics. The design and delivery of the sessions calls on my experience, both as a healer and as a teacher, plus they are just so much fun to do.

Currently as a Level 5 student and intern I have so much more to learn in the world of sound healing. Acutonics has become a wonderful source of beauty and inspiration in my life’s journey! I’d like to include a big thank you to Eeka, her teachers, my fellow students and my lovely partner Jude.