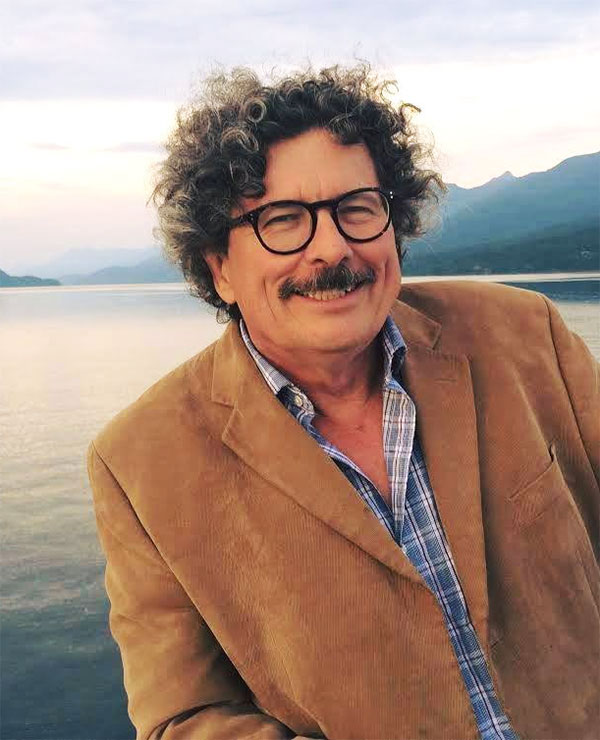 The practical use of Acutonics® for the summer solstice is what this article is about. As for the subject of predictions, there are readily available sources, so we won’t do that here. This is about ritual and treatment… Let’s get down to it!

My favorite forks for the solstice and equinox moments are Ohm, Sun, and Zodiac. They are fundamental to the moment of the Sun’s passage over the ‘stakes,’ which is an early astrological term for the axis of the equinox and the solstice.

To examine such passage in time, one calculates a chart for the moment the sun goes into tropics of Cancer or Capricorn… the solstices (see Figure 2).[1] Charts are also calculated for the equinox when the Sun passes into Aries or Libra.

A chart calculated for the moment the Sun moves over the stakes highlights the coming quarter. This is called ‘mundane astrology’ when considering the effects on the world.[2] For Acutonics, the movement over the stakes can be used to build individual treatments for the season.

The Ohm, Sun and Zodiac forks can be used on the fire point of a fire channel for the summer solstice. In addition to these forks Mars, the planet of the season is used. This concept is based on a text from the Han Dynasty (approximately 100 C.E.). It is called the Spiritual Axis (1):

[1] This is the reason that this type of zodiac is called a tropical zodiac. It is based on the stakes of the first days of spring, summer, fall, and winter.

[2] Such charts are calculated in the location of a countries capitol in order to understand the fate of nations. Such techniques were common in Greek, Medieval, Renaissance periods. With the translational efforts bringing core texts from those periods to light, and contemporary astrological practices.

As a specific example for this solstice, use any of the previously discussed forks. Then locate the point of the season on the same channel as the season. For this summer, it is the fire point on a fire channel. There are four options. They are the Pericardium 8 (palace of toil), Heart 8 (lesser palace), SI 5 (yang valley), and SJ 6 (branch ditch).

Such point selections are then seated into pattern-based treatments and sacred geometry structures of the Acutonics® system. These include the three treasures, hua tuo jia ji, and other concepts that build on and connect with these fiery points.[3] The Cosmic Capstone is the perfect expression, with these points: Du 20 (gate of the ancestors), P 8 (construction palace), and Ren 17 (chest center) (see Figure 1).

[3] If we really want to get into it, the Fire points connect to the alchemical substrate of the harmonium mundi ~ spiritual fire.

Ohm resonates at an octave of the annual motion of the Earth around the Sun. Thus, Ohm connects with the essential motion that defines the changes of the seasons and thereby achieves a role in the change-of-seasons rituals and treatment. As Ohm is resonant with the movement of the earth around the Sun, it has a connection with source. It is the act of presencing within the moment.  Ohm vibrates at 136.10 Hz, which is close to the note C#.

The Sun brings the light of day, warmth, and yang to the matters at hand. The frequency for the Sun vibrates at a lower octave of the speed of light, at 126.22 Hz, which is close to the pitch of B. Vibrations at the speed of light resonate close to the ‘event horizon’ where reality can fold into a black hole. Thus, existential matters of being and nonbeing are part and parcel of the Sun vibration. 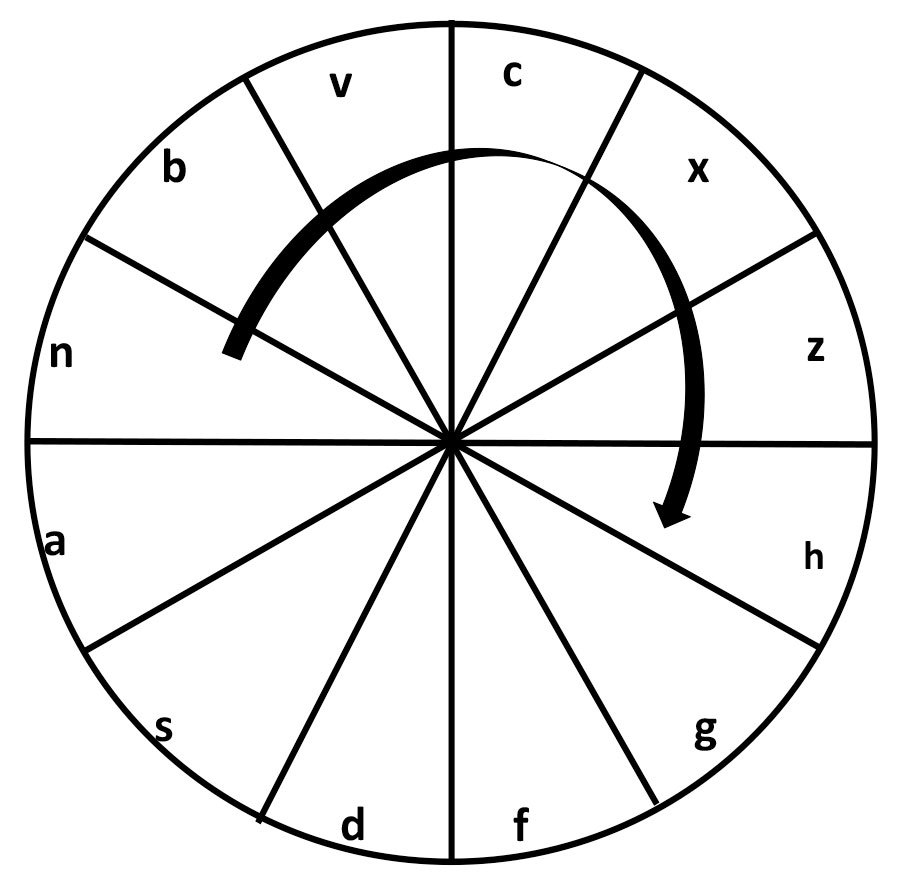 Movement of the equinoctial precession: Image from Cycles in Medical Astrology (2)

Specifics of this Solstice

After the general principles of the fork for a season, Ohm, Sun and Zodiac, specific planetary influences based on the chart calculated for the exact movement of the Sun across 0’ 00’ at the tropic of Cancer. The chart for the 2019 Summer solstice is calculated for June 21, 2019, at 11:54am in Washington, DC. (see Figure 3)

Figure 3: The chart for the 2019 Summer Solstice 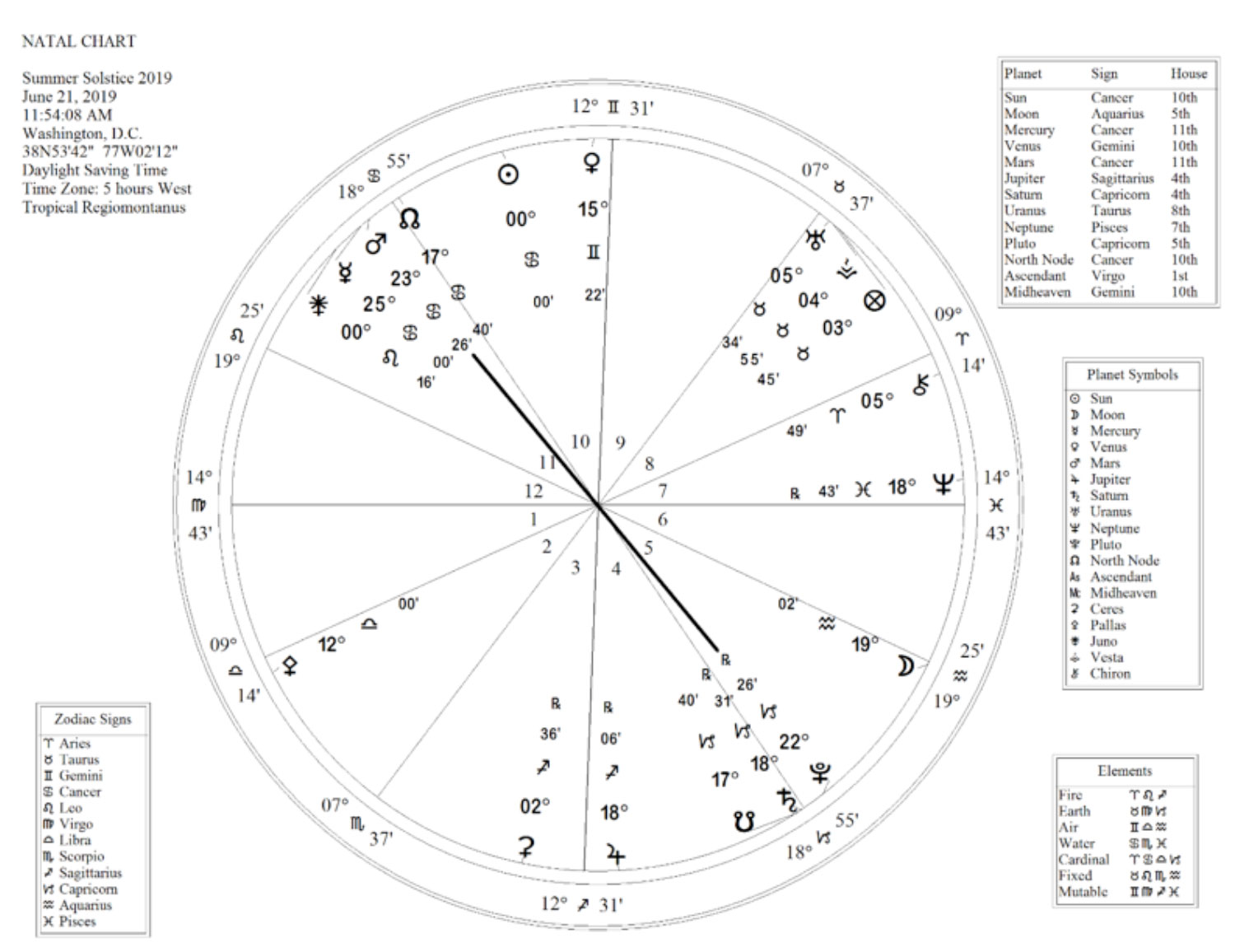 Notice the placement of Mars directly opposite that of Pluto. This is an aspect ripe for conflict on the downside.  On the upside, there can be powerful compulsions to act on matters of mission and purpose. In either circumstance, we can use Pluto and Mars forks to treat the resonant frequencies of the two planets based on sympathies between the planets and the experience.

Making the chart like local space (3), the Sun is in the south, Mars, also, but slightly east. Saturn and Pluto are in the North-North-West sector. I bring Saturn forward as he is close enough to Pluto there in Capricorn to require attention. Remember – even Saturn needs to be loved!

Thus, we can use the following forks for this summer season, capturing the planetary vibrations for the season, and transforming them into useful, healing forces in a world that are in need.

In this article, we have explored the forks relevant to the solstices and equinoxes as a general principle. We have examined the forks that are relevant to each season, and the particulars of the chart for the 2019 summer solstice were addressed. May this missive empower you in your work as a healer and agent of vibrational transformation in the world.

Will Morris works at the Kootenay Sound Healing Center. He has worked at the intersection of sound, astrology, and medicine for more than 40 years. He is available for consultations online and in person. Find upcoming Classes and Events at: https://kootenaysoundhealing.com/calendar/

"My personal experience is that this work takes you back to you. It helps you to remember your core essence, your home tone. I often come away thinking to myself "Oh there I am, I knew I was in there somewhere"