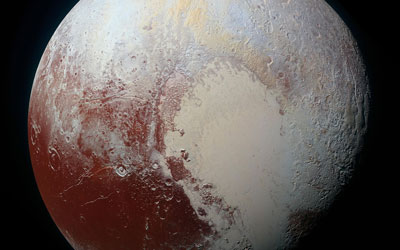 Character of the Planet: Transformation

Intervallic Personality: The Ohm/Pluto microtone is highly dissonant, penetrating deep into the body to break down resistance to change; promotes evolution through the destruction of old forms. Growth and transcendence through conflict. Pluto breaks down the old into its component parts, only to reassemble them on a new higher octave. Pluto rules the raising of Kundalini, the major driving power of this ongoing process.

Anatomical and Physiological Correspondences: External reproductive organs, the prostate gland, the anus and colon, waste expulsion, release of toxins on all levels

Pluto Imbalances: Illnesses of the sexual or eliminative organs, skin conditions with an eruptive nature, deep-rooted illnesses that are slow to surface, deep-rooted emotional and psychological issues 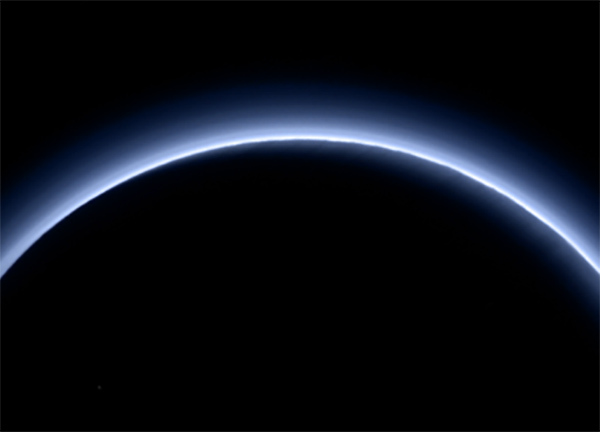 Pluto Science: The ninth planet from the Sun, discovered by Clyde Tombaugh in 1930 was once considered the final frontier on our solar system, but today we recognize it as a gateway to the outer reaches of our solar system. The New Horizons Pluto System flyby, reached Pluto in July of 2015. Since that time, 6.25 gigabytes of data have been sent back to Earth, with the last bits of data reaching Earth on October 25th, 2017. Analysis of this wealth of material reveals a planet of numerous riches, diverse and active geology, exotic surface chemistry, a complex atmosphere, a puzzling interaction with the sun, and an intriguing system of small moons. Among the most striking features is a large heart-shaped feature carved into Pluto’s surface and an exotic bladed terrain of methane ice that was found at the highest altitudes on Pluto's surface near the equator soaring hundreds of feet into the sky. Additionally, high altitude hazes give Pluto’s sky a bright blue tinge.

Pluto’s diverse landscape is likely the result of eons of interaction between highly volatile and mobile methane, nitrogen and carbon monoxide ices as well as inert and sturdy water ice. The variations in surface composition on Pluto are unprecedented in the outer solar system. Age-dating of Pluto’s reveals it has been geologically active for at least 4 billion years. There is also a massive ice plain larger than Texas that is devoid of any detectable craters and is geologically young – no more than 10 million years old. Pluto’s upper atmospheric temperature is much colder (by about 70 degrees Fahrenheit) than had been thought from Earth-based studies.

Pluto’s Small Moons—Styx, Nix, Kerberos and Hydra, discovered between 2005 and 2012, range in diameter from about 25 miles (40 kilometers) for Nix and Hydra to about six miles (10 kilometers) for Styx and Kerberos. The small satellites have highly anomalous rotation rates and uniformly unusual pole orientations, as well as icy surfaces with brightness and colors distinctly different from those of Pluto and Charon. 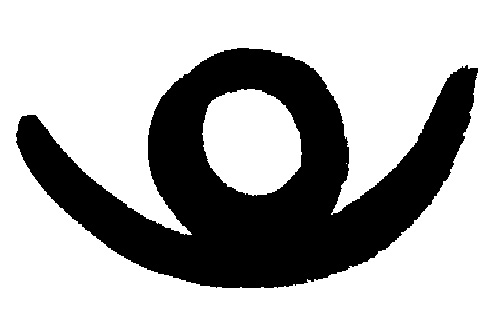 Mythology:  There are many cross-cultural myths that feature the gods of the underworld, including the Roman Pluto, the Greek Hades and Babylonian Nergal. Hades is one of the three ruling sons of Cronus, brother of Zeus, and husband of Persephone. He belongs to the first generation of Olympian gods, who overthrew their father and defeated the Titans. Hades becomes the ruler of the House of Hades, the underworld where souls go after death, to reside as shades or shadows lacking blood or consciousness. He ruled over all things subterranean, including caves, caverns, metals, and gems found deep within the Earth. Pluto was a strict ruler following a clear moral code: people were judged fairly, evil was punished, and goodness was rewarded. The early Greeks feared him and did not speak directly of death; instead a person who had died might be referred to as departed, or blessed, which is perhaps why Hades was also called Pluton, the wealthy or wealth giver. This title most likely refers to the blessings that are received from deep within the Earth, such as minerals and gems. Demeter, Persephone, and Hades are all identified with the rich harvest.

The ever-repeating cycles of life and death, transformation and resurrection can be found in the dissolution and decay of old patterns into fertilizer for our gardens. With the changing seasons, we are able to plant new seeds so that new life can be formed. Our most serious failures can transform into our greatest insights, rising from the dark night of the soul into the creation of a new life. Pluto provides us with gifts that have the potential to animate our soul and to transcend our liminal existence.

Pluto Archetype: Pluto represents the soul or psyche, the shadow and father, all aspects of things that are buried, sexual taboos, fertilization, decay, fiery volcanic eruptions, criminal behavior, and things that lurk deep below the surface, including the unconscious and the collective unconscious. Just as Pluto was not the god of death, this archetype is not necessarily representative of a physical death but can relate to all types of loss, including dismemberment and the loss of memories, hope, and purpose. The shadow aspect of Pluto can also be identified in the time of its discovery. It was 1930, between two wars, the time of the Great Depression, when there had been a tremendous loss of material wealth, resulting in many suicides and providing the perfect fertile ground for a rise in organized crime. World War Two, the splitting of the atom, the creation of the atom bomb in Los Alamos, the Nazi death camps, and the deaths at Hiroshima are all representative of the darker more shadowed aspects of Pluto.

Treatment Suggestions: Although the highly dissonant Ohm/Pluto Microtone is excellent for penetrating deep into the body to promote change the interplanetary intervals that you learn to work with in Acutonics Level IV provide tremendous depth to promote deep transformation and regeneration. 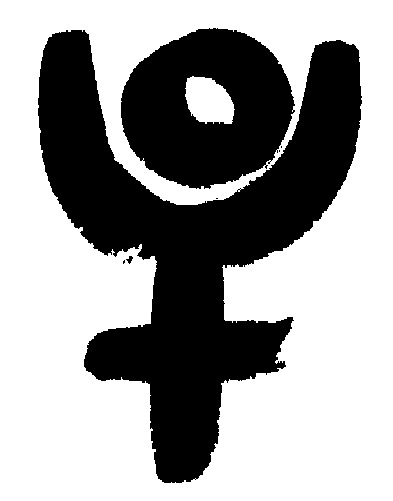 Psycho-Spiritual Issues: Pluto’s energy for destruction, transformation, and regeneration has significant clinical applications. It is through this process of breakdown and reemergence that growth takes place on the personal and transpersonal levels. Through Pluto, we find ourselves placed in situations of conflict that challenge us to face ourselves at our deepest emotional and spiritual levels. Pluto also provides the energy to liberate us from the restrictive hell of problems and obstacles of the past, allowing our spirits to emerge from the depths transformed into higher awareness. It also provides energy to liberate hidden treasures that lay buried within us.

Emotional Pain Associated with Sexual Abuse: To treat the emotional pain associated with sexual abuse, use the Chong Mai Extraordinary Vessel, starting with the Solar 7th Interval to bring light to the issue. Open with the Sun fork on SP 4, Grandparent’s Grandchild and balance with Low Ohm on P 6, Inner Gate. Follow with the Pluto/Mercury Microtone to identify hidden issues, Mercury wakes up deep issues and allows the pain to come to the surface. Place Pluto on SP 4 and Mercury on P 6 for access and to allow the pain to surface. End with the Ohm/Chiron 2nd Interval (Chiron on SP 4 and Ohm on P 6) to promote healing.

Deeply Buried Grief: Pluto allows us to reach deeply to bring out buried grief. Apply the Ohm/Pluto Microtone to LU 3, Heavenly Residence, the Spirit of the Lungs point. Follow with the Ohm/Mercury Microtone for Mercury’s help in communicating the feelings that were buried.

Use Pluto/New Moon on the Three Treasures, DU 20, REN 4 and REN 17 to open up to the wisdom of our ancestors follow with Mercury/New Moon to integrate the messages received.

Addictions: Pluto is also connected with the aspect of addictions that reveals a self-destructive nature. It allows us entry to the shadow self that obscures our true nature. 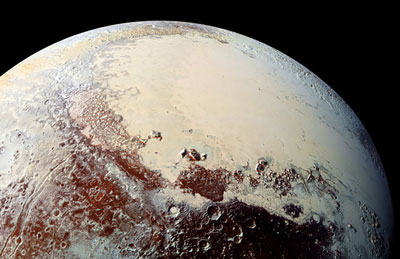 To Transform Self-Destructive Behaviors Associated with Addictions: Use the Ohm/Pluto Microtone on the Chong Mai Extraordinary Vessel. Place Pluto on SP 4, Grandparent’s Grandchild and Ohm on P 6, Inner Gate. Follow with the Pluto/Neptune 5th to access deeply buried emotions associated with addictions and follow with the Pluto/New Moon 5th to release. Complete the sequence with the Ohm/Saturn 2nd to use the restrictive and controlling energy of Saturn (Saturn on SP 4 and Ohm on P 6).

To Uncover Treasures Buried Deep Within: Pluto, the guardian of mines and precious jewel can support the creative journey.  Apply the Ohm/Pluto Microtone on the third chakra to gain deep access to personal power. Follow with the Ohm/Venus 6th to energize creativity, artistic abilities, and passions. Finish with the Ohm/Jupiter 4th to provide expansiveness to these qualities.

Pluto/New Moon 5th provides an opening to help access deep hurts and to break the cycle of victim perpetrator and other patterns of abuse. Use on KID 21, Dark Gate the point where the Kidney and Chong channel meets.

Pluto/Uranus 5th can be used to gain deep access into the meridian to expand vision and open deep blocks. With hidden emotional issues and old abuse patterns open with Pluto/New Moon follow with Pluto/Uranus. GB 37, Bright Light brings light to support the process of transformation.

Pluto/Neptune 5th opens to very deep emotions, Neptune relates to the archetype of the mystic, may be useful for intimacy issues and addictions. A progression of the Full Moon 6th followed by Pluto/Neptune 5th on the Ren Mai for inspiration.