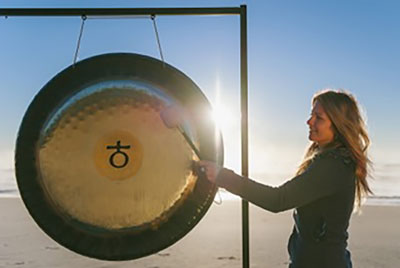 Wow what an incredible month of planetary geometry in the heavens. We have 2 potent eclipses this month (being the 1st set of 2 for the year). The Lunar Eclipse (Penumbral) at the Full Moon (22° Leo) on the 11th of February and the Solar eclipse (Annular) at the New Moon later in the month, February 26th at 8° Pisces. An annular solar eclipse happens when the Moon covers the Sun's center, leaving the Sun's visible outer edges to form a “ring of fire” or annulus around the Moon. The next Annular Solar eclipse will not be until December 2019. I am writing from Byron Bay Australia in the Southern Hemisphere so if you are in the Northern part of the world the eclipses will fall most likely on the date before. Look up your time zone for the exact times to view and sit under these special portals. Eclipses provide a potent time to use your Acutonics tuning forks and I have provided some treatment ideas later in this article.

The next set of eclipses for the year will fall in August, and for those of you in the States, you will have the blessing of experiencing the first visible Total Solar eclipse since 1979!

There are 2 Major themes in this month’s cosmic dance….

Jupiter turns retrograde in Libra on Feb 6th (until June 9th) and offers us a moment to stop and reflect on the inner dynamics of our partnerships, both personal and professional. What is working and what is not working? Are you aware of your partners needs and are you able to meet them without sacrificing your truth (Jupiter)? Mercury is squaring Jupiter so it is important to watch your communications, as the mouth could tend to talk big stuff, without thinking. Hold back on making hasty decisions…reflect and evaluate only. Mercury also moves into Aquarius and forms a more easeful trine later in the month so you can discover unconventional ways to think and problem solve any issues. It will be easy to meet and relate to people.

On the 5th of February Venus enters Aries (joining Mars) and then later in the month conjuncts Uranus (Mars adding some fuel to the Uranus opposition to the retrograde Jupiter in Libra). If you are unattached Venus and Mars in Aries can encourage flirty attractions and short-term flings and romances that make it far to easy to fall head (Mars) over heels in love at first sight. However, be aware that with Neptune’s influence later in the month, this may mean that much of the raw passionate energy you feel, is really your own projection and in actual fact over-romanticised illusions. Jupiter opposite Uranus and Mars greatly increases our need for personal freedom and excitement. You could feel a strong urge to react or rebel against anything that stops you from having fun and doing what you want. So say yes to any sudden events as this will be a great opportunity to release any built up tension and may lead to a major change in circumstances.

In essence with all this Martian/Aries energy it is easy to be concerned with satisfying our own spontaneous needs, however Jupiter on this cardinal axis also stipulates the realization and consideration of the needs of those important to us.

Treatment options to help with these transits: 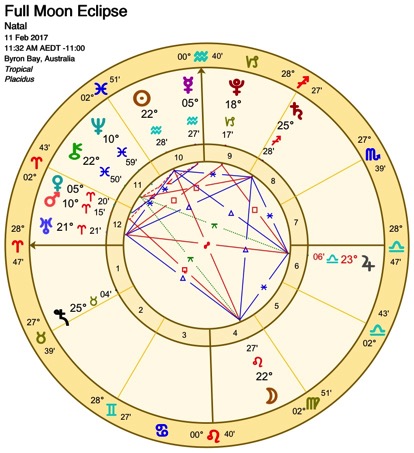 This will be a very charged Full Moon with a Mystic Rectangle and Kite formation occurring in the heavens with the major planets (see chart below). The eclipse will occur around Feb 11th in Leo (Sun in Aquarius) that enhances creativity and originality and so it is important to put your talents to good use. It will be a great time to get out your paints, do some writing, or other creative project to express the inner genius.

The eclipse will be visible in some parts of Europe, Africa, Asia and the Americas. This type of Eclipse causes the moon to only darken slightly when viewed from earth and is one of the less dramatic lunar eclipses.

Try this at the time of the Eclipse:

New Moon 5th, Full moon 6th and New/Full Moon Microtone on The Ren Mai for opening up to what want to be conceived
Ohm/Uranus 5th, Solar 7th and Uranus/Sun on the Du Mai for breakthroughs, path activation/initiation and conscious revolution

The Realm of Neptune

On Feb 18 the Sun enters Pisces. The Planets Mercury and the Moon follows, all joining Neptune and Chiron, to create a Stellium of 5 Planets in this dreamy sign ruled by watery Neptune. If you haven’t set your New Year intentions yet don’t worry. The Gregorian Calender keeps us out of sync. The natural year is the time it takes for the Sun to traverse the 12 signs of the zodiac and it is not in alignment with the natural cycles to start a new year January 1. The start of the astrological New Year begins next month in March when the Sun and the Moon are conjunct Aries (the first sign of the zodiac). Think of this time as the end phase, surrendering and going in to connect with source moment before the new growth and activity occurs.

The end of February is a time to connect with your inner voice, your higher self and spirit. What are your true dreams, visions and aspirations? This is a great time to engage in a more regular spiritual practice. Guidance will come regarding the path to take that is more in alignment with your souls purpose. When the Sun and Moon moves into Aries next month you will be able to put out your years intentions and resolutions with integrity, depth of feeling and genuine commitment.

Do you remember your dreams? They are super powerful and often give us messages and keys. If the Pineal gland (the seat of consciousness) is shut down we will not remember them. The religion of Sound and Light, called Eckankar imparts original teachings of dream work and soul travel. It is said that there is always a living dream master on the physical plain and after that life experience they then ascend to work on other plains helping souls to the light and sound through their dreams. According to their records, Pythagoras and Jesus where living Eck masters. The main technique to profound dreams, soul travel and enlightenment is to chant the tone ‘Hu’ while looking inside to your 3rd eye. So here is a little exercise… 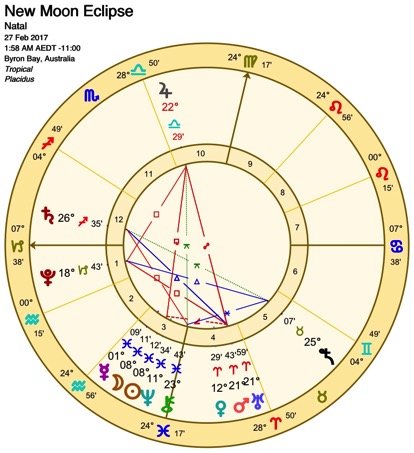 The 8° Pisces Solar eclipse on Feb 26th is the companion to the February 2017 lunar eclipse. The spiritual nature of the solar eclipse (being in Pisces with so many planets charging it) blends perfectly with the mystical lunar eclipse. The many talents provided by the previous lunar eclipse can now be put to use following inspiration from your hopes and dreams. Staying true to your dreams brings good fortune in health, wealth, happiness and deeper more connected relationships. Greater sensitivity, visions and premonitions if dedicated to self-development/meditation practices during this period will likely occur.

Some combinations you may choose:

On the morning of Sunday 26 February 2017 the solar eclipse will be visible from South America. It then ends in South-Western Africa at sunset. Being an annular solar eclipse, not all of the Sun will be darkened. In this type of partial eclipse, the apparent diameter of the Moon is smaller than the Sun’s, leaving a ring of fire or annulus around the Moon. ... In an annular eclipse of the Sun, the Moon casts its antumbra - the outer part of the Moon's umbra - on the Earth.

Eeka King was drawn to the study of Astrology at a very early age. In 2000 she undertook training under the well-known Australian Astrologer Maggie Kerr, in Astrological Therapeutic Counselling and in 2007 completed the Astrological Delineation Master Class program with the famous Astrologer Alan Oken and Maggie Kerr. Eeka a registered Chinese Medicine Practitioner for 13 years runs a busy practice near Byron Bay, Australia. As an Acutonics practitioner and teacher she is overjoyed at being able to blend her two passions and recognises she will never stop learning and growing as a beloved scholar in these extensive and expansive fields.

As well as working on her Fertility Master Class (Cosmic Cycles of Conception) and incubating her 3rd child, Eeka is offering the following Acutonics Classes this year in Australia:

"It was a gift to learn from a teacher (Sue Wadden) who has so much knowledge of classical acupuncture. I can now use tuning forks on my patients who prefer not to have needles."