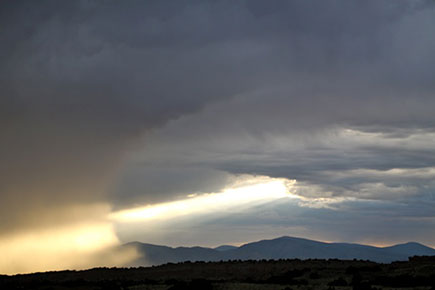 Within, without, throughout. As above, so below. 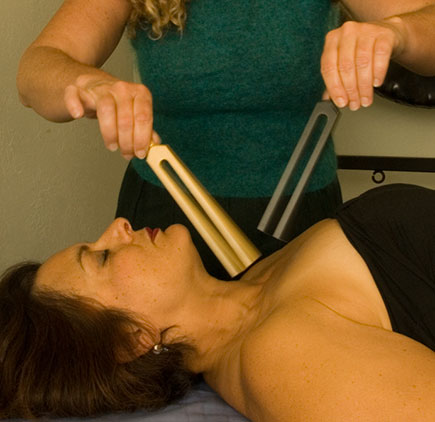 Linking heaven and earth, swirling through the synapses of all humanity, sound is the universal ribbon of life. Honored in the ancient mystery schools where East meets West, revered as the oldest and purest channel of healing, sacred sound is a vital force whose resonant vibration touches eternity.

The celestial symphony of whirling planets—the music of the spheres—is nature’s divine ambiance. As its faraway melodies wash into another watery womb, the next tiny heart finds its rhythm. Long before our first gasp, each one of us is both musically endowed and sound-encoded.

How does a human soul slowly lose the sweetness of this innate harmonic intelligence?

Amid daily noise pollution and the stresses of innumerable distractions, complications, the dark energies of corporate crime and acts of terrorism, disconnection is rampant. What can individuals do to rebalance, rejuvenate, and better protect the energetic muse-ings that heroically try to waft back in for a harmonious landing?

To the casual observer, an Acutonics demonstration resembles a dart game that’s being played horizontally with shiny, rainbow-colored lawn darts. But thankfully, we didn’t spot any casual observers; some classmates were so moved by these heartfelt teachings that they’re now enrolled in their own Acutonics study programs.

Acutonics is headquartered within the Acutonics Institute of Integrative Medicine, LLC in New Mexico and taught year-round throughout the U.S. and beyond. Joining Holistic Times for a tone-ish tribunal are the creative hearts and soul of this sound healing modality. Incidentally, their innovative implements are natural conduits of healing energy, containing no sharp edges and designed to hum in perfect tune with the universe. 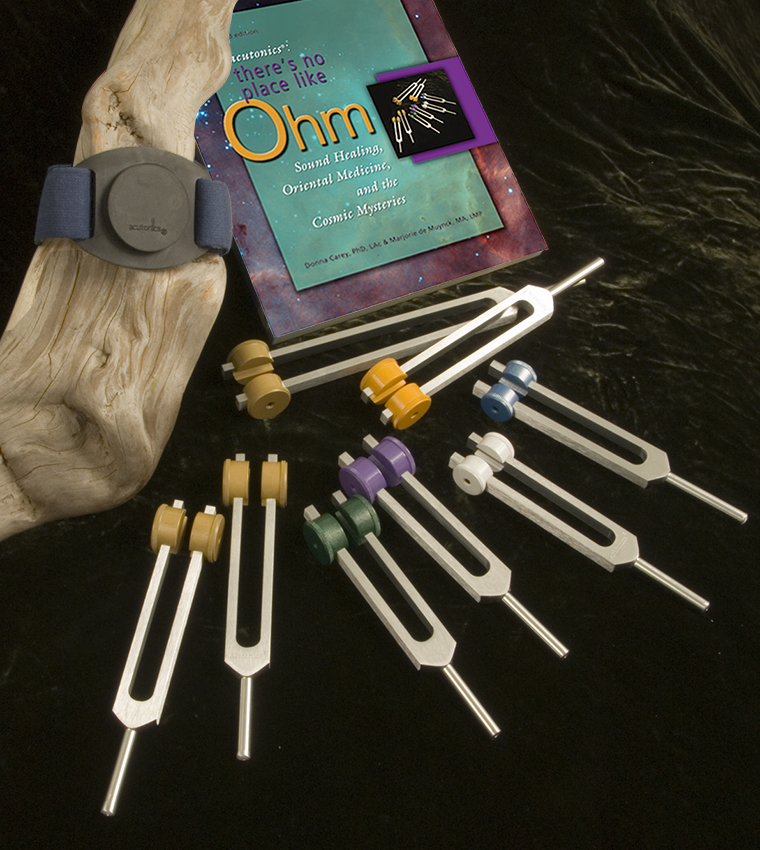 Acutonics is a non-invasive, yet powerful, transformational healing system. Using sound and vibration to re-harmonize and attune the human energy field to achieve optimal health, actualization, and wholeness…

HOLISTIC TIMES: How did each of you discover sound healing?

ELLEN FRANKLIN: I admit to being quite skeptical, but also in need of relief from asthma. I didn’t want to keep taking steroids, but was treated dismissively when I asked about the natural options. With Acutonics, not only did my breathing improve right away, but the energetic vibration of well-being stayed with me for days. I was amazed to feel free, relieved and alive again—a wonderfully emotional experience.

After three more treatments, there were no more inhalers, no antibiotics, and eventually no more low-grade fear about losing my breath.

DONNA CAREY: Also reluctantly, I was treated by a 90-year old woman whose bright energy was like a pixie or a unicorn—maybe both! While listening to a Brahms requiem, I saw and felt multidimensional light pouring into my solar plexus. It felt like a religious experience. The sensation of perfect unity, with no separation, rolled in on a high, humming energy that sent bright colors everywhere.

Hours later my senses still felt so revved up that my muscles kept twitching and pulsing and vibrating. Friends took me to the E.R. because my blood pressure went off the chart. Interestingly, these odd sensations weren’t one bit alarming to me. I sensed a cosmic reconnection too beautiful for words.

It may have looked like I was having a physical breakdown, but what I experienced was such a high-energy breakthrough that it felt like fire in a bottle. I wanted to help other people “find their music again,” and that’s where we’re going.

HOLISTIC TIMES: How does Acutonics work with different health conditions?

DONNA CAREY: Acutonics is a sound-assisted energy rebalancing modality that was inspired by the workings of acupuncture and acupressure. Using combinations of precision-calibrated tuning forks, these are applied to specific energy points to access the body’s meridian and chakra vibrational systems.

These tuning forks represent a natural harmonic series based on the orbital properties of the Earth, moon, sun and planets. Their rich resonance connects with and supports the body’s natural frequencies.

Following our intake assessment, the client relaxes on a massage table and can remain fully clothed if he or she chooses. The tuning fork is first struck against an Acuvator®, and then placed on the body or held near the ears. The fork’s sound waves

vibrate and travel deeply into the body along energy pathways, affecting human physiology and reaching places not easily accessed by traditional medicine. The body’s watery composition is a sensitive receptor and conductor. 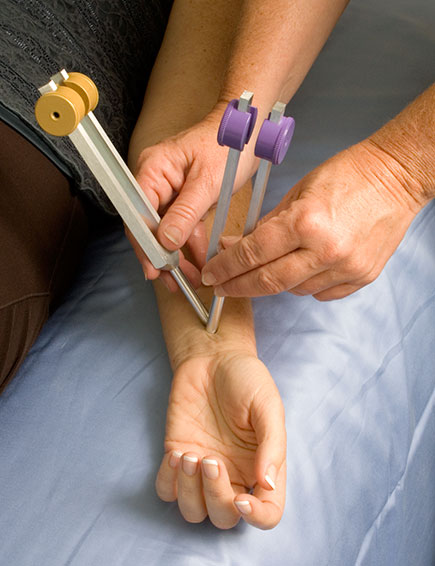 Applying the forks stimulates and balances the body’s physical and subtle energy fields to promote healing and inner harmony. Listening to the forks speaks to us deeply by connecting with our vestibular system, within the inner ear canal, and accessing our sense of motion, balance, space, memory, and healing.

ELLEN FRANKLIN: Acutonics is a non-invasive, yet powerful, transformational healing system. Using sound and vibration to re-harmonize and attune the human energy field to achieve optimal health, actualization and wholeness, it can help address a wide range of ailments: musculoskeletal, neurological, psycho-spiritual, emotional and psychological, gastrointestinal, gynecological, respiratory, and many other chronic and debilitating conditions. We find sound therapy to be particularly soothing and gently strengthening for those whose body systems and defenses have been compromised by the double assault of cancer and oncology treatments.

HOLISTIC TIMES: You established Acutonics and created Acutonics to help other people reclaim their health by choosing saner and less disruptive modalities than medicine. Why do you think we keep having so many bizarre health crises anyway? With all our “progress,” asthma is becoming more prevalent, so many have illnesses such as diabetes, Alzheimer’s, and the cancer statistics are staggering…

ELLEN FRANKLIN: Our planet is in grave danger; the wars without are mere magnifications of the wars within. Emotionally and physically, Earth is the macrocosm and humanity is the microcosm. Within our shared field of consciousness, it’s pretty clear that Gaia is a nervous wreck and very much in need of detoxification—overstimulated by air and water pollution, not to mention the wanton devastation of everything that gives protection…. 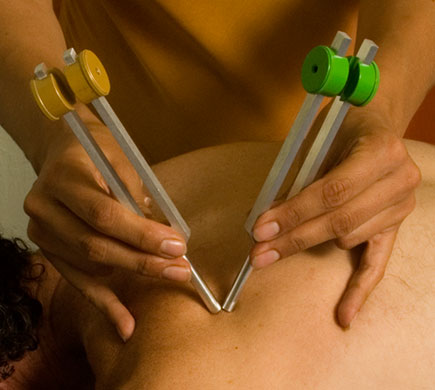 DONNA CAREY: …And that gives humanity protection. So many lung conditions are rooted in grief. Way too many people take anti-depressants; how could we possibly have so many suicidal children?

Autism is a sensory integration illness. We’re so over-stimulated that many children with great gifts and talents are too vulnerable, externally, too sensory-perceptive to cope! So they ‘go inside and stay there’ because the anxiety of keeping all their wits about them, 100% of the time, just wears them out.

Maybe they’re the messengers of new models of education. If the Earth’s energy is being squandered, a lot more will be lost until we commit to finding ways to give children back the sense of protection that’s their birthright. It’s important to educate parents in ways to create energetic balance, nutritionally and with exercises for stress management, talking and journaling, laughing with their kids, and planting a garden.

HOLISTIC TIMES: This reminds me to ask, how did the two of you discover the teachings of Clayton College?

ELLEN FRANKLIN: Our Kairos faculty would see your school’s faculty members at various holistic health conferences and trade shows, and there was always an openness and friendliness, just a feeling of kinship and goodwill that we noticed and appreciated.

DONNA CAREY: We met Linda Powell years ago, and things really clicked from the first time we said “hello.” At the time she was excited about CCNH having recently hosted one of its conferences and her energy was absolutely infectious.

We started trading ideas, having a chat about “best practices” and future strategies. I guess she asked if we would come teach at your next conference because of the instant chemistry. It always felt like we were like three little kids who couldn’t stop talking. We felt like peas that had met our pod!

DONNA CAREY: (Laughs) You won’t usually see me at many other conferences! Ellen is our “public face.” It takes a lot to convince me to travel. But I will say that when CCNH invited both of us to come and speak, I wouldn’t have missed it for anything!

ELLEN FRANKLIN: There’s a camaraderie in your group that’s really fun and refreshing. For example, if you’re hosting a conference it’s one thing to have an open mic night so that everybody who wants to can participate. But with your people, even hours after the official events were over, no one seemed ready to call it night. Little groups would sing and dance, play guitars, start a drumming circle, or just talk and laugh forever. Your students and faculty kept making impromptu plans with each other for where to meet next time. (Laughs) I mean, this went on for days!

DONNA CAREY: Impromptu. That reminds me of one more thing. We love that your conference is on Earth Day, and we were excited to hear about the special presentations that night. Linda knew that we had just returned from an expedition to Antarctica. I had written poetry, Ellen had these breath-taking photos, and Linda invited us to share the spotlight, so Ellen gave a narrative on global climate change. It was a very special honor for us, a wonderful evening that we’ll never forget.

HOLISTIC TIMES: You’ve been involved with public health service for many years. Are you training Acutonics practitioners to go work in disaster areas?

ELLEN FRANKLIN: Over the years we’ve donated products and helped create the infrastructure for volunteer networks so that our grads could focus on training medical professionals in the cost-effective alternative of sound healing—in Tibet, India, and South America so far.

These are people who already know acupuncture but have been unable to get enough supplies. While serving as clinical dean at Northwest Institute of Acupuncture and Oriental Medicine, Donna established more than a dozen community clinic programs for grossly under-served low income groups—for elderly residents in public housing, inmates, homeless people with HIV/AIDS, refugees and immigrants.

DONNA CAREY: We care about the world. We care about building a community of care that expands the envelope. Stress is the number one issue that causes ill health. If we can’t change a whole lot, still we can help people see that, together, we can each change something.

Earth is the macrocosm and humanity is the microcosm. Within our shared field of consciousness, it’s pretty clear that Gaia is a nervous wreck and very much in need of detoxification.

"One of the most amazing things that transpired since doing Acutonics is that my hot flashes have completely gone away! Not only do I feel better and look better, but life without hot flashes is fantastic! "