During the next two months, there are heightened Neptunian themes propelled by the once in a lifetime Neptune-Jupiter conjunct in its home sign of Pisces. This article explores the important transits during this time, drawing upon an ancient Japanese Folk Tale to help you grasp the slippery nature of Pisces themes, and offers a treatment protocol as support during the coming Neptunian fog. 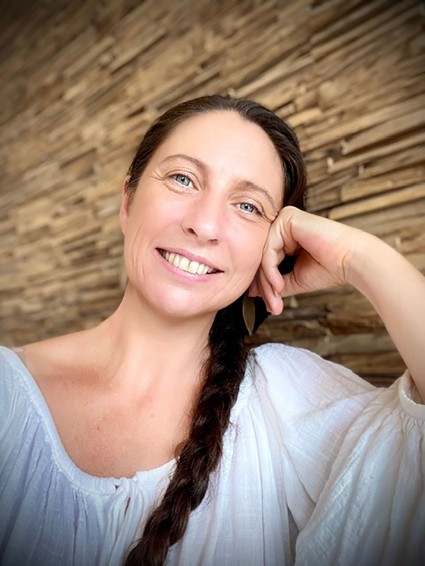 Currently, the two rulers of Pisces are domicile, meaning they are in their home sign. This transit is quite rare as it takes Neptune 164 years, and Jupiter 12 years, to move through the zodiac. The two have not been in Pisces together since March 1856, making this a once in a lifetime transit.

The actual conjunct will be at 23 degrees Pisces 58 arc minutes on the 12th of April 23:22 AEDT. Jupiter and Neptune will not meet in Pisces again until February 12th, 2342. Learning what this transit may be activating in your client’s natal horoscope will give you great insight into the most relevant archetypes and treatment approaches. For example, the house where the conjunct is seated determines the area of life Neptune’s qualities of elusiveness, grief, and illusions, will be experienced.

If you have more experience reading charts, you may like to include aspects to the conjunct. For example, the natal position of Venus is square to the conjunct of Neptune and Jupiter. Now we know Venus’s themes are important and can be included in the treatment. An example of this kind of activation could possibly indicate an experience of unveiling, or disillusionment, in their relationship, about their self-worth or perhaps with their investments and resources.

In addition to this major transit, we also have the following: 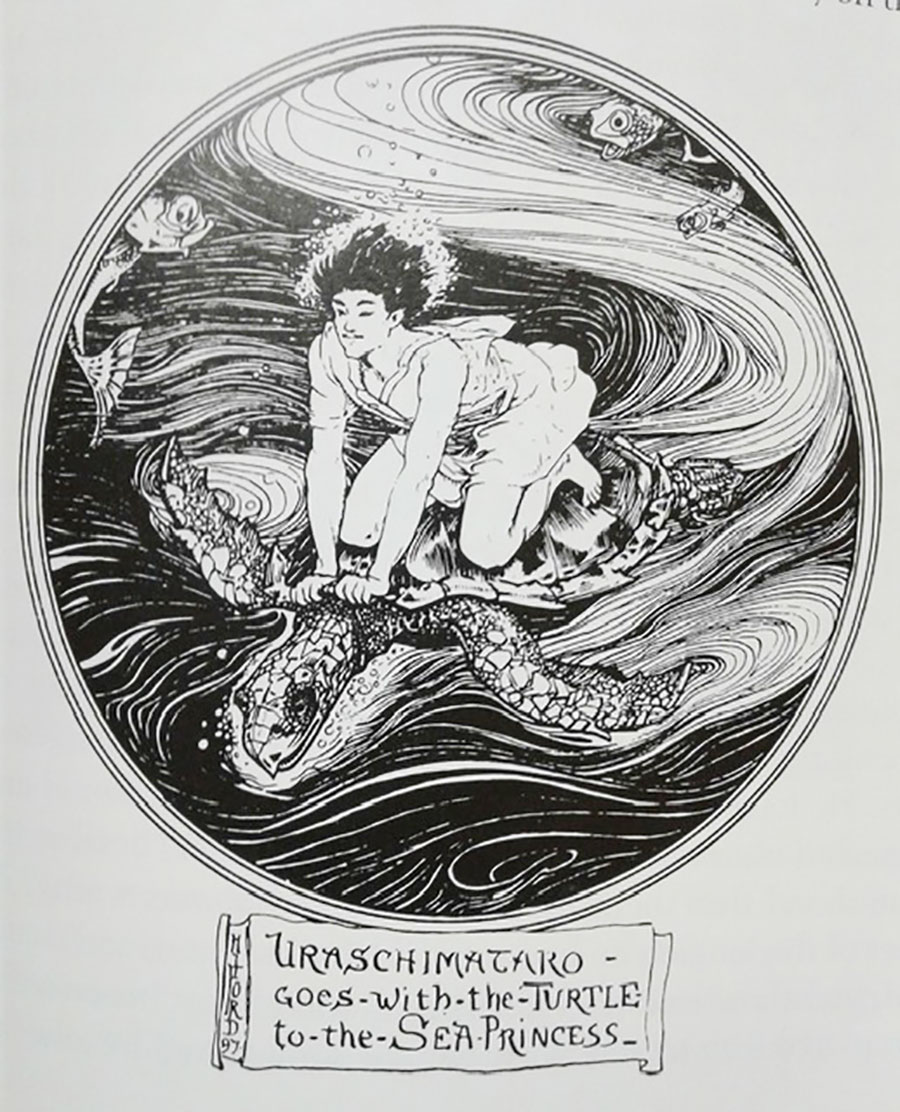 By the time Mars meets with Neptune in Pisces May 18th, Venus and Jupiter have already left Pisces and entered Aries. Thereby, dissolving the overwhelm of the Pisces archetype by mid-May. Now that we have the key transits and dates, let’s consider archetypes that are influential through an 8th Century Japanese Folk Tale called Urashima Taro and the Turtle.

Urashima Taro and the Turtle
Urashima Taro and the Turtle sets a strong Pisces tone and provides a beautiful framework to support your understanding of the analysis and treatment provided here. A link to a dreamy and melancholic video of the story, found on YouTube is provided below as well as a full text translation of the myth. Below is a very abbreviated retelling of this Japanese Fairy Tale.

Long ago in the province of Japan in the fishing village of Mizu-no-ye lived a young fisherman named, Urashima Taro who was known for his kind heart and gentle nature. Returning from a day at sea, he sees young boys tormenting a turtle, and devises a plan to rescue it. Once the boys release the turtle, Urashima takes great care to gently return it to the water.

The following day, he dreamily sets out in his boat and the world around him seems shrouded in a soft and tender haze as he travels far greater distances than usual, he feels happy. As his boat rocks gently in the water he cannot help wishing that he had a life span life the turtle, thousands of years rather than the short life of a human. Hearing his name called, so far out to sea, Urashima is quite startled to discover that it is the very turtle he rescued the day before.

The turtle asks Urashima if he has ever travelled to the Rin Gin the Palace of the Dragon King of the Sea. He would of course love to see it, but as a mortal he knows that he cannot travel beneath the sea. Expanding to accommodate Urashima the turtle sets off at a leisurely pace until they reach the gate of Rin Gin Palace where he is warmly welcomed for his kindness to the sea turtle. Urashima is led to the inner palace where he is met and warmly welcomed by a beautiful Princess, robed in rich garments reminiscent of the sea, with a voice like music over water. Lost in wonder at where he finds himself, he is led to the place of honor at a banquet table, where the Princess reveals to Urashima Taro that she is the turtle that he rescued, and she owes his very life to him. She invites him to remain with her under the sea in the land of eternal youth, where there are no sorrows and summer never dies. Bestowed with unimaginable gifts, Urashima treated like a prince of the sea, weds the Princess and is shown all the wonders and beauty of the sea kingdom. 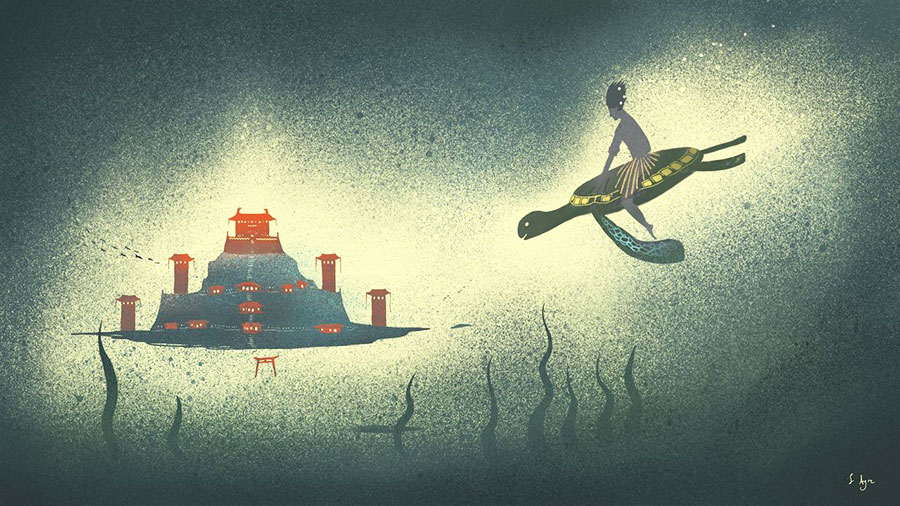 Urashima, experiences great joys and many wonders, his happiness so complete he has no sense of time or his life before. Believing that just three days have passed in this glorious land, Urashima remembers his duty to his family and his parents and begs the princess to let him go for one day, promising to come back. Reluctantly the Princess agrees to let him go, she provides him with a Box of the Jewel Hand and makes him promise that he will never open the box, for if he does, something terrible will happen. The Princess takes the form of a tortoise and brings him to the shore near his home, which looks familiar, but nothing else appears the same. Feeling uneasy, he rushes to the home of his parents but is greeted by a stranger who looks intently at Urashima when he introduces himself and asks after his parents. The stranger laughs, Urashima Taro did live in this village he states, but that is a story from three-hundred years ago. Urashima felt mocked, but the man persisted in his narrative, and Urashima came to realize through his puzzled bewilderment that everything around him was different. He realized he must get back to his beautiful wife. He returns to the beach remembering the box presented to him by the Princess, feeling he had lost everything he disregards her demand that he not open the box, defying his wife of the sea, as he opens the box a purple cloud rises, and he transforms quickly from a beautiful handsome youth of twenty-four to a very, very old man, and falls down dead upon the beach. Because he was disobedient, he can never return to the lovely Princess beyond the sea.

The Story of Urashima Taro, The Fisher Lad, https://etc.usf.edu/lit2go/72/japanese-fairy-tales/4881/the-story-of-urashima-taro-the-fisher-lad/

Let’s focus on the three most relevant Pisces Archetypes demonstrated in this story.

1. Naivety
If we perceive the world as a child, we may think that good deeds such as freeing a captured turtle, always deserve a reward. However, life experience quickly shows us that justice does not always prevail. A more mature perspective is that a good deed is offered as a gift, without the expectation of a return.

Neptune transits requires that we remove our rose-colored glasses so we can more clearly perceive the truth, albeit often harsh with feelings of grief and motivating actions of redemption.

2. Bliss to Bereavement
The Pisces archetype can quickly swing from that of being blissfully sweet, to the suffering of intoxication and bereavement. Urashima Taro marvels at the under-sea beings, he is bedazzled by the shimmering gold and silver palace, and once inside, in awe of the magnificent halls, he feels joy and loses track of time. He meets the Princess which further drowns his discernment in a sea of bliss. Towards the end of the story, Urashima Taro hoped that by opening the jeweled box from the Princess, all will return to normal, and his disillusionment would be resolved. This was not the case, and he perished.

The Neptunian transit drives home the point that not all that shimmers and sparkles is of value.  In fact, it may lead us like fools directly away from our true purpose. The feeling of disillusionment will be a painful revealer.

3. Escapism
Naivety, chasing bliss, and escapism are characteristics of the Eternal Child archetype. Peter Pan never wanted to grow up and face the responsibilities of adulthood. Urashima Taro was taken by the Princess and the comfortable life of royalty, beauty, and youth that accompanied her promise. Even though he intended to go home (soul integration), he was bedazzled by the glitz and glam of the material world which completely undermined the purpose of his physical existence.

We are afforded a plethora of means to escape from our true path in this modern-day.  Urashima Taro lost 300 years without awareness.  Many people that we treat are not conscious of the distractions that they allow into their lives which disperses their life energy.

It is important to not lose the child archetype in the world of the mundane. The child holds many qualities such as imagination, inspiration, and wonderment. We must learn to navigate our inner child regularly and in short bursts. Daily connection with the qualities of the child is paramount for healing and connection to our joy. However, we are not to stay in this dreamy domain too long.  We are at risk of getting lost in the mystical world of Never Neverland and may just forget why we have incarnated.

This treatment is to support people in a Neptunian fog of confusion, illusions, escapism, or naivety. We can clear the clouds by using the archetypes of the mutable cross.

Synthesis of spiritual issues. Clear the brain/lack of grounding.

DU 20: Ohm/Mercury layering. To clear the brain and bring in some logical thinking. In the event of confusion, use the Solar 7th to clear the damp on DU 20 and SP 9.

Yin Tang with Jupiter, the ruler of Sagittarius. This enables a capacity to see the unseen with intuition and discernment based on natural lore. Mercury on DU 20 and the DU MAI to activate logical thought. However, some decisions cannot be made from intellect alone and hence we sometimes use Neptune and blindly trust that God will lead us, the Jupiter energy will have us looking for the Truth over blind faith.

If inspiration, imagination, and connection is needed, layer Neptune on extra point Yin Tang and DU 16 to the mouth of God to activate the pineal gland and evoke dream recall. This can be supportive by drawing inspiration and guidance from deep within the recesses of the subconscious mind, the land of Neptune. In addition, apply the high-frequency Ohm/Neptune tuning forks in the auric field with the sacred geometry of the infinity symbol.

Dr. Vanessa Strauss a Registered Dr of TCM is from Queensland, Australia. She is an Acutonics Integrative Medicine Practitioner, an Evolutionary Astrological Counsellor, and a Senior Kundalini Yoga Teacher.  She is available for Astrological Counselling at Vanessa@centreforlife.com.au and can be found on Instagram: vanessa_strauss_astrology, and Facebook as Venessa Strauss.