Both Mars and Venus have ties to Spring, agriculture, vibrant impulses and the great vitality that presents when seeds push through the fertile Earth, a promise of hope, and creative inspiration. A year into a global pandemic, the loss of hope, loneliness and despair are very real. Although many of us have experienced trauma, there is also new life upwelling in this season of Spring when we are in the Element of Wood, we may even feel playful. When the Wood Element is in balance there is dynamic vitality as energy flows freely and we are inspired to move forward with renewed hope, purpose and intention. When out of balance there may be anger or frustration, which can be amplified by lock-down fever.

In early Spring we are in the sign of Aries, ruled by Mars. In later spring we are in the sign of Taurus ruled by Venus. Together in Acutonics they create the Mars/Venus 5th, an opening or gateway to inspiration and creation. This dynamic duo resides on either side of Earth, our home planet. When these powerful planetary forces are out of balance there may be feelings of being caught in the crossfires, a dynamic tension or struggle. This has been more pervasive as we are transitioning from the age of Pisces into the age of Aquarius. There is a desire to hold onto old outworn forms, this could not be more boldly illustrated than the attempts here in the US to suppress the vote. These emboldened racist actions, devised to hold onto power, make it harder for people of color to vote, or have a voice, and without questions threaten democracy.

Mars and Venus together represent a vibrant dualistic relationship represented in an axial pole where yin and yang have both a dynamic and a static aspect. Ares is identified with dynamic yang, aggressive, combative, and self-assertive, and Aphrodite as dynamic yin, the embodiment of Eros—primarily concerned with relating to the male in a deeply active and personal way, not simply taking the more socially acceptable role of wife and mother. Hygiea, the newest member of our celestial family could not have come to us at a more important time, as her role is to elevate and deescalate and to aid us in finding and living at our fullest potential. In this post we explore how she elevates both Mars and Venus to aid us in this challenging time.

Mars
The fiery red planet Mars derives its name from the Roman god of war and is associated with spring, fertility, growth, and the natural world. Mars represents power, passion, drive, and determination. This is not a subtle or gentle archetype. It symbolizes aggression, virility, and the will to get things done through brute force alone. This is the soldier ready and willing to take up arms, regardless of the consequences, impetuous, emotional, and zealous, quick to strike out against his foes, he leaves destruction and devastation in his wake. There is nothing more primal than the will to survive and the desire to achieve regardless of the cost. This combatant spirit has pervaded the human psyche for thousands of years.

When Mars is well balanced we are able to claim our power, have clarity and the ability to identify our true purpose. It is possible to be both tough and realistic, identify and fulfill our destiny, define and achieve goals, and gain recognition for our successes. On an intellectual level, this archetype helps us to evaluate many possible paths and know which one to choose. We are able to move forward without fear, to speak our truth without anger and know how to stand for what we believe, refusing to accept less than we deserve. We have willpower and a desire to experience life fully.

Hygiea/Mars: Hygiea supports Mars in letting go of toxic masculinity to connect to higher levels of passion, initiative and willpower to get important things done, to define and achieve goals and to identify our true purpose. The combatant spirit of humanity as expressed through Mars, finds the fuel or fertilization that humanity needs right now to survive and thrive. Hygiea also helps Mars to remember his original articulation, as a fertility god, this aspect has the potential to bring life-saving cultivation to the planet and to be a positive spiritual warrior.

There is still an urgency to take on important causes, but rather than the head strong warrior, when guided by Hygiea Mars might take on issues of social justice, fight for the environment, or pursue other causes that benefit humanity. There is clarity of purpose and recognition that true growth arises from doing deep inner work so that we are able to engage in the important outer work. The Hygiea/Mars duo helps us to raise our immune system to resonate with viruses and pathogens and bring them into right relationship. Self-first, ego consciousness and winning, gets elevated to all of us wining with strengthened musculature, a healthy immune system and the ability to harness passion so that anger is not the leading force. It is through clear-headed, passion we are able to mobilize with new-found vitality that focuses on the survival of the planet.

One aspect of Mars is that it relates to disharmonies of the Kidneys and Adrenals considered an aspect of kidney yang activity in East Asian medicine. Kidney yang activity is responsible for the body’s stamina and is affected by Mars because of its ability to produce sustained vigorous action. The adrenals are affected not only by sympathetic nervous system response but also by long-term stress that can lead to extreme adrenal depletion. Adrenal depletion manifests as kidney weakness, which can lead to both decreased immune system function and decreased ability to activate the fight-or-flight response. Hygiea lifts Mars up to support the kidney yang relationship and to aid in harmonizing the sympathetic nervous system, so that issues such as courage, willpower, and initiative can take their highest form. Additionally, the energy of Hygiea with Mars provides an adaptive quality, to more gently support the adrenals. Hygiea/Mars might also be used to vitalize blood on all levels, use this interval on SP 6 and UB 17. Also consider using the Chong Mai Vessel, with Earth Day 5th, Mars/Earth Day and the Hygiea/Mars intervals.

Venus
The planet Venus is tied to the archetypal and mythic imagery of Aphrodite a representation of the archetypal feminine. Aphrodite is portrayed as a woman of deep passion. She embodies the archetypal qualities of attraction, pleasure, harmony, sensuality, passion, vulnerability, suffering, creativity, the pursuit of beauty, and Eros. She represents the spiritual longing that is reflected in love of god and the more human aspects of love that are represented in the unfathomable human yearning to find our true partner in life, our soul mate. She is associated with qualities such as affection, appreciation, devotion, the need to be desired, to be in relationship, she seeks harmony and balance, love and beauty. There is an aspect of creative aesthetics, connection with the arts, the yin aspect of sexuality, sensuality and sense of values and taste.

Although primarily identified as the goddess of love, Aphrodite has a powerful warlike strength not unlike Innana, the goddess of love and war. She relates to the divine feminine and similar to the other female deities is described with a dualistic nature. She represents yearning and spiritual longing, chaos and divine and earthly love. This human urge to fuse divine and earthly love within our bodies, soul, and cells is often ignored or disparaged.

Aphrodite’s qualities were not embraced by the later religions, where conflicting views of women as Madonna, mother, and whore become characteristic of the Middle Eastern religions, Christianity, Islam, and Judaism in their attitudes about women and women’s sexuality. Not only do we begin to see the subjugation of the great goddess, and women’s culture, but the Mother is more commonly described as deeply dualistic, while her life-giving qualities are acknowledged she is also evil and devouring. In the texts Aphrodite is regarded as the feminine embodiment of desire, the lure of physical beauty, which may be perceived as a lethal weapon or an evolutionary imperative toward reproductive viability.

Hygiea/Venus: Hygiea helps Venus both in her planetary rulership of Taurus and Libra to transcend the negative aspects of her character. She recognizes that she is much more than a beauty goddess she embodies mitochondrial Eve, creative action and movement toward a sexually equal and gender balanced society. She strives for a civilization that has balanced scales of justice, and equal pay for equal work. There is genuine acceptance of all races and genders across the continuum, from straight to intersexual, or however people choose to self-define. There is increased awareness of the feminine power of nourishment and the importance of spiritual development that embodies the generative aspect of birthing a true merging of mind, heart and spirit. With Hygiea the feminine psyche need not be locked in a dualistic battle or be shattered for speaking truth to power. She invokes a genuine capacity to transform trauma, fight for justice, and helps women find their authentic voices so that they are able to achieve wholeness. There is newfound ability to recognize what we most desire in our lives and how to creatively access it.

As you consider clinical applications remember that Venus governs the Kidneys and Bladder. She influences water-distribution and metabolizing functions of these organs. In East Asian Medicine the kidneys relate to the reproductive and generative function, as well as our essence, heritage, destiny and creation itself. The Ren Mai (Conception) and Chong Mai (Penetrating) are two vessels that could be used to support all types of creation. A progression of Ohm/Venus, Mars/Venus and Hygiea/Venus could be used to strengthen the Kidney energy. Hygiea/Venus might also be used on UB 23, to accesses all levels of Kidney energy and on KID 3, the source point of the Kidney, which connects us to Source through the spirit of the Kidney (Zhi) and allows connection to our will to realize our true destiny. Additionally, Venus rules the throat, and Hygiea/Venus could be used over the Window to the Sky Points, as well as the 5th Chakra, to aid people in speaking their truth. 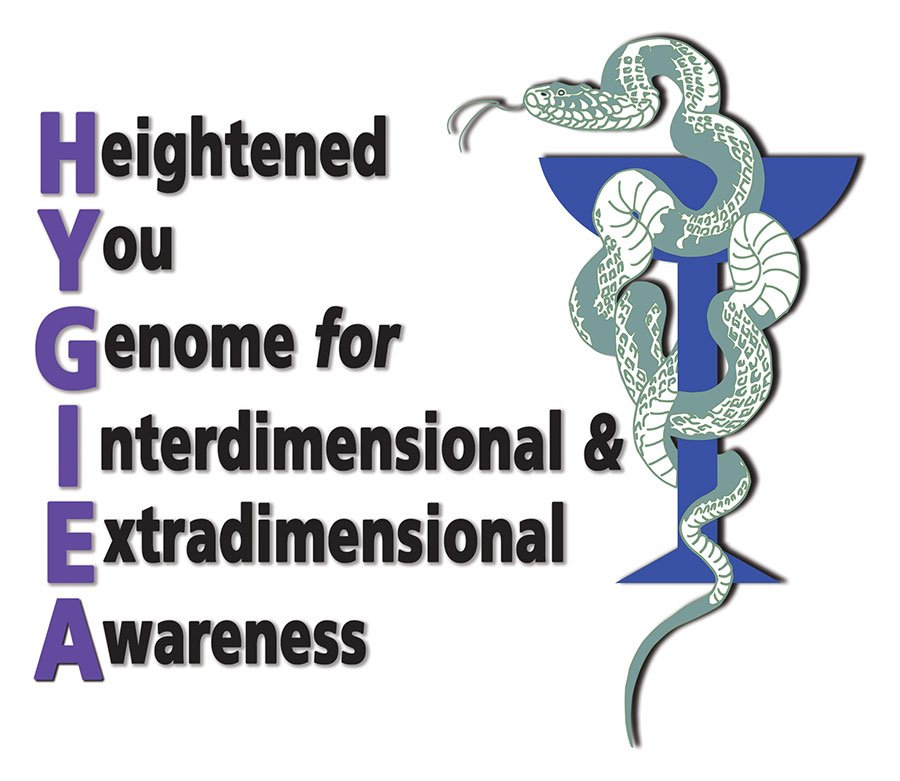 As we think about Hygiea in the context of the other planetary archetypes she is a prime example of the way in which archetypes go through a continual rebirthing process to remain a part of our conscious lived experience. Hygiea invites us to explore old forms, have they worn out? What are the new richer motifs that are formed so that the archetype is able to connect to more contemporary and perhaps richer consciousness? Hygiea reminds us that we have everything we need within us to find our higher purpose, our true soul’s journey, and that genuine spiritual transformation is possible.

Hygiea: Holism and Expanded Consciousness a new Acutonics Class developed by Donna Carey, Ellen Franklin, Joanie Solaini and Jude Ponton, is being offered by Acutonics senior faculty. Check out the website to find an upcoming class.