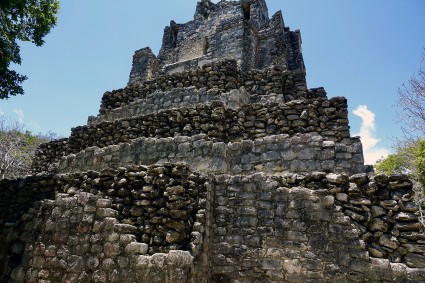 “The human venture depends absolutely on this quality of awe and reverence and joy in the Earth and all that lives and grows upon the Earth. As soon as we isolate ourselves from these currents of life and from the profound mood that these engender within us, then our basic life-satisfactions are diminished.” — Thomas Berry, “The Dynamics of the Future,” in The Great Work, 166. 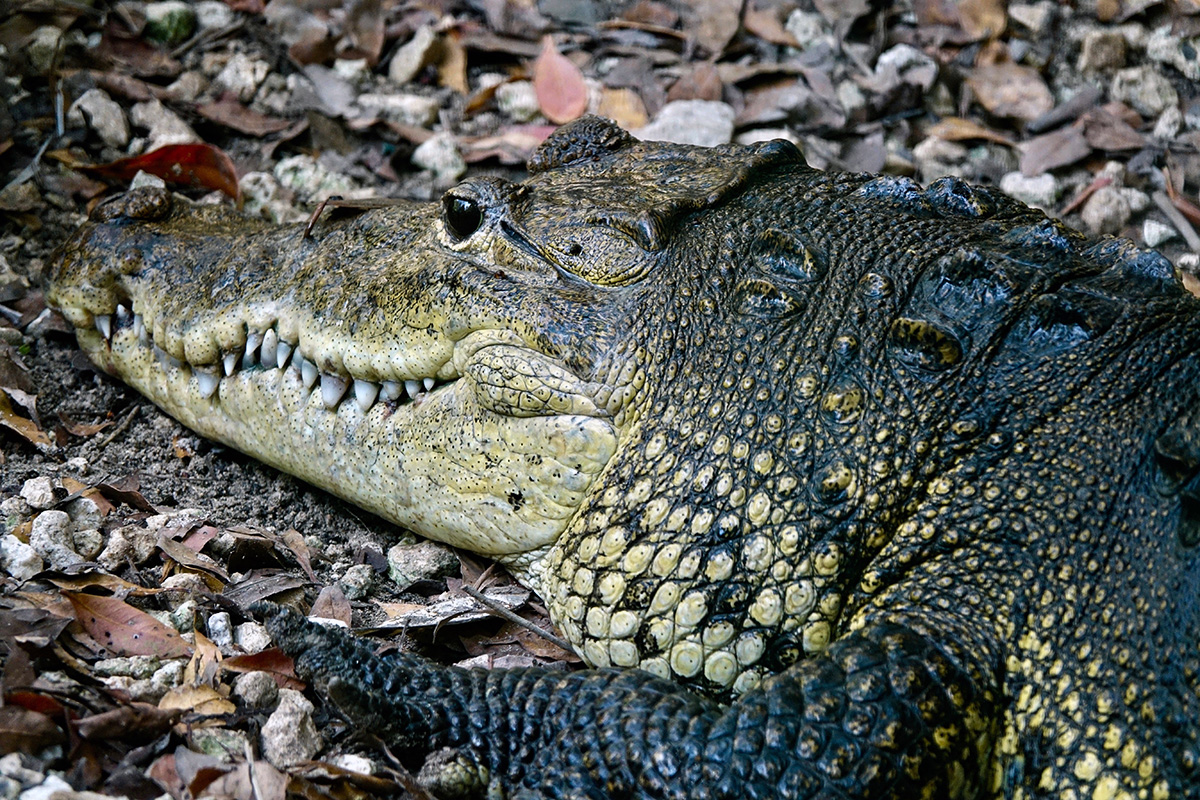 Each year on April 22 we honor the founding of the modern day environmental movement in April of 1970, which to this day, nearly 50 years later, provides a voice to both heighten and raise consciousness that the Earth and all living organisms are in trouble. Despite these efforts, we still have climate change deniers a plenty. Efforts to suppress public awareness and concerns for all living organisms, and the environment have been actively rekindled by the current administration in Washington, DC. The path they have chosen is to completely disregard the mission of the Environmental Protection Agency, in favor of special interest groups, who continue to rape the Earth. Despite countless studies and irrefutable research that clearly demonstrates the relationship between pollution, environmental contamination and public health; it appears that we are moving backwards rather than making progress.

Reflect for just a moment on the the Macrocosm and Microcosm everything that happens in our environment is likely mirrored in the human condition. The ecosystem of the Earth is our ecosystem, reflected in the rise in auto immune disease, asthma, diabetes, cancers, etc. Environmental issues must be our issues as health care professionals. All that happens to the Earth is mirrored in the human condition.

First are the direct health effects from contaminants found in the outdoor environment, home and workplace. Second are the adverse effects upon the natural world through damage to plants, animals and ecosystem functions that are vital to healthy systems of agriculture, fishing, wildlife, the natural products industry, tourism and recreation. Human health is inseparable from the health of the natural world. There are also no national boundaries as contaminants pollute soil and water, they are carried to the rivers and seas of the world. There is no question that pollution can be a serious public health hazard and that prevention of pollution will in fact lead to disease prevention.

Additionally, as the planet continues to warm we are experiencing extreme weather, as well as rising sea levels around the globe, the result of glacial melting. There are a growing number of climate change refuges, from islands which no longer have drinking water.

One-day a year cannot possibly provide an adequate focus on the growing demands of the Earth, every-day should be a day in which we engage in some type of action to focus on healing our living planet Earth.

In Acutonics Level I: Sound Gates to Meridian Harmonics, where you learn to work with the frequencies of the Earth, Moon and Sun we often open class with a reading entitled the ReEnchantment, written by Will Ashe Bason, which begins:

And it's up to us
To re-enchant this planet Earth.
We are the elves and the giants
We are the shining ones
Daughters of the Moon
And Sons of the Sun

It is up to each one of us to find a path in which we are able to identify ways to re-enchant ourselves and our planet, to bring harmony, peace and balance to a world that is deeply out of balance.

If you have not studied Sedna yet I encourage you to take this important class in which many of these issues are explored, with a particular focus on the impact environmental change is having in the lives of the arctic people across the entire region. Donna and I will be on a research trip across the Northwest Passage later this year and are preparing ourselves emotionally for what we expect to see in terms of habitat loss, pollution, and displacement of indigenous people.

Incelebration of Earth (and Sande’s birthday) Donna, Sande and I were very fortunate in April to spend time in nature, blessed to experience mother Earths bounty, which is still very present in the Mayan Peninsula of Mexico. From the iguanas and crocodiles, to the Mesoamerica Barrier Reef which is home to more than 500 fish species, 60 coral species, 350 mollusks and marine mammals, algae’s, and seagrasses. Fortunately, there are major efforts underway to protect this valuable marine area that is the largest barrier reef in North America spanning nearly 700 miles of the Caribbean. It touches the coasts of Mexico, Belize, Guatemala and Honduras. Despite the efforts to protect the reef damage is quite visible in some areas, some the result of pollutants, other areas the result of too many tourist groups led by irresponsible operators. One popular destination for tourists on trips to Isla Mujeres, where far too many boats filled with up to one-hundred people, conduct large group snorkeling, which results in a distressed reef. Fortunately, there are places that are being protected and access is limited to small group exploration of the reef. 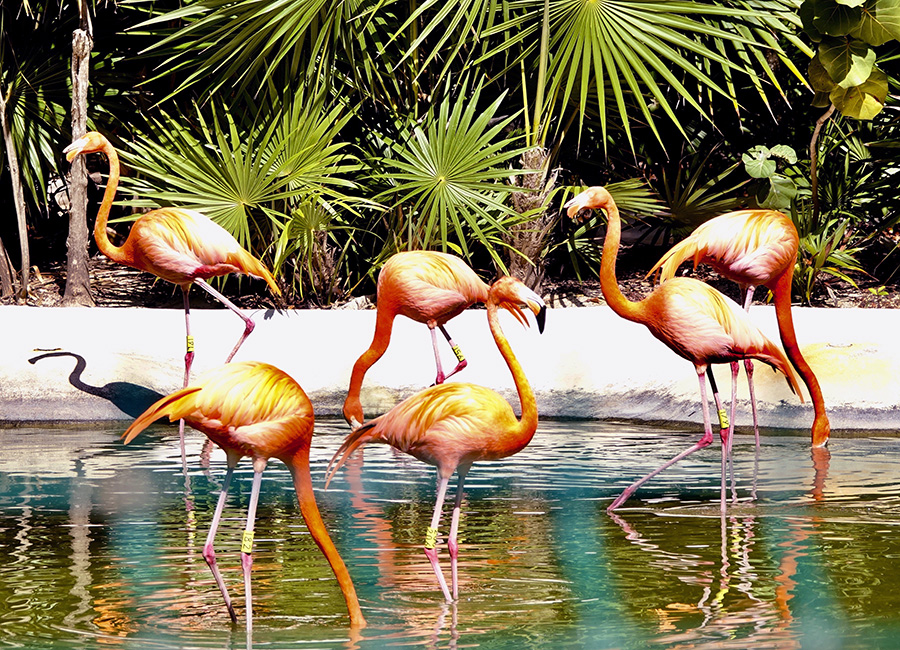 Bird life here is also abundant, there were numerous song birds, Great Blue Herons, pink flamingos and all types of gulls as well as the shrill jungle wake-up call of the chachalaca, which has a very loud call that sounds just like their name. If one bird starts, they all chime in, demanding that you awaken to greet the day. (Our friend John identified them as squawk chickens).

This time in our explorations we visited several hidden gems near Tulum including Muyil or Chunayaxché which is one of the earliest and longest inhabited ancient cites of the Maya located on the eastern coast of the Yucatan Peninsula. Artifacts found here date from as early as 350 BCE. The ruins of Muyil are similar to those found in southern Mayan sites like Tikal in Guatemala. The area of Muyil open to visitors, is adjacent to the Sian Ka’an lagoon, one of the largest open Cenotes, in this part of Mexico, where we were able to swim in the mineral rich fresh waters. This is a part of Mexico that I love returning to every year as our local guide is excellent and helps us find hidden gems that have not become over-run with large tour groups or built up to resemble Disney Land.

We hope that each of you find a way to enjoy and honor the bounty of the natural world.

“Maybe the earth is growing a bit impatient and angry because we have lost our manners, our courtesy, and our gratitude toward her and all the sentient beings that we exploit.”   — Donna Carey

As I was writing this month's blog, Lynn Wedekind who lives and teaches on the Baja Peninsular of Mexico shared this Earth Day ritual with me, which provides a beautiful example of how our Acutonics community of teachers, students and practitioners are finding ways to honor our living planet Earth.

I want to share our April 22 Earth Day Medicine Wheel Ceremony and Plant Exchange that we held here.

The location of our Medicine Wheel is stunning overlooking a natural undeveloped beach and eco-system here in Baja. It is not easy to access, only 4-wheel drive and two sojourners did not make it to the top.  We carpool when we can to conserve gas. We had such a great experience last year with a plant exchange that we decided to share it again this year. Everyone brings a potted plant from their environment to give away and they receive one in return.

I also love incorporating the planetary chimes for the Four directions in the wheel and share the Astrological perspective of the times during ceremony. 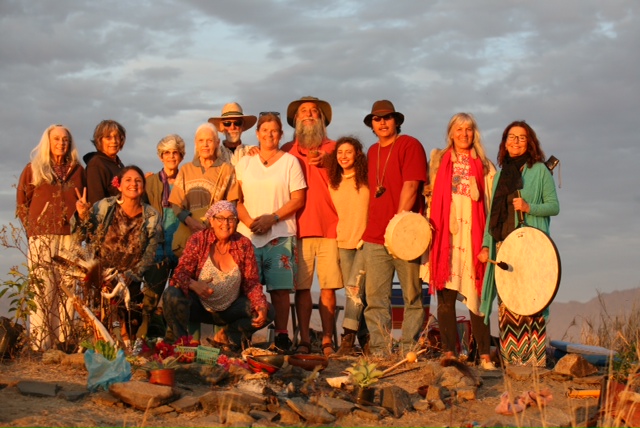 For Mother Earth's Chart, we had the Sun conjunct Uranus in the East, the opening of the wheel. We shared the Sun/Uranus 6th. I consider this the opportune time for humankind being present to change and find inspiration through envisioning what we want to create from the heart. With Uranus representing the higher octave of Mercury, and the East representing the element of the Wind. Perhaps we are being asked to navigate the great winds of change before us with humility.

In the South which represents the sacred deer here, joy, and the element of Fire, we had Pluto conjunct Mars. An opportunity for transforming anything that is not in alignment with our authenticity and taking rightful passionate action to evolve to our highest calling.

In the West, we had Libra, ruled by Venus. West represents the Water, The Great Void and place of Pure Potentiality. We shared Sedna/Venus 7th for the opportunity for us to move forwards in right relationship with self, other, the Earth and our Cosmos from our Divine Awakened Heart Selves.

And towards the North, the place of our Ancestors, the Wu Chi, The Hunab Ku, we had the Moon in Cancer, allowing us access to our intuition and to open to the downloads our Ancestors are offering us for guidance during these transitioning times.

My Indigenous partner reminds me how we must always give something back and I was guided to share milkweed seeds with everyone to germinate and provide food for the Monarch butterflies. As synchronicity might have it, while we were in San Ignacio for our Sedna Whale and Cave Adventure in February, I stumbled upon an interesting seed pod that I brought back with me. I had placed it in a clay bowl on our kitchen counter, wondering what it might be. In several weeks-time, it opened to reveal a fluffy white mystery and hence the journey to learn more about the Monarch's and their amazing migration, which is just as awe inspiring as that of our beloved gray whales.

So for this Year's Earth Day, and throughout the coming year may we all plant seeds, be they the seeds of the Earth or the Seeds of Imagination, Creativity, Wisdom, Harmony and Unity that we are here to grow together with.

Lynn will be offering an Acutonics Level I and II Intensive May 26 - June 3, 2018 in beautiful Todos Santos, Baja California Sur, Mexico. Every class offered by Lynn provides ample time to enjoy the bounty of the natural world. For more information contact Lynn at tuneintuit@gmail.com or call 360-353-4488.