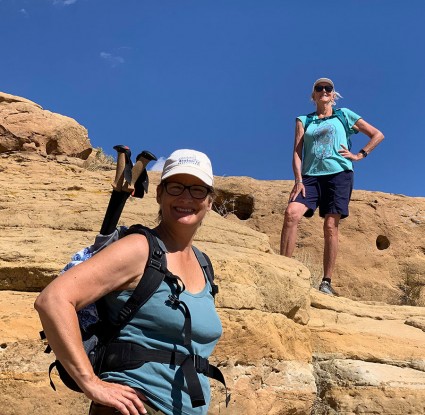 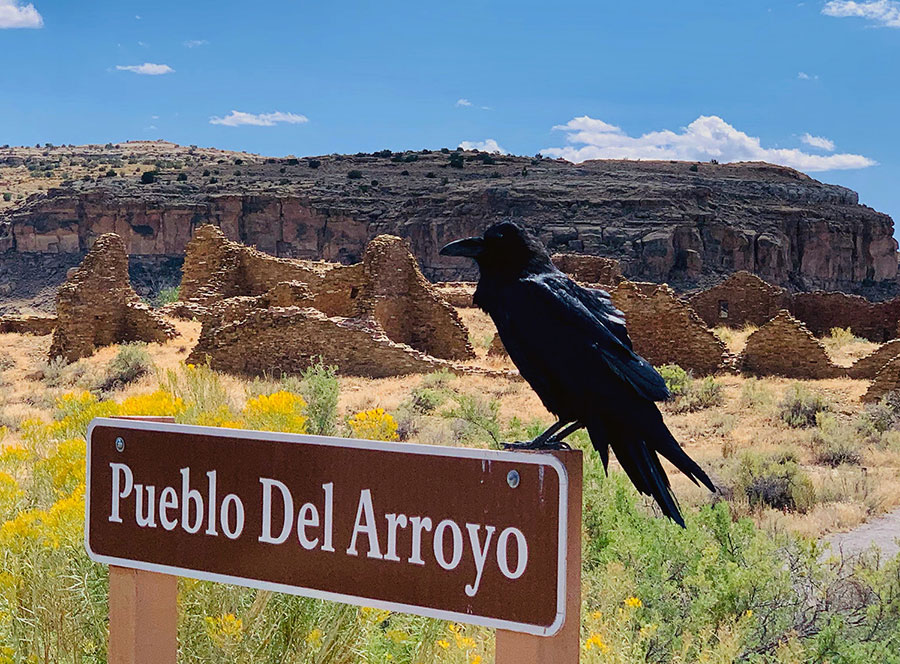 Chaco Canyon, despite its long winters, short growing season and marginal rainfall was a ceremonial, administrative and economic center that became a hub of regional native culture. Monumental architecture and a prehistoric 400 mile carefully engineered network of roads was used to transport goods such as chocolate, seashells and copper bells from as far away as Central Mexico. Hiking up to the Pueblo Alto Complex, which required that you traverse a 200 foot, very narrow slot, you are rewarded with 360 degree views and can see the remnants of the ancient network of roads. Building began here around 800 and between 900 and 1100 evidence indicates that Chaco was the center of a far reaching trade network. Massive multi-story stone buildings were constructed many of which are oriented to solar, lunar and cardinal directions and some of the great houses had astronomy markers. 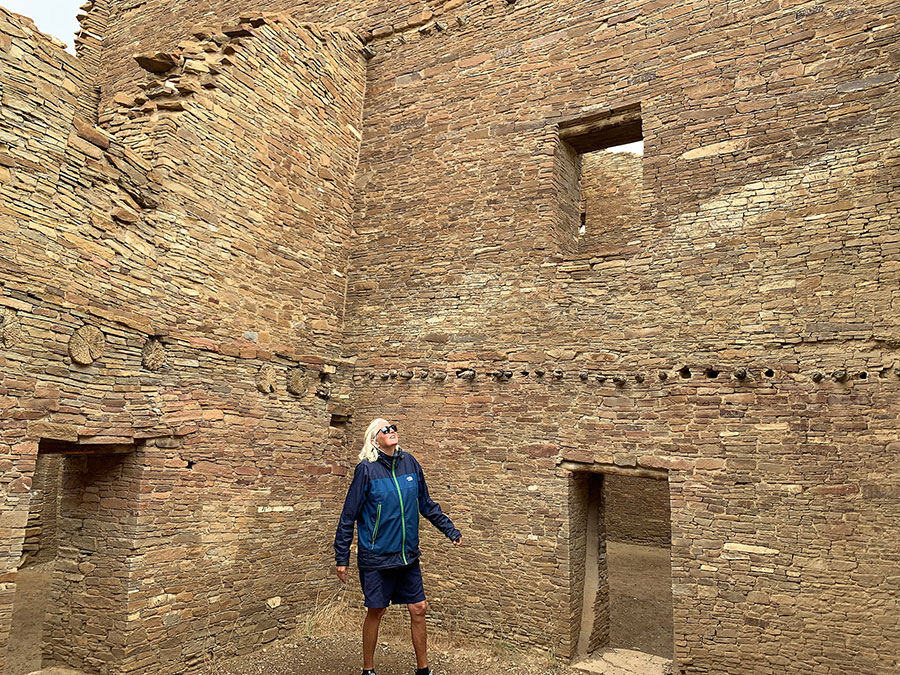 When you visit each of the great buildings you get a clear sense of how line of sight was also a part of the decisions on where buildings would be placed. We were fortunate that the moon rose late as the night sky here is extraordinary, billions of stars and the vast Milky Way Galaxy held us transfixed. We were also able to take part in the star program since the park has several large telescopes and an observatory and we attended a lecture on the pottery of Chaco. 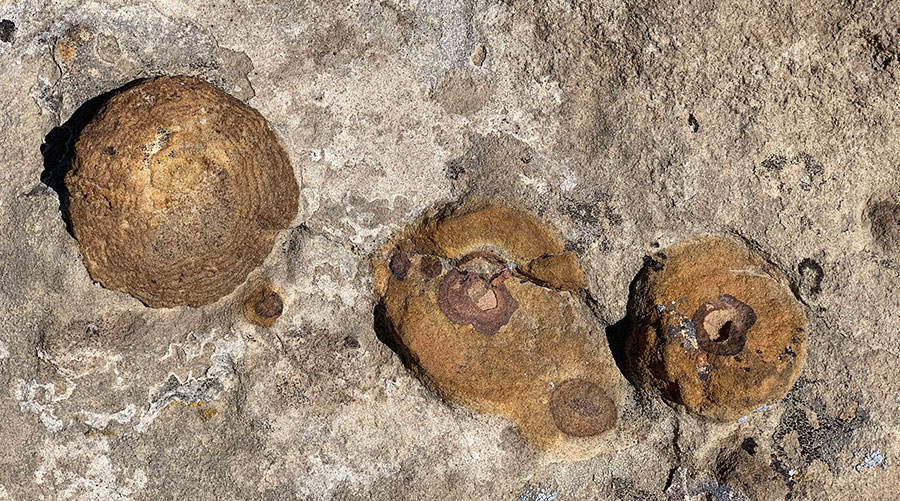 Hiking through the Canyon people have respectfully placed the abundance of poetry sherds on walls for others to admire. The sandstone trails reveal other early life, as you walk across mesa tops you are reminded that the land you traverse was once tidal, a part of the barrier-island systems of the Western Interior Seaway. The sandstone has done a remarkable job of preserving shrimp burrows, ammonite casts, and petrified wood. Marine reptiles, turtles and shark teeth fossils have also been found at Chaco. Particularly striking, which set us on a path to learn more about the geology, were the ancient shrimplike burrows that have become cemented by iron oxides. Plesiosaur fossil a very large marine reptile were also discovered.

There is much speculation on what became of the Chacoan culture, which by the late 1100s had shifted away to other regional centers such as Aztec, Mesa Verde and the Chuska Mountains. Today, many of the Southwest tribes are descendants of Chaco including the Hopi and Navajo and they view this fragile place as sacred, a spiritual home to be honored and respected.

A video of Chaco that was shown at the visitor center honoring the wisdom of the Northern New Mexico pueblo people talked about the mass exodus from this cultural hub, likening it to the movement of clouds, the impermanence of life. Sitting in camp after a long day of hiking was a time for quiet, peaceful reflection. Did the Chacoan culture simply shift and change, was there a traumatic event that set the exodus in motion, or was it simply time to move on? 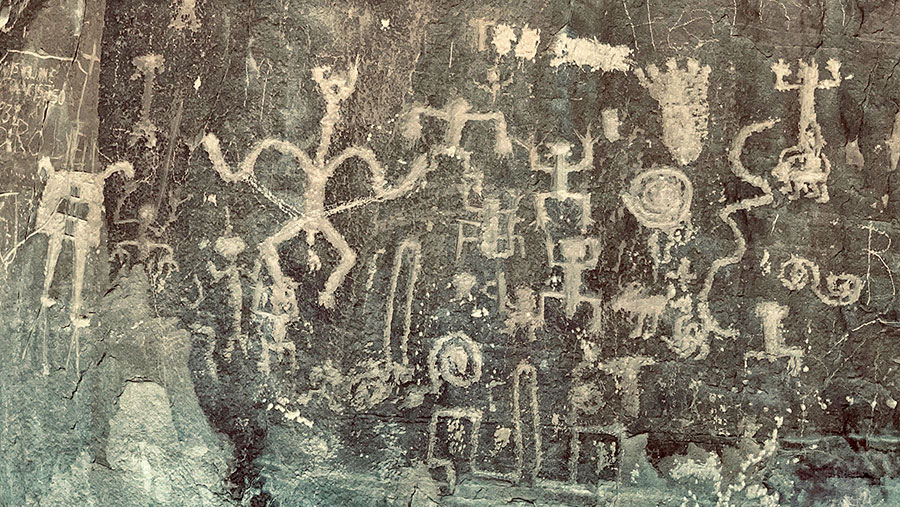 Often in the course of our work we envision the next step, the transitions we undergo on the journey to health, the losses we experience, in our own lives, the lives of our clients, and in our communities. What heightens our consciousness and opens us to experience shifting landscapes with a deeper understanding of our own nature and the larger natural world? What are the lessons of Chaco? The ability to recognize that within impermanence traces of our origins remain. That even seemingly advanced societies will fail, yet people rise up from adversity and move beyond limitations to embrace new horizons. 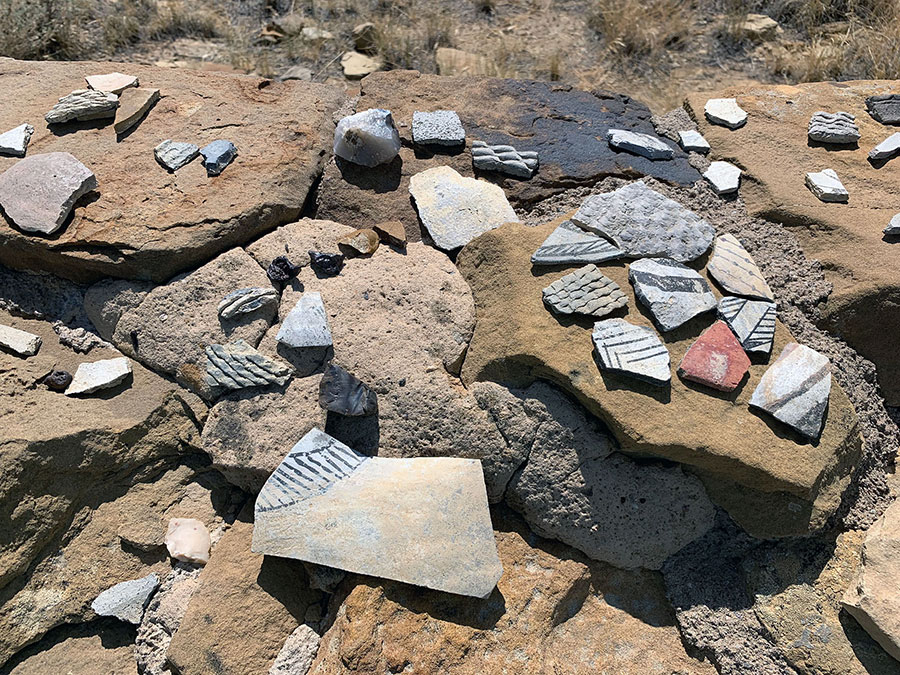 It’s hard not to reflect on the pervasive trauma that impacts the lives of so many people around the globe. Events that set circumstances in motion that can be harmful or threatening and have lasting impact on physical, emotional and spiritual well-being. Yet there are amazing individuals who despite the events that help to shape their lives rise above them to move in previously unexpected directions. Research demonstrates that just one positive person in the life of a traumatized child can aid in offsetting horrific experiences and guide them toward a positive and productive life. Somehow, whether through our work, community resources, just being with someone to hold space people find a way to cope. Within the events that limit there are also deep insights that can guide the journey toward the other side, able to ascend and move outward in previously unexpected directions. May each one of us find our path home and serve as a guide to those seeking a new kind of home.

Blessings from the Mothership

Donna and I were recently interviewed by Julia Griffin for her new free online summit which will air October 1st to 14th, 2019. Our interview, Sound, Nature and an Integrative Life for Expanded Consciousness and Health, will air on September 7th. This speaker series explores the power of connections, identifying strategies to engage in life more fully, to identify what brings you peace and joy and a true sense of purpose. Julia has gathered an interesting group of speakers, expert teachers, healers, coaches, and educators who each share their skills, to support healing and growth, offering suggestions to aid in transforming the patterns that limit your life while tuning into higher frequencies on a path toward heightened consciousness and health. Click on one of these links to reserve your spot -