A Door Into All Possibilities 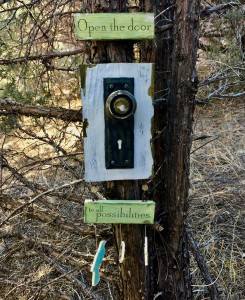 A walk through the woods on our land brought me to a hidden grotto, a memory palace opening a door into all possibilities. This serves as a fitting reminder as we celebrate the Lunar New Year, welcome the Year of the Dog in the Chinese Zodiac and explore themes associated with Uranus the awakener. There is so much potential for our future. Each of these events plays a role in the seismic shifts currently underway in the political landscape, a potent reminder of the possibilities before us in 2018.

On January 20 we entered the sign of Aquarius ruled by rebellious Uranus and remain in this sign until February 19. The qualities of Uranus were evident on January 21, 2017 and again on January 20 and 21 of this year, when millions of women around the globe marched in coordinated mass rallies to advocate for women’s rights and to protest the misogynistic treatment of women. Often referred to as the Planet of Rebellion or the Great Awakener, Uranus supports illumination, independence, humanitarianism, egalitarianism, interconnectivity and intuition in its search for universal truths. Another key aspect of Uranus is to break-down or demolish established patterns or structures that have out-lived their usefulness to replace them with creative new structures. The qualities of Uranus are reflected in the positive actions and courage of women who will no longer remain silent for fear of reprisal as well as the emerging Power to the Polls movement.

Since the first march in 2017, reported as the largest single day of protest in history, women refuse to be silenced or shamed. The fight for equal representation, putting an end to sexual harassment, abuse and misogynistic behavior are witnessed in the birth of the #MeToo Movement and the Time’s Up Legal defense fund. Power to the Polls is a unified call for equal representation in government as men and women work to end systematic gender inequality imbalances of power and abuse and harassment directed at women. Of particular note, recent reports indicate that in the 2018 midterm elections in the US more than 390 US women plan to run for the House of Representatives and a reported 49 will seek Senate seats. This surge in women hoping to create significant change extends to races for governor as well as state and local elected positions. The mission put forth by Times Up is clear: “No more silence. No more waiting. No more tolerance for discrimination, harassment or abuse. Time’s Up”

Although I appreciate the sentiment of Times Up, I prefer We’ve Only Just Begun, which feels like a more fitting message for those of us who engage in the intentional use of sound vibration to shift consciousness. We’ve only just begun to open and explore the doors offering infinite possibilities and potential for global shifts in consciousness through the use of sound. One example, the Ohm/Uranus 5th Interval which opens with the electrical charge of transformation and possesses the ability to shatter preexisting conceptions of reality and structure. It embodies the energy of freedom and independence. The Mars/Venus 5th serves as bridge between the disparate parts – engendering a balance between head and heart, male and female, yin and yang to promote non-duality and as Lynn Wedekind proposes in this month’s astrology contribution the ability to create a World United in Love. Paul and Jude Ponton remind us of the critical importance of Source Points to access deep issues and promote growth and transformation. All of which begins with self-care, a great new addition to the monthly newsletter, written by Judy Bernard. We must tend to our own physical and emotional health to be fully present to help those we serve.

A call to action addressed to each of us is to sound the gongs, ring those chimes, sing out loud and clear in solidarity as we unite from a place of love and compassion. Use our resonant group frequency to unearth the shadow and shift into the golden light of a new dawn.