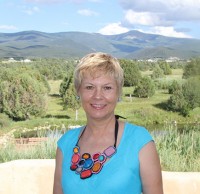 Oxana Merimskaya is an MD and PhD in immunology, and a licensed acupuncturist in Russia. She is also a teacher at the International Su Jok Academy, in Moscow, Russia. She has been a Su Jok therapy instructor since 1993, and has taught more than two hundred classes throughout the world, in Russia, Ukraine, Kazachstan, Sweden, Chech Republic, Hungaria, Greece, Italy, Great Britain, Iran, and the USA. She has also presented at the ICMART Congress, International European Acupuncture society in Copenhagen, Denmark; International Congress 50 years of acupuncture in Moscow, Russia; Congress of Traditional Folk Medicine in Moscow, Russia and the 4th Baltic States Congress of Medical Acupuncture and Alternative Medicine in Jurmala, Latvia. She has also participated in TV shows about Su Jok in New York, Moscow, Athens, Novosibirsk, and Almata.

Oxana is a Certified Acutonics Practitioner and a Certified Teacher of Acutonics I-IV. Prior to 1993, after completing her studies at the Sechenov's Moscow Medical Academy Oxana worked in Hamalea's Institute of Epidemiology and Microbiology in Moscow as a senior scientist in the field of stem cell research. She has also worked at the National Institute of Health in Helsinki, Finland. She has authored more that 50 articles which have appeared in leading scientific publications, and presented at numerous scientific congresses, and conferences. She is also the author of numerous scientific patents.

Oxsana has translated the syllabi of Acutonics Levels I-IV into Russian and is the Author of the Russian Acutonics Book “Acutonics: Sound Healing. Treatment with Tuning Forks through Acupuncture Points”