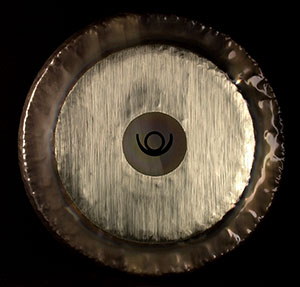 The Pluto gong resonates at the approximate musical note of C#. Pluto represents the last frontier, the underworld, hidden riches, the deep and mysterious.

The planet Pluto represents our farthest reach into the solar system, as distant from the sun as we have yet allowed ourselves to venture to. On the physical plane, Pluto is a place of cold and shadow, far from the warmth of our beloved life-giving star, and yet it is an integral part of our solar system, rotating as steadily around our sun as any of the other planets. The vibration given to us by Pluto guides us to let go of trivial attachments to the material world, healing obsessive behaviors and mired thought patterns. It brings the darkest parts of us into a balanced orbit with the brightest and warmest aspects of our natures. A Pluto sound bath restores balance to polarities within our psyche that threaten to break apart, addressing mental illness manifested by feelings of fragmentation and inability to feel compassion or empathy for others. In a therapeutic setting, the Pluto gong may be used to treat conditions of toxic accumulation, inadequate elimination and growth stagnation. Cell formation and proliferation is deeply affected by Pluto, indicating potential in treating cancerous growths, lacerations and tissue damage.