Dori Miller began her studies in 2005 with Maren Good in Westfield, NJ. She completed Acutonics I, II, III, IV and Sedna with Maren and has also studied with Ron La Place (Fibonacci). A senior at Mason Gross School of the Arts at Rutgers University, she is currently applying to graduate schools to obtain her Masters in Fine Arts.

Dori Miller began her studies in 2005 with Maren Good in Westfield, NJ. She completed Acutonics I, II, III, IV and Sedna with Maren and has also studied with Ron La Place (Fibonacci). A senior at Mason Gross School of the Arts at Rutgers University, she is currently applying to graduate schools to obtain her Masters in Fine Arts. Art, and her work with Acutonics, helped Dori to redefine her life, to shift from a place of anger and negativity to leading a more positive and proactive life. As a student practitioner of Acutonics, Dori’s artwork, in part, was inspired by her work with Acutonics tuning forks. Her broad interests in Astrology, Astronomy, Chakras, Sacred Geometry, Shamanism and Sound helped to shape the vision for the series of paintings she shares with us entitled Vulcan Chess. The original paintings are on hand stretched linen with copper nails. Eight of them are 25” x 50", and the ninth is 10” x 20". The shape was meant to evoke doorways or portals. Dori’s influences so clearly support the Acutonics vision: to return art and spirit to medicine. It is a pleasure for us to share them with you.

Dori submitted the following artist’s statement and photos of her artwork. 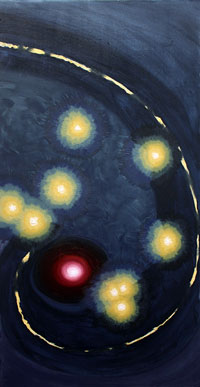 Before I became an artist, I lived in a space of anger, protest and rebellion. Eventually I realized how this negative churning energy was not getting me anywhere. Why not come up with a solution instead of cranking about the problems? How could I do that? Could I work it out in my art? If I could, maybe it would give someone else an idea. Perhaps my work could make someone feel better if I work in a more positive and proactive way. I enjoy this trajectory immensely and how it informs the directions of my path. My interests lie in combining the abstract with the figurative. I strive to capture the space between worlds, what lies just out of view. Perhaps it is a chase to make the metaphysical tangible, or bear witness to a moment in magic. Or the sitting in that stillness and not chasing what was almost seen. I like to experiment with what feels present, then vaguely not, just left of the periphery. I had a realization that everything I have done in recent years has been an exercise in combining the physical with the metaphysical and that I had a preoccupation with portals.

Check out the exhibition via video

About one year ago, I began to wonder about the connections between the different beliefs I have been exposed to throughout my life. They were so vast I literally could not imagine them in their singular totality, let alone overlapped together inside the same place. I decided to attempt a mapping of these systems into physical space and to have this conversation on linen. The realms I contemplated were Acutonics, Astrology, Astronomy, Chakras, Sacred Geometry, Shamanism and Sound. Others came into the mix and many systems fell off of the equation due to the mental weightlifting of the endeavor. After much consideration and exercises in detachment, I decided on the final list for my purpose. The rest would reside within the series’ origin story.

Vulcan Chess is the series of paintings that demanded creation. The first element to manifest was the shape of the canvases. I wanted them to feel like doorways or portals. I started with an attachment to the idea of eight. A constant concept and inspiration in my life  has been the Fibonacci Spiral. This had to be the foundation for the series. As the paintings began to form, a serious threshold guardian stopped me in my tracks and landed me in the hospital twice last Spring. I painted the paintings in my mind while in recovery, then sketched their research out on paper when I was home. Finally, healed enough to paint again, the paintings poured through me onto the linen almost effortlessly, since they had already been realized twice before. 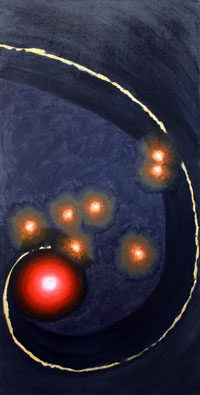 Next, the Chakras came into play and I was drawn to work with my beloved Acutonics planetary tuning forks. I learned a Chakra-balancing protocol during one of my core classes with Maren Good, and was drawn to integrate the Chakras into my painting. From there, I matched the tuning forks with their associated constellations. In my research, whenever I came across a planet that ruled two constellations I chose to depict both. The constellations were projected from a star map in order to place them precisely onto the canvases.

There are the seven customary Chakras, and I had eight canvases. I felt that I needed to add Earthstar (the Chakra about one foot below the feet). Somehow, now the eight seemed off and I added Soulstar (the Chakra approximately six inches above the Crown Chakra) as the obvious Capstone and the entities were complete. Since I only had eight large doors available and the paintings were demanding to be painted (they had waited long enough), Soulstar was painted on a readily available and much smaller canvas. 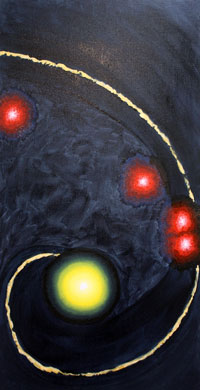 The corresponding tuning forks and constellations were quite obvious for the main seven Chakras, so what of Earthstar and Soulstar? Much time and contemplation of the tuning forks made the answers more accessible. Earth for Earthstar obviously. But what of Soulstar?  Research confirmed that the associated planet was Quaoar. I had a physiological reaction when the Asteroid tuning forks appeared in my mind to be the colors that would visually inform and represent Quaoar. I wondered why they had not been the obvious choice to me from the start.

Another conundrum during research was that I could not identify associated colors for either the Earthstar or Soulstar Chakras. My initial artist inclination was to make Earthstar a sage green, which I actually mixed. When I added a swatch to the previously mixed Chakra color chart, something was not right, so I kept searching. I found a remote suggestion that Earthstar vibrated at the color of deep infrared crimson, while Soulstar was red violet. It was not until I lined up all of the Chakra colors that I saw it. Of course these are the correct colors, they are in a Rainbow succession! 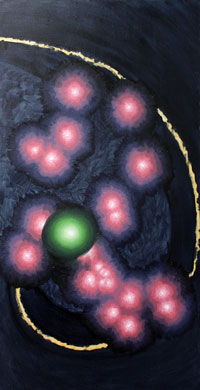 Before painting could begin, I needed to decide which constellations to use for Earthstar and Soulstar.  I sought the advice of Jennifer Gehl. She recommended Venus and Libra for Earthstar. Soulstar remained elusive. In June of 2016, I was still stuck on this question. I had spent too much time in research and hit a wall, which started to stall the flow of my work. As I sorted through my research, something shifted. I decided to jump off of the proverbial cliff and landed on Ophiuchus as the constellation for Quaoar and Soulstar. Again, once I became familiar with Ophiuchus, it perplexed me that any other entities could ever be considered. Ophiuchus was the only choice from the beginning, although I did not know it at the time. 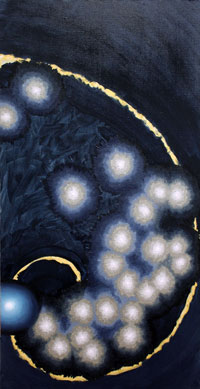 One of the most satisfying and delightful periods of my life was when I mixed the colors to match the glorious colors of the Acutonics tuning forks. I mixed the planetary fork colors to depict the Constellations in the paintings. Chakras have their own associate colors and they were mixed next.

After all of the colors were mixed, and the Constellation and Chakra locations were mapped out, I hit another wall. Tremendous feelings of overwhelm hurricaned around my consciousness and I froze for a moment, as my mind looped back and forth through my research boards and the colors I’d mixed. It became so swirly that I did not think I would ever begin painting. I cried, “This is like playing Vulcan Chess!” And the title of the series was born. 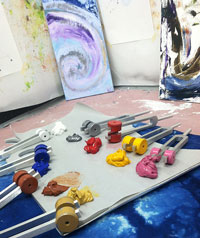 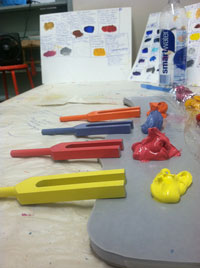 corresponding tuning forks in interval with Mid-Ohm at the contralateral corners of the paintings, just like an extraordinary vessel. The interval for the Chakras was circled counterclockwise on the canvas (because the paint was fresh) around them, then clockwise, just like in a treatment session. The forks were then circled the same way, “off-body,” right over the Chakras. All intervals were traced along the Fibonacci spiral, travelling from the starting point up and out of the canvas. 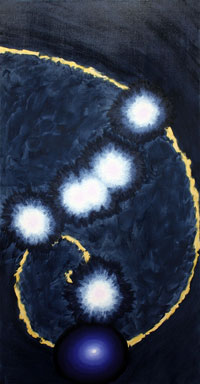 The final element I felt compelled to include was to honor the four directions. The Shamanic colors for North, East, South and West were painted on the directionally appropriate borders of the canvases so that the paintings were all framed by the Four Directions.

With kind permission, Maren Good and Michael Ungar’s Planetary Gongs at CoSM was played during the entire week of the Vulcan Chess gallery exhibition. The lights were lowered and guests experienced the paintings as intended. The paintings cured and finished drying in the vibrations of a weeklong, stellar gong bath. I am in love with these paintings and how they have dictated their own creation. I did not realize until they were finished that I had not made a single aesthetic color choice. They told me how to give them their colors.

Vulcan Chess was finished, critiqued, displayed and exhibited in September of 2016. A couple of weeks later, during class in art school, a classmate complained how NASA had added a thirteenth sign and that all of our zodiacs were shifting. I listened and somehow knew something.  The physiological weirdness tingled around my edges again and I did not know why. In a building and mysteriously knowing glee, I asked her what the name of the new sign was. She said, “Ophiuchus.”  I ran out of the classroom and back to my studio to look at my research board and there it was. The Snake Charmer. 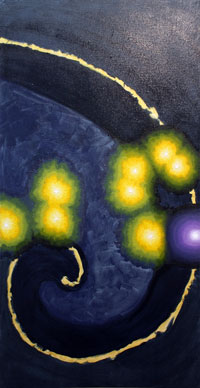 There were many facets of research that I considered adding during the planning stage. They all offered valid visualizations, such as the symbols for the constellations (scales, fish, water, etc.), corresponding planetary glyphs and the endocrine organs associated with the Chakras. Although these are some of the ideas that did not materialize, they are part of the series’ origin story. The organ connections, however, are different. I wondered if I should find a symbolic representation of the glands for the paintings. Upon extensive meditation, the answer was no. The glands are in the beholder, connecting to and completing the paintings.

I was very grateful for the positive response I received for my Vulcan Chess exhibition. However, it is a special joy for me to share these paintings with my Acutonics community, for you will know my paintings completely upon first glance. 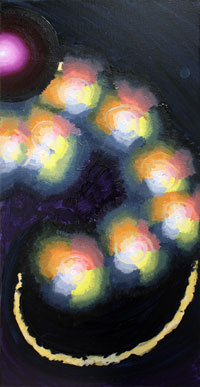