Home » Our Story » The Mothership » Blog » New Horizons
Our Story 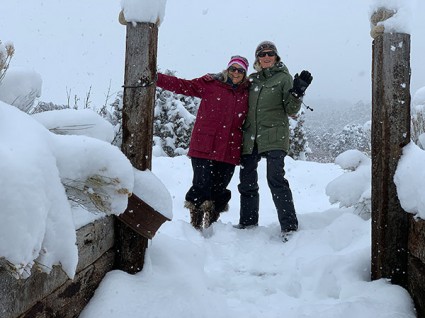 It is still and quiet here at the Mothership providing ample time for reflection and genuine wonder at the abundant gifts from nature. As some of you may have seen from Ellen’s Facebook posts we have been blessed with an abundant snow fall. As we write this on New Year’s Day 2019, the snow is falling at about two inches per hour, with more than two feet on the ground and no end in sight. We are taking frequent breaks to shovel but can’t help feeling the powerful influences of Sedna.

The theme for 2019 is New Horizons – something we’ve spent considerable time exploring in many aspects of our life and work. Recently, with the help of Ron La Place, Erin Taylor and Dorothy Wallis we’ve entered into a dialogue born from our explorations of the waters of the far North, the Phi ratio and the tremendous insights that blessed us in our journey to the lands of Sedna. As we’ve witnessed first-hand and seen in the newest climate reports the Earth is critically stressed and at no time in our lives, have we needed the energy and wisdom of Sedna more. At the heart of our vision for this year is the exploration of ways to deepen our Acutonics curriculum, strengthen our global community of students, practitioners and teachers and to address the most challenging issues of our time.

From an astronomical perspective the word Horizon refers to the point or visual boundary where the sky appears to meet the ground or sea, or the intersection point of the Earth and Heavens — the Two Treasures. Expanding on this concept an Event Horizon is the boundary around a black hole from which nothing, not even light can escape. This is defined as a point of no return a boundary at which gravitational pull becomes so great escape is impossible. But, we question, whether escape is ever impossible. Don’t we have the inherent ability to transcend this to not be sucked in to the black hole of the same old same old, negativity, addictions, failed communications, judgement, programmed thinking, traumas and lack of hope. We can and must break through all that limits or constrains us to transcend gravity and move into a new creative spiral – a new life rooted in co-creative models, super-conductivity, super fluidity, as brought forth through Sedna we have the ability to co-create a new cosmic perspective and a new Earth consciousness, this is the Third Treasure — Humanity.  Our heart is open, and we are able to meet and look beyond the fixed and static horizons to embrace the dynamic and infinite.

If we embody this concept, rather than feeling powerless we have unlimited power to move through time and space – Earth and Sky – to create a New Horizon that transcends duelist thinking to embrace a true alchemical creative process, the frequency of light – think of the Hopi Ladder that allows us to move through time and space – from Earth to the Heavens, transcending all that binds us to co-create a new future.

…and we on frozen roads
snow-blind
feeling for a coastline
some rim to test
what dwells
in the essence of a thing’s private
nature
despite impositions
of self-will and rituals of appearance
we plead with the unknown to come to us
yes, beg the sky
beg the rich treasures
of darkness
beg for revelation of an
unknown god
the folding open
of self-concealed hidden spaces
spaces that invite us traveling…

New Horizons is also the name of the first mission to the Pluto System and the Kuiper Belt, which launched on January 19, 2006. In 2015 it reached Pluto where it conducted a six-month long study of the planet and its moons. On New Year’s, it flew by Ultimate Thule a Kuiper Belt object a million miles past Pluto as it continues its mission to help us understand worlds at the edge of our solar system. This object is so old and pristine that it's essentially like going back in time to the beginning of our solar system. Just as understanding the Inuit Thule culture takes us back to their early migration patterns and a deeper knowledge of living in the elements.

The Kuiper Belt which is beyond the orbit of Neptune, is sometimes called the third zone of the solar system, millions of small, icy objects in this region, including hundreds of thousands that are larger than 60 miles wide. Some, including Pluto, are over 600 miles wide. The belt occupies an enormous volume in our planetary system, and the small worlds likely have a great deal to teach us about the solar system's early history.

May 2019 bring you great insights, growth, creative inspiration and joy as we treverse the internal and external Universe transcending all that binds us to expand our horizons and co-create a new future.