Home » Our Story » The Mothership » Blog » An Interview with Erin Taylor: Energy Facilitator and Acutonics Practitioner
Our Story 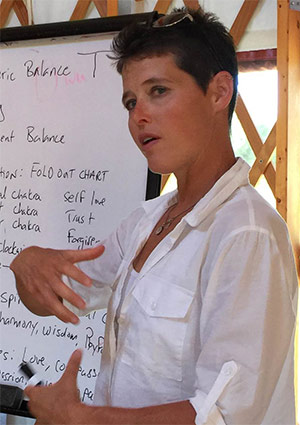 Erin Taylor grew up around music. Her mother played the piano. Her sister grew up to compose classical music. And Taylor played music by ear and sang. Though she didn’t just sing—a friend of the family was a music producer, and he’d sometimes record Taylor and her brother and sister. She’s been immersed in sound, then, for as far back as she can remember. So of course Acutonics would find her. “I had a deep connection with music and sound from an early age, as it seemed to soothe and bring a sense of peace to me,” says Taylor, who has studied Chinese medicine and acupuncture.  “So sound in my journey has been very peaceful.”

Fascinated as much by energy, too—what energy is, what’s the energy behind everything, where does it come from—she took a fairly traditional path but had been a pretty non-traditional thinker. She got her BSC in kinesiology at the University of Calgary. Even though she’d participated in a variety of sports growing up, and competed on the Canadian National Team for the long course triathlon, her interest in kinesiology went way beyond its athletic applications. “It was through my deep focus and training of the physical body that I came to understand that there was more than just a physical body,” says Taylor. “I was able to tap into an energy that seemed to just flow, where I was able to experience almost effortless movement where it should have been taxing and effortful. This led me to want to understand further what this ‘energy’ was.”

Her a-ha moment (though she continues to have a-ha moments frequently) came during a workshop on sacred geometry with Ron LaPlace an Acutonics instructor. “I was very interested in understanding that the needles were one level of vibration,” she says. “I understood that creation comes from sound, the sound creates a geometry, and that geometry is the anchor for form.”

The tuning forks and the gongs—basically, Acutonics—enhanced all that she’d been doing with acupuncture. Sound deepened it. Sound alone—without the needles—deepened it. Took her deeper, took her patients deeper. Enhanced her awareness and understanding, made her even more curious. “It has totally opened me up as a person,” she says. “It has given me a lot of answers and confirmations. As a kid what I was told was life and reality—it wasn’t. Acutonics opened that up to me.”

It has also deepened her practice, and her connection to other people, to herself, to nature.

“The soul responds to sound,” she says. “And once you understand that and feel it, that leads to a deep remembrance and relaxation. Sound gives it that vertical depth.”

And that feeling can stay with a person for days.

Now certified to teach all levels in Acutonics, she also realizes how deep a practice it really is. “This trip made me see how much I didn’t know,” says Taylor. “It deepened my practice again. It’s such a broad study. I’m very humbled by it.”

And she’s excited about passing on that knowledge to others. “Everything’s already whole and complete,” she says. “These tools—the tuning forks, the gongs—are remembrances of that. It’s really fun. And if it can create that space for that person to remember that greatness, then great.”

But she is not a healer. “To say I’m healing,” she stresses, “that is so not correct. I’m setting the stage for that to happen. I’m a facilitator. A stage setter.”

Certified to teach all nine levels of Acutonics, and having taught monthly Acutonics workshops and study groups for students and practitioners throughout Canada now for several years, she’s particularly excited about the deep energetics known as the Eight Extraordinary Vessels (which assist in the alchemy of emotional energies and patterns). And getting at them in a way that incorporates her love of nature and the outdoors—through the creation of gardens and stone sculptures with certain geometries. Something fully embraced by Ellen Franklin and Donna Carey, Acutonics’ founders.

“I’ve been experimenting with coherence and coherent systems, and ways to bring a person to a level of coherence and alignment through sound and these Eight Extraordinary Vessels,” says Taylor. “And Ellen and Donna have been wonderful in pushing me to do all this. They encourage creativity and experimentation. They give you freedom.”

And they’re all after the same goal. “We’re all looking for that wholeness,” says Taylor. “And if I have a goal, it’s to try to understand, What is that energy? And I love being in my physical body and experiencing the physical combination of having that connection to all. If there’s a goal, it’s to remember who we are.”

Energy. Energy connected to other energies.