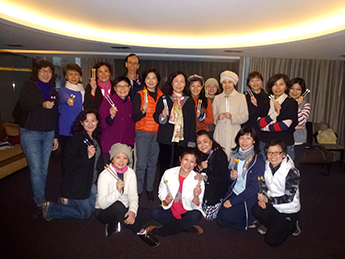 For nearly a year Sande McDaniel and Ellen Franklin have been working with Xynergy on the creation of this new website and a presence on social media. At the beginning we knew this was a major undertaking but the entire process has been beautifully guided by our team at Xynergy. We hope you enjoy this new site, and find it much easier to read and explore.

Many people in the Acutonics community have made tremendous contributions as well. Acutonics practitioner Patrice Repar provided the home page recording and Certified Acutonics Practitioners Heidi Irgens and Valerie Carpenter produced the new videos that appear here and on the Acutonics u-tube channel as part of their thesis project. In the store you can also listen to the individual tuning forks and chimes; these recordings were made by senior faculty member Theresa Lee. Many of you have also sent testimonials and photos, and it was especially exciting to create the community section for this new website to show our growing global community of practitioners. The photo to the left was provided by faculty member Ling Chen who is teaching Acutonics in Taiwan to an amazing group of students, who already have a very active Facebook community.

Giving back and reaching communities that are underserved has also been a major focus since the creation of Acutonics and the founding of our company. Acutonics practitioners have brougth this work into the jails, schools, veterans clinics and so many other significant places. One example of this is the WU Project, the new not-for-profit created by Senior faculty member Alicia Villamarin and Acutonics Practitioner Maria Romero to bring effective Chinese traditional health care practices to medically underserved communities in remote areas of the world.

We hope you'll share your stories of Acutonics with us so that we may share them with the growing global Acutonics family.