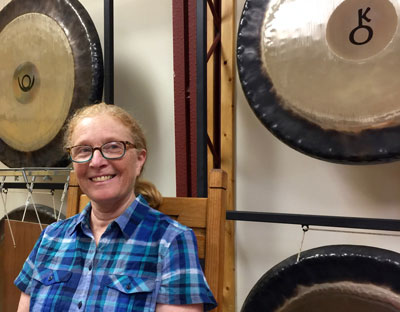 Laura Herman has been practicing Acutonics techniques for over eleven years. She lives in a small house surrounded by trees, a creek, and many wild animals. This quiet setting is perfect for meditation, yoga, reading and writing. Recently retired she intends to focus on her writing (currently working on two novels) and to continue with her hobbies, which include hiking, photography and book club.

Recently retired from a 31-year teaching career, Laura Herman and her husband Mike Aplet recently stopped by the Mothership. They are on a postretirement, somewhat spontaneous camping trip across the Southwest and on toward Chicago to visit with their daughter Naomi, and then back west to Seattle.

It was an impromptu trip in 2005 when Laura first visited the Mothership and was introduced to Donna, Ellen and Acutonics. At that initial meeting she learned that Katie Mink and Laurie Herron were teaching Acutonics in Berkeley and she would return home and complete all of her Acutonics classes, while simultaneously teaching high school students, biology and environmental sciences. Laura is almost done with certification with just her thesis remaining. She is considering several projects. However, as a teacher for more than three decades one idea is to create learning aids, in card form, for students of Acutonics.

Reflecting back on her initial trip to New Mexico she remembers it as a time filled with deep emotions. “My father in law had been very ill and passed just 3 days before his birthday. Our older daughter Molly and her dear friend Ariel (Ellen’s daughter) came home from college to find summer work in San Francisco. Our younger daughter, Naomi celebrated her 18th birthday and was poised to graduate high school and set out on her own adventures. We were about to enter the empty nest phase and had planned a trip to Seattle. When the jobs in San Francisco didn’t work out for Molly and Ariel, Ellen offered them a summer internship at the Mothership. We had never been to New Mexico, so we changed our road trip from the Northwest to the Southwest”.

Laura described this first trip as a spiritual journey, where each step along the way they were greeted by something unexpected. 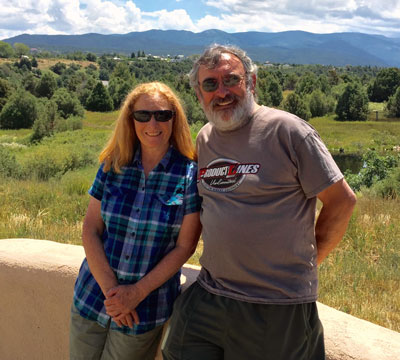 “We arrived at a lakeside campground just as the last metallic colors of sunset reflected on the lake. At sunrise we discovered bright yellow sienna flowers surrounding the lake and filling the spaces between campsites. The second morning as we reached the summit of the Sierra’s three men appeared along the road. The man in the center wore the earthy red and gold robes of a Tibetan Monk; the other men wore white dress shirts and slacks. One pointed to the east, surely a sign we were headed in the right direction. We continued to encounter beautiful scenes: dark stormy skies, rainbows, faces of elders in rock formations, desert varnish, and incredible light”.

After reaching Llano they spent a few days with Molly and Ariel and of course they visited the Mothership. “I remember being awestruck by the numerous projects, sharing lunch at the picnic table near an arch of chimes swaying and singing in the high altitude breezes. On the last day, Donna took a set of Ohm forks and ran them down my body, grounding me. I loved the sensation and headed home with a set of Ohm forks and a copy of the book Acutonics There’s No Place like Ohm, gifts from Donna and Ellen”.

Over the next five years, Laura took classes with Katie Mink and Laurie Herron. ”I was intrigued and challenged by the rich layers of astronomy, astrology, mythology and the healing techniques of sound and vibration. Initially, working with the tuning forks, awakens the practitioner to the energy within and around us. This is a difficult experience to describe in words, but one of my clients gave me a great image likening her treatment experience to a peacock. As the forks ground and clear energy they also assist in opening and expanding our energy in a glorious manner, like a peacock fanning its tail, glowing in iridescent blues, greens and gold’s.”

As a teacher, Laura tried several experiments with the tuning forks in the classroom with varying result. Initially, working with the Mars/Venus tuning forks, which some students liked, but others actually perceiving a shift in energy in the classroom became extremely resistant to their use. She also brought in Ohm/Saturn with the idea of creating more structure in the classroom. But, she feels that it backfired, as teenagers are incredibly resistant to having structure imposed on them. At an Acutonics class Laura shared these experiences with Laurie Herron who is also a classroom teacher. Laurie recommended that she share less with her students, and use the tools in a way that was more subtle. After some reflection Laura decided to bring in a Tibetan singing bowl and she began a daily practice playing the bowl in the classroom before the students arrived. “I used it every day to clear the energy in the classroom, getting into the corners of the room where energy can become trapped. Before the students arrived I put the bowl away. Once I began this daily practice, discipline problems stopped completely.”

Laura went on to say: “I liken Acutonics to a flower an organic blossoming. I think it relates to the way you’ve designed your programs. You train teachers, who train students, and the students that I’ve met in class enrich me as well. It is an opening to see things from a different perspective through their individual healing journeys.”

Acutonics has provided Laura with many opportunities to address troubling issues in her life. At one class, working with fellow student Valerie Carpenter, she recalls a sensation of pure joy. 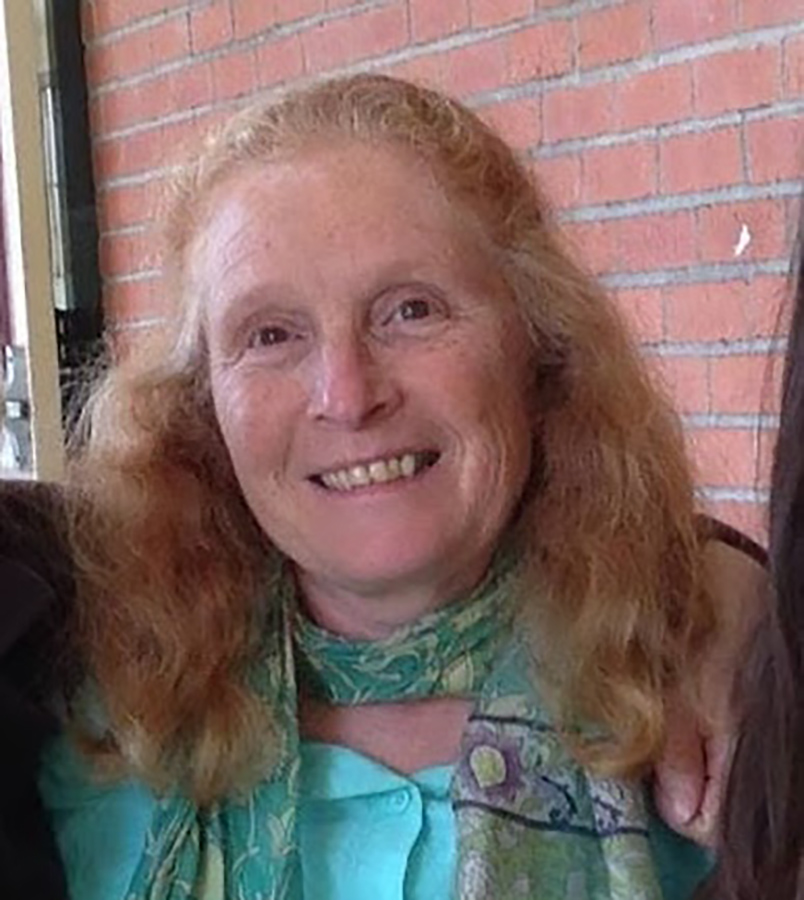 “I could feel the vibrations of the forks as Valerie waved them over my body. I was transported, as if into a dream, through a dark and starry expanse of space to a distant location where my younger sister (who had passed in 1998) was. She smiled and beamed with happiness. We held hands and together traveled back to Earth, where we met up with another sister. There was a sensation of pure joy of being back together again. Then we traveled back to Earth and picked up my mom and dad, and the five of us held hands and traveled back out into space; so delighted to be reunited as a family. When I opened my eyes, students were trickling back into the room ready for the afternoon session. I asked Valerie what forks she had used and she told me Pluto and Sun, which are used to shine a light on a deep-seated issues. I had been grieving both the loss of my sister and the division our family was experiencing at that time.  This healing experience showed me that a happy reunion can exist and I have come back to this image again and again for solace”.

At another class Laura remembers that she had been struggling with issues at work, so when Katie asked for a student for the practicum demonstration of Chiron Laura volunteered.  “The Chiron treatment with Katie steered me in a new direction that enriched my professional life in profound and satisfying ways. I had been teaching high school for some time and was having challenges with my boss. I was looking for recognition and freedom to choose what I would teach. I set my intention for the treatment with Katie. Within weeks, I had a position at a new school teaching elementary school. It was a real stretch, but one of the best decisions I made professionally. The position only lasted a year, but when I returned to the high school my relationship with my boss was much better and I began to work in leadership roles. I have also had the privilege of teaching many of those 3rd graders as high school students. This year, they graduated from high school and I graduated with them.”

Laura describes the past twelve years as a time when she has become more grounded, a better listener, with a stronger intuitive sense. “I feel a sense of calm inner strength that I have always yearned for; working with the tuning forks has contributed to my growth as a person. As I think about my future with Acutonics my sense is that I will continue to focus on self-cultivation, seeking ways to shine a light on myself and other people so that we nurture the part of ourselves that is brightest. I can only express gratitude and look forward to continued work in sound and vibrational healing”.