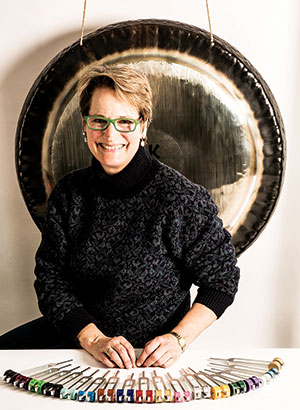 Joanie Solaini studied Music and English at Middlebury College and received a BA Music degree from the University of Southern California. She pursued a career in music for 15 years. A shift in direction led to Joanie engaging in the study of law at the University of Southampton in the UK, earning LLB and LLM degrees, and she is a member of the New York State Bar.

Intrigued by the world of sound healing, she went to a conference in San Francisco where she met Donna Carey and Ellen Franklin and took her first Acutonics class.  The event was a wonderful opportunity to put Acutonics into context within the myriad ways people explore and utilize sound, and to compare tools and methods across the board.  Her choice of modality to pursue speaks for itself.

Acutonics training was undertaken at the Mothership in Llano, NM and she is a Certified Acutonics Practitioner and Licensed Acutonics Teacher. Writing on sound healing and Acutonics, she contributed to Acutonics from Galaxies to Cells: Planetary Science, Harmony and Medicine and has written articles for other publications and newsletters.

Modalities that she has studied and integrated with her Acutonics  practice include Acupuncture (Healing and Acupuncture College, Jamie Hedger), Reiki Master (Linda Kinsella), Structural Integration (Equine School of Light and Sound with Patty Warren), and Transformative Medicine ( Center for a New Mainstream, Carol Greenhouse, Ruediger Dahlke). Joanie is also a keen singing bowl and instrument maker.  She teaches predominantly in the UK and Europe, and has an integrative practice with humans and horses in Wiltshire, UK.

"I have been an Acutonics Practitioner for 12 years and teacher of this system for ten. Every session, every class is testimony to the profound nature of this work. Over the years, in addition to sound healing sessions, I have incorporated Acutonics into my massage and reflexology practice. I have had the honor to participate in and bear witness to the deep shifts that clients and students experience with these planetary tunings forks, as well as other sound tools. Healing moves on all levels, and the prime "